Microgaming’s partnership with Foxium has produced many hits. However, the latest one might end up the best. Released in July 2020, the 3 Tiny Gods online pokie is Foxium’s most recent offering ... Read Full Review 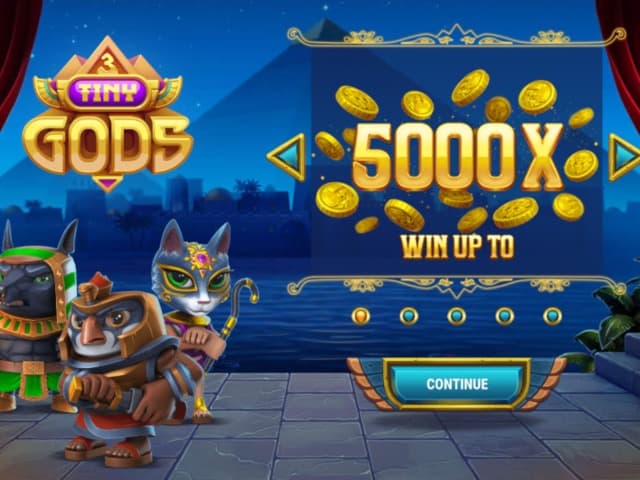 Microgaming’s partnership with Foxium has produced many hits. However, the latest one might end up the best. Released in July 2020, the 3 Tiny Gods online pokie is Foxium’s most recent offering developed exclusively for Microgaming. An easygoing pokie with plenty of interesting features, 3 Tiny Gods is worth the time for players at top pokie sites.

An ancient Egyptian pokie with a twist, the game is led by three charismatic characters based on Egyptian deities Bastet, Horus and Anubis. The three tiny gods will often appear in front of the reels, handing you godly gifts that should boost your payouts beyond your imagination.

Some might need a break from Egypt-themed pokies, but 3 Tiny Gods is actually one such pokie you shouldn’t miss.

The 3 Tiny Gods pokie comes with five reels in three rows placed against a background that’s heavy on 3D graphics. As an Egypt-themed pokie machine, the reels are populated by hieroglyphs and ancient Egyptian deities. Of course, the three tiny gods also make an appearance in the form of fully-animated 3D models that have a video game look.

Microgaming has been known for high-quality pokies and this one’s no exception. The video, audio and gameplay are top-notch. New players shouldn’t find it hard to play this Microgaming online pokie. It plays just like any video pokie with all the familiar buttons and features.

When it comes to the paytable, the pharaoh pays the most – 20 times your bet for five on a line. The 5x4 grid comes with 30 fixed betways. If you’re lucky to land the Egyptian characters often in the base game, you’ll be in for nice rewards.

Just like all Microgaming online pokie games, 3 Tiny Gods works flawlessly across a range of mobile devices. You can play it on your Android or iOS smartphone or tablet with ease. The touch-optimised controls are there to enhance your experience and the game scales perfectly on screens of all sizes.

Even if you’re a new pokie player, you won’t have a lot of trouble playing this newest Microgaming release. Place a minimum bet of 0.10 coins to start spinning. If you want to go higher, you can max your bets out at 50 credits per spin.

Of course, max bets mean chances for better rewards. Once the reels turn, you will be hoping for at least three identical symbols on one of the 30 paylines to hit a win. The Egyptian characters pay more compared to the card royals.

Whilst the pharaoh pays 20 times your bet, the highest-paying symbol is the wild – five of these on a payline will bring you a prize worth 100 times your stake. The gameplay in the base game is pretty grounded, but the real surprises await you in the bonus round.

The gods in this pokie game may be tiny, but their rewards are very generous, and the best pokies bonuses at Pokiesource could make them even better. There are three reel modifiers in the pokie game – Wrath of Anubis, Mystery of Horus and Gift of Bastet. You also get free spins, a bonus buy option and a jackpot amongst the 3 Tiny Gods pokie machine special features.

First comes the Wrath of Anubis free spins round. Three bonus symbols on reels 1, 3, and 5 will give you eight free spins. During this round, all low-value symbols will be removed so you’re only left with the high-paying ones. You can also earn even more free spins thanks to the ancient Egyptian god of death, Anubis himself.

The other tiny gods are also attached to features. The Gift of Bastet can occur randomly on any non-winning spin. Bastet re-shuffles the reels to possibly create stunning win combos.

The last feature is Mystery of Horus. This one can make the eye cover two or three adjacent reels – once the stacks shatter, they may reveal a common symbol that can result in a nice return.

Finally, the 3 Tiny Gods pokie also comes with a jackpot bonus. During the base game, if a bunch of coins appear on a symbol, they are collected in a pot atop the reels. When full, it will trigger the jackpot bonus and award you one of three rewards: A Mini jackpot is 15 times your bet, Midi jackpot is 100 times and Maxi jackpot is 5,000 times!

The 3 Tiny Gods pokie by Microgaming has a pretty solid RTP of 96.4%. It’s a medium volatility pokie loaded with special features so you can expect solid returns. If you’re lucky, the gods can grant you a treasure worth 5,000 your stake – for a maximum win of 250,000 credits – which isn’t bad at all, especially in you take advantage of no deposit bonuses available at Pokiesource.

3 Tiny Gods by Microgaming – Our Verdict

The 3 Tiny Gods online pokie has 3D graphics, excellent design and plenty of special features – what’s not to like? Microgaming’s 3 Tiny Gods pokie will surely end up one of this summer’s biggest hits. The cutesy tiny gods look great and are pretty rewarding. Get to the bonus round and you can count on amazing returns. Play 3 Tiny Gods as a real money pokies game now to experience ancient Egypt in ways you never had before.