As one of the world’s greatest living rockers, Alice Cooper deserves recognition. He brought shock rock on the heavy metal scene and left a deep mark in an industry that he singlehandedly ... Read Full Review 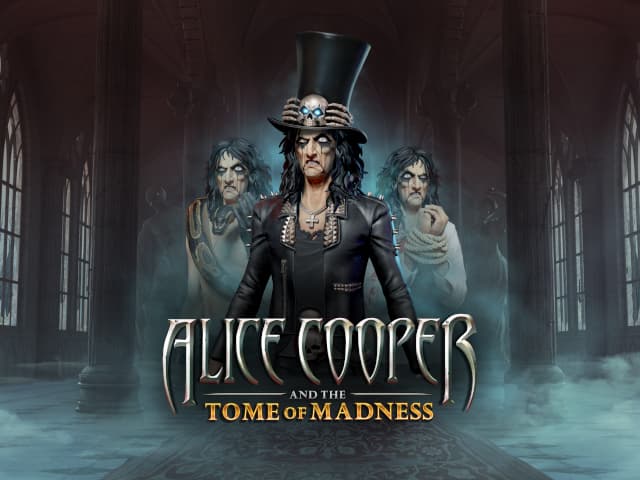 As one of the world’s greatest living rockers, Alice Cooper deserves recognition. He brought shock rock on the heavy metal scene and left a deep mark in an industry that he singlehandedly changed. Play'n GO has decided to celebrate his feats with a new release in the long-running music series called Alice Cooper: Tome of Madness.

The pokie has a pretty great story behind it. Cooper himself opened a book during a tour in which all pages were blank. With a unique antique item, Alice Cooper gets the chance to write a tale, choosing to write a horror story in parallel universes where he must fight to save his life.

All the action takes place on a Cluster Pays grid, with special Multipliers and Wilds set to make an appearance as well.

Play’n GO has not released plenty of information on the upcoming Alice Cooper: Tome of Madness pokie, but there have been a few tidbits of info that give a clearer picture. It’ll be a Cluster Pays pokie played on a 6x5 grid with cascading reels springing into action after each win.

The Alice Cooper: Tome of Madness pokie has some pretty nice features. For example, on every non-winning spin, one of four reality effects can be triggered. Some of these can transform symbols, others can remove them from the grid. If you collect 3 keys on the grid, you’ll unlock the Alice Copper mega Wild that acts just like it sounds.

Every winning spin will charge the Hat of Madness on the left. Collect 5 symbols in it to unleash Wilds on the reels. The more symbols charge the metre, the more features will be unlocked. Get over 25 symbols, and you can expect Reality Spins and Multipliers.

The main attraction of the Alice Cooper: Tome of Madness pokie bonus features will be the so-called Reality Spins. You’ll be able to choose from 4 different sets of spins, with the Reality Effects also in play.

All other features will be live during the Bonus Round, so it’s safe to say that the bonus is pretty lucrative.

Get the biggest No Deposit Bonus bonus and play Alice Cooper: Tome of Madness pokie now!

Play’n GO has set the RTP of the Alice Cooper: Tome of Madness pokie to a common 96.20%. The pokie's volatility has not yet been revealed, but we expect it to be high. There’s currently no information on the maximum possible win.

Play’n GO is known as a creator of entertaining pokies, and Alice Cooper: Tome of Madness is nothing if not entertaining. While the veil on the gameplay features has not yet been lifted, it’s clear that the pokie will be brimming with special features that can deliver solid rewards.

With Alice Cooper’s character embedded in the reels, you can rest assured that it’ll be a fun and wild ride at our recommended online casinos.

When will the Alice Cooper: Tome of Madness Pokie be Released?