The pokie industry has embraced apes in many shapes and sizes. Why? Well, they’re pretty close to humans – you probably know at least something about the Darwinian theory. Plus, they’re the ... Read Full Review 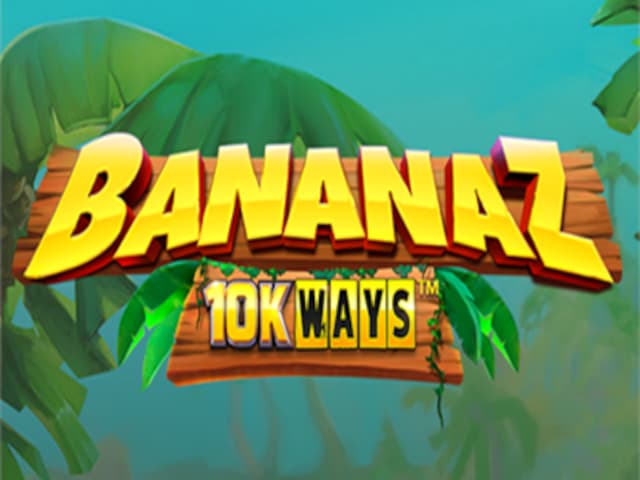 The pokie industry has embraced apes in many shapes and sizes. Why? Well, they’re pretty close to humans – you probably know at least something about the Darwinian theory. Plus, they’re the wackiest animals in the jungle, often doing crazy things that also look like plenty of fun. In slang terms, monkeys can go bananas on the pokie reels, just like Mike the Monkey does in ReelPlay and Yggdrasil’s Bananaz 10K Ways.

This cutesy pokie is set in a jungle (obviously) and stars a bonkers monkey called Mike who goes crazy for bananas. He’s not sitting on the tree to the left just for show. From time to time he can jump on the reels and award modifiers or features that will boost your wins.

In terms of stats, Bananaz 10K Ways has 10,000 betways which is obvious from the name. It’s a highly volatile title with an RTP of 96.12% that can shoot higher if you use the Buy Bonus feature. Available for free and real money in any Yggdrasil pokies online casino, this is a monkey pokie bonanza you don’t want to miss.

Bananaz 10K Ways is a 3D pokie that looks as great as a video game. This is understandable considering the developer and the publishing studio, both masters in their trade. The jungle’s so real you can touch it and it sounds great too. In the audio-visual department, the game earns the highest honours.

In setup terms, it’s a 6x4 layout with a horizontal sliding reel on top. And no, this doesn’t make it a Megaways pokie. It borrows features from the popular engine but isn’t a Megaways pokie itself.

The symbols are quite easy to guess even without looking for the pokie. Mike the Monkey is the Wild, while the bunch of bananas plays the Scatter role. All the premiums are Mike’s jungle buddies including an elephant, toucan, snake, and a few fruits and plants. The elephant on the reels pays the most – 60x for six on a line.

All the controls are in their usual spots, so you won’t have trouble playing it on any device at the best Android casinos and iPhone pokie sites.

You can play the Bananaz 10K Ways pokie on both Android and iOS devices. No need to download anything. It was built on the HTML5 platform so you can play it from your favourite mobile browser.

Place a bet between $0.20 and $25 per spin to start the game. The base game plays similar to Megaways real money pokies, so expect cascading reels and symbols from the top reel springing into action. Cascading Wins is the highlight in the base game and will keep going until there are winning symbols appearing.

Now the real surprise is a feature called Mike Goes Bananza, which literally describes it. This feature occurs on non-winning spins. The monkey will go behind the grid and transform up to 3 symbols into Wilds with a random Multiplier attached (x1-x5). These wilds appear on all reels except the first one.

We have to say that it’s fun to see the monkey do his monkey business, and it can be a very rewarding feature as well. That’s the only feature in the base game along with the cascades, with better action to follow in the Free Spins Round.

Land four or more bunches of bananas to trigger the Bonus Respins feature. At that point, the triggering Scatters will turn into Sticky Cash Symbols on a clear grid. They also carry a random value up to 1,000x in this Hold & Win-like Bonus round that starts with 3 respins.

As per the usual Hold & Win gameplay, only blanks, Monkey Mike, and Banana Cash Symbols can land. All non-blanks reset the respins to a count of 3. If you score a big win, you can gamble it by clicking on the dice in the top left corner. The max win from the Gamble feature is a whopping 400,000 coins payout and it features a Multiplier trail that can go as high as x5.

If you don’t want to wait for the Respins trigger, you can buy your way into the Bonus Round. This takes the RTP up to 96.99% and costs 100x the bet.

Bananaz 10K Ways is a fun pokie game that lets a funny monkey go bananas on the reels. It’s more than just a fun pokie to play at the best online pokie sites. Underneath the surface is a Megaways-inspired gameplay engine that can deliver big wins in the base game and the Bonus Round.

The real surprise is the Hold & Win Respins feature that can land you the biggest wins. In true gambling fashion, you can gamble them for bigger wins, but keep in mind you can lose it all.

The Bananaz 10K Ways pokie was developed by Reel Play for Yggdrasil’s platform. The studio has released many pokies so far with the same partner including Hypernova Megaways.

The RTP of the Bananaz 10K Ways pokie is 96.12%, perfect for a highly volatile pokie.

What’s the minimum bet I can place on the Bananaz 10K Ways online pokie?

You can place a minimum bet of $0.20. That’s low enough for even new players to try the pokie for real money.

No, the Bananaz 10K Ways pokie isn’t listed as a Megaways release. It has plenty of similarities with the engine sans the variable reels mechanic.

How many paylines does the Bananaz 10K Ways pokie have?

The pokie has 10,000 fixed paylines. These don’t change depending on the number of symbols like in Megaways pokie games.

What does Monkey Mike do in the Bananaz 10K Ways pokie?

Monkey Mike isn’t just a prop. From time to time, he can jump behind the reels and trigger the Mike Goes Bananaz feature that transforms symbols to Wilds for bigger wins.

Is there a jackpot to hit in the Bananaz 10K Ways pokie?

No, there’s no jackpot in the Bananaz 10K Ways. However, the top win is up to 240,000 coins, which is more than what some jackpots offer.

Is there a Free Spins Round in the Bananaz 10K Ways pokie?

There’s no Free Spins Round in the Bananaz 10K Ways online pokie – it has been replaced with a Respin feature with Hold & Win mechanics. The feature is quite rewarding too, though, and highlights the video pokie’s major winning potential.

Which pokies are similar to Bananaz 10K Ways?

If you’re looking for pokies with similar gameplay, we can recommend Reel Play’s Hypernova 10K Ways.

When was the Bananaz 10K Ways pokie released?