Just when we all thought that Asian-themed pokies would slowly become a thing of the past, Play’n GO is here to deny the rumor. The popular pokie studio has just released a ... Read Full Review 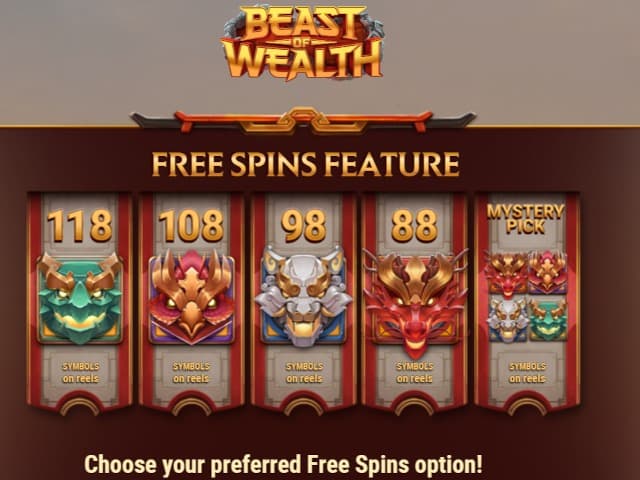 Just when we all thought that Asian-themed pokies would slowly become a thing of the past, Play’n GO is here to deny the rumor. The popular pokie studio has just released a trifecta of Asian-themed pokies, this time with the promise of vast ancient fortunes. The Beast of Wealth is the latest in the line of pokies with an Asian prosperity and wealth theme and similar features.

Compared to the two other entries in the trilogy, the Beast of Wealth online pokie looks much more traditional. With Chinese beasts displayed on the reels as well as mystery picks and four progressive jackpots, Beast of Wealth is a true beast of a pokie.

If you love Asian-themed pokie machines and massive rewards, Beast of Wealth by Play’n GO is an excellent choice at your favourite online pokie site.

As mentioned, the Beast of Wealth pokie machine doesn’t differ from its brethren by much. It has a more traditional look and feel than the other too, featuring what looks like a Buddhist temple in the background in a serene setting. The music is on par with the graphics too, elevating the tranquil experience.

In terms of setup, nothing looks out of the ordinary. The bet size range is below the reels with the green Spin button hard to miss on the right. If you want to learn how to play the game, the guide is available to the left.

Beast of Wealth is your typical Asian-themed pokie which doesn’t diminish its greatness. This pokie’s all about the prizes and the four massive jackpots attached to it, making it a dream to play for those of us who enjoy real-money pokie.

Play’n GO is a mobile-first developer. This means that all of its games are optimized for the Androidand iOS platforms with touch-screen controls and other features.

Developed on HTML5, the Beast of Wealth online pokie is perfectly playable on the go. You can spin the reels with a flick of the finger and if you’re lucky, you can hit one of the jackpots on your smartphone or tablet.

How to Play the Beast of Wealth Pokie

Playing the Beast of Wealth slot machine is not complicated at all. To start, you’ll need to set your bet. The slot is suitable for newcomers and high rollers, giving you a broad range of bet sizes from 0.10 to 100 coins per spin.

When you’re ready to start, spin the reels by clicking on the green button. The reels will turn and hopefully you’ll land a potentially stunning winning combination. The stylized card royals are low-paying symbols. To hit the big wins, you’ll be hoping to land the beasts on winning paylines.

On any paid spin, one of the reels can turn gold. If you happen to land a wild on it, you will have a chance to land one of the jackpots. Higher bets mean bigger chances to hit such an opportunity, so make sure to max out your bets. To determine which jackpot you win, you will keep clicking on the coins until three matching symbols are revealed.

The Beast of Wealth comes with only one bonus round – free spins. However, that bonus round comes with five different features. To trigger it, you’ll need three ying-yang scatters. You can then pick one of five options – eight free spins with 88, 98, 108, and 118 beast symbols on the reels.

After you choose your option, a random beast symbol will be assigned to the reels. There are four in total available during the bonus round – Dragon, Phoenix, Tortoise, or Tiger. The fifth option is letting the game decide for you at random.

During the free spins round, all premium symbols except for the chosen symbol are removed from the reels. You have eight free spins initially – that number can be expanded if you manage to land three more scatters. If you’re lucky, you will hit the maximum non-jackpot reward worth 5,000 times your stake in this round, making the Beast of Wealth beastly lucrative.

The Beast of Wealth pokie machine comes with an RTP that’s slightly lower than its brethren – 96.17%. No need to be scared of it – it’s a great RTP for a pokie of high variance and a maximum winning potential worth 5,000 times your bet.

Add the four progressive jackpots to the mix, and you have quite a solid online pokie with excellent rewards on offer.

While the three Play’n GO Wealth Package pokies are identical, we might like this one the best. The Beast of Wealth pokie is a truly beastly pokie machine with familiar gameplay and excellent audiovisual design.

If you’re into Asian-themed pokies with good fortunes and massive treasure chests in its focus, Play’n GO’s Beast of Wealth is a perfect choice for real money gameplay. If you want a completely different feel, then Willy’s Hot Chillies from NetEnt has huge jackpot potential and some interesting graphics to boot.