Crystal Queen is one of true blockbuster pokies by Quickspin, it dates back from 2015 but is an excellent game that is played on a 5x3 board that can grow to 5x6, ... Read Full Review 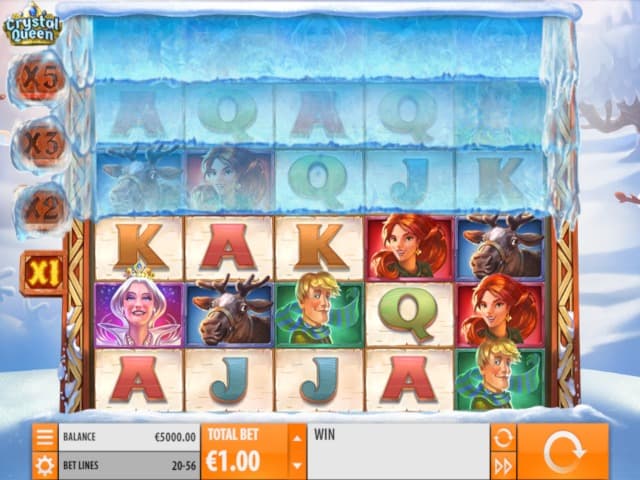 Crystal Queen is one of true blockbuster pokies by Quickspin, it dates back from 2015 but is an excellent game that is played on a 5x3 board that can grow to 5x6, with each new row giving an increased multiplier, up to x5! The theme is a mix between the tale of Snow White and the animated movie Frozen.

The game initially has 20 paylines on a 5x3 board, and a good thing is that you don't have to pay 0.20 to spin the reels but the minimum bet per spin is only 0.10, or 0.005 per payline. This gets even better as you unlock the fourth, fifth and sixth row as the number of paylines can go up to 56 and you will have paid a very small amount per payline. Simply choose your bet from 0.10 to 100.00, there are 15 levels so everyone will find a level that suits him/her. You may also click the ladder icon to read the game rules.

Quickspin often use the re-spins game mechanics in their pokies, and this is present in this game as well, and the game plays out differently than any other Quickspin game. Your board will initially be 5x3 symbols large, with the upper three rows frozen. You unfreeze them one by one by landing a win. Whenever you land a win, the winning symbols will explode, and the vacant spaces will be filled by symbols falling from above. That means that in each re-spin you'll have a whole new set of symbols, which makes it a bit more difficult to land consecutive wins.

When you land three Bonus Scatter symbols anywhere on your board, you'll enjoy a free spins game in which you'll have the entire board unlocked, and not only that, but the 56 paylines will pay both ways! There are no win multipliers here but this is a fun bonus round that will definitely produce some nice wins.

The theme of the game is excellent and the game doesn't look old at all, it might as well be a modern release. There's a Reindeer, a Prince and a Princess, and a Queen. It's up to each player to imagine roles for these characters, as Quickspin say this game is themed around the Snow White fairytale but the characters really look a lot like ones from Frozen, that was released two years before this game.

The four main symbols pay decent prizes for a re-spins game with multipliers, and the Queen is the best symbol of all, she'll pay 5x your bet for five-of-a-kind. The other three symbols pay 4x, 3x and 2.40x respectively. The five card symbols aren't too bad either, as they can already give you your stake back on a single payline if you land five of them.

The game is very well set up, and it's loads of fun to play. The game seems to be paying very well, much better than what the theoretical payout of 96.16% – a low value for Quickspin – would indicate. This is one of those pokies that are just enjoyable to play as they pay well and the extra features get triggered often. You got Spreading Wilds, Multipliers, Free Spins, the board that opens up to 5x6, and all that for 0.10 per spin.

Crystal Queen is one of the best Quickspin pokies, so whenever you play in one of our recommended Quickspin casinos you should play Crystal Queen. Play for real money as this is a quality pokie game and there's no need to be cautious about it. This game is just fun, and can throw decent wins at you from many different directions. Fun is doubled if you're a fan of Frozen.