Dinosaurs may be extinct for eons, but their legend lives on in various media. The gigantic creatures are the central part of Push Gaming’s pokie called Dinopolis. It’s a silly homage to ... Read Full Review 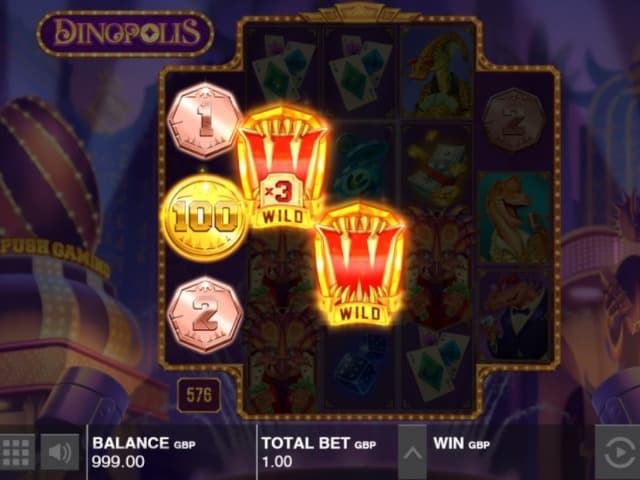 Dinosaurs may be extinct for eons, but their legend lives on in various media. The gigantic creatures are the central part of Push Gaming’s pokie called Dinopolis. It’s a silly homage to all the 90’s dino TV shows, featuring some of the most popular sitcoms characters in a new unique setting.

A 3-4-4-4-3 pokie game with several great features, Dinopolis does the 90s dino sitcom craze justice. It’s quite a high-paying game too, with cash prizes topping tens of thousands of times your bet. The action takes place across 576 paylines, so you’ll have plenty of chances to hit big wins.

All of it comes in a fun and crisp visual package paired with an entertaining soundtrack. The Dinopolis pokie has a chance to become Push Gaming’s next major hit. If you loved the cartoon TV show, you’ll enjoy playing this for real money too.

The first thing you’ll notice about the Dinopolis pokie game is the unusual 3-4-4-4-3 grid. Push Gaming has done a great job with the visuals. The symbols are all nicely designed and quite detailed, with sharp graphics all around. The barn dance music adds a nice touch to the action and picks up at the right time just as you’re about to score big.

In terms of symbols, you know what to expect. The reels are populated by dinosaurs in different shapes and sizes. All of them are properly divided into super high value, high value, and low value symbols. There’s a wild and a scatter too, as well as special dino coins.

Wins are awarded for a combination of three or more matching symbols on adjacent reels. As mentioned earlier, you can win in 576 different ways.

Push Gaming develops all of its pokies on the HTML5 platform. This means that the Dinopolis pokie is available across a range of devices at recommended mobile casinos, mainly Android and iOS smartphones.

How to Play the Dinopolis Online Pokie

Playing the Dinopolis pokie is not very hard. You will need to set your bet first – the options go from 0.10 to 100.00. Lining up the super high value symbols obviously pays the most – 10x for five of a kind. In contrast, the top high value symbol pays 4x for the same combo.

The wild plays its usual role, substituting for other symbols in winning combinations (except the scatter). What’s different about these wilds is that they can land with a multiplier of 2x or 3x, doubling or tripling your wins. Every time the wild lands on the reels, it also adds more ways to win on that particular reel.

While the base game doesn’t have many features except the wild multipliers, it also makes good use of the dino coins. These land on reels 1 and 5. Their value is awarded when they form a win with 3 matching symbols along with wilds on reels 2, 3, and 4. You will either earn the Dino Coin symbol award alone or multiplied by the value on the multiplier wilds.

Three scatters on the reels will trigger the Dino Bonus feature when they land on reels 2, 3, and 4. Before the feature begins, you have a chance to pick one out of 2 cards. The first pick awards the player with one of the feature picks prizes. There are four of those - Sticky stack wilds, Single reel multiplier boost, All reel multiplier boost and Golden card – two extra feature picks. When it comes to the second card, it shows the number of free spins.

During the bonus round, Dino Coin Collector symbols take the place of regular dino coins. These are collected in a special meter – as it fills, you progress to the next levels. A new level is achieved when the player land 5 collector coins. With each new level, you get 2 new picks.

In the Dino bonus round, players can also benefit from sticky stacked wilds. These cover a full reel and often come with a multiplier. If you land more than one, their value will be combined.

The RTP of the Dinopolis pokie by Push Gaming is set at a pretty solid 96.4%. It’s a pokie game of high volatility with a maximum winning potential of a whopping 50,000x your bet.

Dinopolis is a fun and cartoonish pokie with plenty of excellent and rewarding features. It’s a great homage to the 1990s dino tv craze that does the era justice. We were impressed by the fantastic features and the excellent rewards that can spice up your payouts and give you a chance to win truly big rewards at the best online casinos.

What’s the RTP of the Dinopolis online pokie?

The RTP is set at 96.4%, which is over the industry average. It’s perfectly common for a high-variance pokie game with such features.

What’s the lowest bet in the Dinopolis pokie game?

The lowest bet you can place in the Dinopolis pokie is $0.10. Ten cents are a pretty low bet for most players, even if you’re a newbie in the world of pokies.

What’s the maximum win in the Dinopolis pokie?

Dinopolis excels with great and high-paying features that can deliver up to 50,000x your stake. This can be achieved in the bonus round with combined multipliers and dino collector coins.

Dinopolis was developed by Push Gaming, one of the rising stars on the market. Some of the biggest Push Gaming hits you may know are Jammin Jars, Razor Shark, and Wheel of Wonders.

How many paylines are there in the Dinopolis online pokie?

The Dinopolis pokie has a total of 576 active paylines. Wins are formed for three or more symbols on adjacent reels, starting with the leftmost one.

Does it come with a free spins round?

Yes, the pokie has a pretty great free spins round. It is triggered by 3 scatters can called Dino Bonus. Before it begins, you get to pick a special feature that will remain active for the duration of the round.

How are the symbols divided in the Dinopolis pokie?

What pokies are similar to Dinopolis?

Dino-themed pokies are not uncommon in 2021. If you’re looking for similar pokies, we can recommend Dinosaur Rage by Quickspin, Raging Rex by Play’n GO, or Booming’s Spinosaurus.

Can I win real money on the Dinopolis pokie?

Yes, if you bet real money, you can win real money in return. The pokie is playable in a demo and paid mode. Make sure to check it out for free before you splash the cash.

Why is the Dinopolis pokie so popular?

Dinopolis is a great homage to the 1990s dino TV show craze. It offers a pack of special features with sky-high rewards that up the stakes and delivers massive wins.