There have been many epic gunfights in the history of the Wild West, but none tops the Four Dead in Five Seconds shootout. It cemented the legacy of Dallas Stoudenmire, one of ... Read Full Review 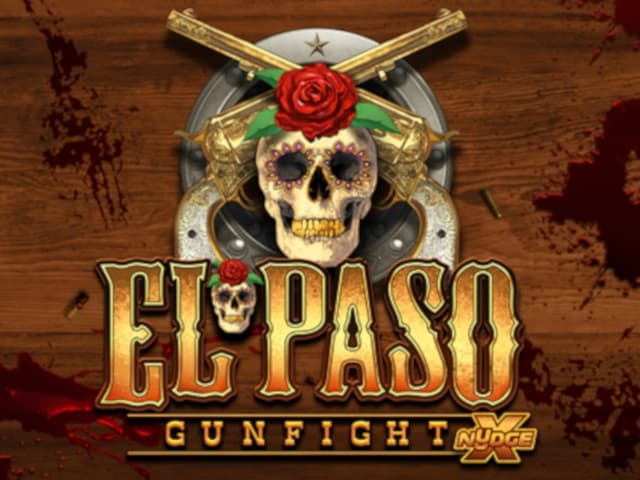 There have been many epic gunfights in the history of the Wild West, but none tops the Four Dead in Five Seconds shootout. It cemented the legacy of Dallas Stoudenmire, one of the best gunslingers in history and remains the wildest gunfight in history that occurred in a span of only 5 seconds. The legendary showdown is the basis for Nolimit City’s latest real money pokie game called El Paso Gunfight.

The El Paso Gunfight pokie features Stoudenmire himself, a few other gunslingers, and plenty of special bullets that can trigger great features. It’s a pokie with 216 paylines that can expand to over 43,000. Like many Nolimit City pokies before it, it looks and feels fantastic, while offering potentially fantastic wins.

A highly volatile pokie game with a fun theme and gameplay features, it’s a Smith & Wesson of a pokie. If you’re looking to try your gunslinging accuracy and hopefully reel in some bounty, El Paso Gunfight is the pokie for you.

The El Paso Gunfight online pokie is your typical Nolimit City piece. It looks great from a graphics point of view with vivid visuals and attention to detail. The layout is a bit unorthodox, but once you get the hang of it, you should feel right at home.

The action takes place in a saloon with the reels set against a cupboard with glasses. All of the symbols are put in an ornamented wooden frame with some positions locked. The symbols feature various gunslingers including Stoudenmire, the famous bystander, Johnny Hale, a Deputy badge, and a Marshall badge. If you land both on the same spin, they open up a big area on the reels.

There’s a scatter as well which represents a skull with a rose. Stoudenmire is the wild, while Campbell pays the most out of all gunslingers – 6x your bet for five of a kind.

The El Paso Gunfight pokie works perfectly across a range of mobile devices, with no download required to get involved in the action at top mobile casinos. You can give it a spin on your Android or iOS smartphone and try to down the gunslingers and win the bounty yourself.

How to Play the El Paso Gunfight Pokie

The bets per spin in the El Paso Gunfight pokie go between $0.25 and $50 per spin. One of the most unusual things about the pokie is that it gives you a chance to change the stance – just like a gunslinger. You can choose between high and extreme volatility. For example, the highly volatile setup comes with a 4-3-3-3-4 reel set, the Deputy badge on the first reel and the Marshall badge on the last.

If you choose the Extremely volatile setup, you get a 2-3-3-3-4 reel set with the Marshall and Deputy badge positions inverted. Whenever you trigger the Gunfight spins, you can choose the setup in all modes.

There are plenty of special features that you can trigger in the base game. The Stodenmire xNudge wilds can cover a reel (2, 3, or 4) and raise the multiplier by 1. Landing the Deputy badge converts low-value symbols to one low value symbol, including the Badge itself. The Marshall badge does the same, but works with high value symbols instead.

Landing all characters with a Stoudenmire wild and 4 high value symbols triggers a respin. This is called the 4 Dead in 5 Seconds feature, with the wild expanding on a reel and remaining locked for the respin. Its multiplier is active during the respin too, potentially leading to stunning wins.

Aside from these features in the main game, the really big Benjamins can be won in the free spins rounds.

There are a few free spins rounds you can trigger in the El Paso Gunfight pokie.

El Paso Gunfight base RTP is 96.06%. With the buy feature, it can go even higher, but that will cost you a pretty penny. The pokie has high or extreme volatility, so you should be careful with your bets. With all modifiers unlocked, the maximum you can win is 44,440 times your bet.

El Paso Gunfight is one hell of a shootout pokie. It establishes Nolimit City as one of the most fun developers on the market. With a plethora of great features and a bunch of special symbols, the pokie is hugely exciting to play.

Grab your revolver and help Stoudenmire make history. You could be landing a bag of coins in the process, so it may be worth your while. Why not check out one of our amazing casino welcome bonuses, which will provide you with some more ammo for this gunfight.

The El Paso Gunfight pokie was developed by Nolimit City. It’s one of the best up-and-coming studios on the market, offering exciting pokies with plenty of features just like in their gunslinging title.

Yes, it is. You can change your stance to either high or extreme volatility with a click of a button. Due to the high variance, it would be wise to play with a strategy and be careful with your bets.

What’s the RTP of the El Paso Gunfight pokie?

The base RTP of the pokie is 96.06%. This is in line with its variance and the RTP of similar pokies. You can increase it with the buy feature up to just below 97%.

How many free spins rounds are there in the El Paso Gunfight online pokie?

There are 3 free spins round, all with different modifiers and features. Each one of these rounds is triggered by a combination of 3 scatters plus one of the special symbols. Those can be the Marshall or Deputy badges or the Stoudenmire wild.

Can I play El Paso Gunfight for free?

Do I need to download El Paso Gunfight to spin the pokie on my phone?

No need to download the pokie on your phone to play it. You can just head to your favourite online casino and play it via your browser.

What’s the best casino where I can play the El Paso Gunfight pokie?

It depends on your preferences. The good news is that there are many good casinos out there using Nolimit City’s software. Try them all and find the one that offers best bonuses so you can spin the El Paso Gunfight pokie without breaking the bank.

Does the El Paso Gunfight pokie have a jackpot?

No, the pokie doesn’t have a jackpot. However, with all features triggered and an expanded reel set, it offers wins that can be as large as over 44,000x your stake, which is nearly as big as a jackpot.

The maximum real money win you can claim in the bonus round is 44,440 times your bet.

No, the El Paso Gunfight is not a Megaways pokie. However, its mechanics and special features make it just as rewarding, and the expanding reels and opening areas can lead to potentially mega wins.