Gem games have been around forever in the world of online pokies, and Play’n GO is a developer that has really gotten behind the theme over the years. Forge of Gems is ... Read Full Review 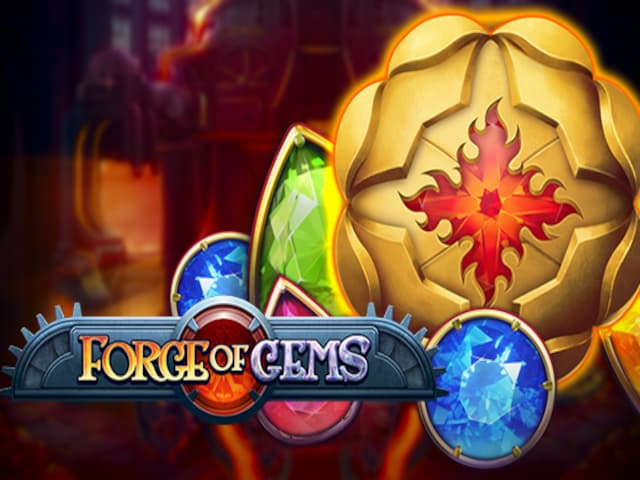 Gem games have been around forever in the world of online pokies, and Play’n GO is a developer that has really gotten behind the theme over the years. Forge of Gems is the fourth title to be released from the team as part of its Gems series. Other titles before it include Frozen Gems and Perfect Gems. While most pokies that use gems opt for either fairly generic gameplay or some sort of cluster pay mechanic, Forge of Gems attempts to put its own spin on the genre. In this Forge of Gems pokie review, we are going to break all of its gameplay mechanics and bonuses and let you know whether it’s worth taking for a spin.

When you develop a pokie based around gems, the symbols on the reels all but choose themselves. Players will find a selection of different coloured gems accompanied by the standard royal poker symbols here. Play’n GO has managed to create a good setting for the reels though.

The reels are sat in front of a roaring forge, the same one in which the gems themselves were made. It creates a surprisingly intense atmosphere and helps to give the pokie stand out in a genre full of bright colours and cheerful settings. This is all ramped up by the sounds of more gems being forged in the background.

How to Play Forge of Gems Online Pokie

The gameplay where Forge of Gems starts to stand out. The action unfolds over a standard 5x3 grid, but players will notice another row above the reels. The game calls this the Forge Reel and it comes into effect whenever players land a win, creating a cascading win effect. This also increases the number of ways to win in the game. On a standard spin, there are 243 ways to win, but once the cascades kick in, this can increase all the way up to 36,288.

Getting the game started is easy enough. Players can use the +/- at the bottom of the reels to adjust the stake. The minimum available wager is $0.10, and the maximum is $100, giving this a really healthy betting range.

Any pokie game with gems involved feels as though it has to be played on a mobile device at some point. Forge of Gems looks fantastic on the smaller screen and with most top new pokie sites now offering mobile play, it should be no issue finding one that suits your needs.

Play’n GO has loaded Forge of Gems up with a selection of both modifiers and bonus features. The pokie uses a Cascading Wins mechanic. Whenever players land a winning combination, the winning symbols disappear, and more symbols drop into place. When this happens, the Forge Reel symbols will drop onto the reels. The Forge Reel doesn’t contain normal symbols though, it contains blank spaces and modifier symbols. There are five different modifiers that can drop onto the reels.

A Gold and Blue one will turn all symbols into Wilds on the reel it drops onto, a Pink Gem with a blue outside will do the same for rows, a Blue gem with pink outside splits symbols into matching symbols, while one with two coloured gems split symbols and acts as a Wild. Finally, there is also a Gold Multiplier gem that increases the win multiplier on each cascade.

The main bonus feature in the pokie is the Gembox feature. In most top online pokie games, this would simply be referred to as the Free Spins Round. This is launched by landing three of the game’s Scatter Symbols. There are a few added twists though. During the round, there are no blanks on the Forge Reel and there are guaranteed Multipliers to drop on every cascade. The Multipliers will not reset for the duration of the spins.

The Forge of Gems pokie has an RTP of 96.20%. The maximum win that can be secured in this highly volatile game is 20,000x the overall stake. These are all solid underlying numbers and they are going to appeal to most online pokie players.

The Gems series has been a success for Play’n GO and that streak is likely to continue with Forge of Gems. The game sticks to the formula laid out in the previous titles and expands on it with some new bonus features. The theme itself is nothing groundbreaking but the gameplay is fun, and it the Forge Reel combined with the cascading mechanic and the Multipliers in the Bonus Round can lead to some good winning streaks when they get going.

Spin the reels of the Forge of Gems pokie at the best online pokie sites.

Who made the Forge of Gems online pokie game?

Forge of Gems was developed by Play’n GO. Play’n GO is one of the top developers in the industry and it works with a wide range of top online casinos. Whenever you see its name associated with a pokie, you can guarantee quality.

Is the Forge of Gems pokie game part of a series?

Yes! The Forge of Gems pokie is the fourth title to be released as part of the Gems series from Play’n GO. The series’ other titles include the Perfect Gems pokie, the Frozen Gems pokie, and the Prism of Gems pokie.

What is the RTP of Forge of Gems?

The theoretical return to player in Forge of Gems is 96.20%. This puts it above the industry average and is likely to grab the attention of pokie players. The game is considered highly volatile.

Is there a jackpot in Forge of Gems?

No. There is no jackpot in the Forge of Gems online pokie game. The maximum win that is available in the pokie game is 20,000x the overall stake. This is scored through a combination of the bonus features and multipliers.

Can I play the Forge of Gems pokie game for free?

Yes, you can! Find the demo version of the Forge of Gems pokie at the best online casinos!

What is the purpose of the Forge Reel in Forge of Gems?

The Forge Reel is an additional reel that moves horizontally at the top of the grid. This becomes active whenever players trigger a winning cascade in the pokie game. It will drop down a selection of modifiers onto the grid.

Where can I play the Forge of Gems pokie?

The Forge of Gems pokie will be available at a wide range of top online casinos. Play’n GO has a big presence in the iGaming world and its pokies can be found at many top operators. If you want to find a casino that suits your needs, then check out our detailed online casino reviews.

How many ways to win are there in Forge of Gems?

The Forge of Gems online pokie starts with 243 ways to win but this can increase all the way up to 36,288. This is because the game uses reel modifiers and a cascading wins mechanic to boost players winning capabilities.

When was Forge of Gems released?

The Forge of Gems online pokie game was released by Play’n GO on April 14th, 2022.

What is the highest and lowest amount I can wager in the Forge of Gems pokie game?

The minimum bet that players can place in the Forge of Gems pokie is $0.10, while the maximum amount is $100. Players can adjust their bet by using the +/- and the sliding scale at the bottom of the screen.