When NetEnt first released Gonzo’s Quest in 2013, it couldn’t dream that it will become such a hit. The popular and quirky adventurer became a budding 3D star, and the technical stats ... Read Full Review 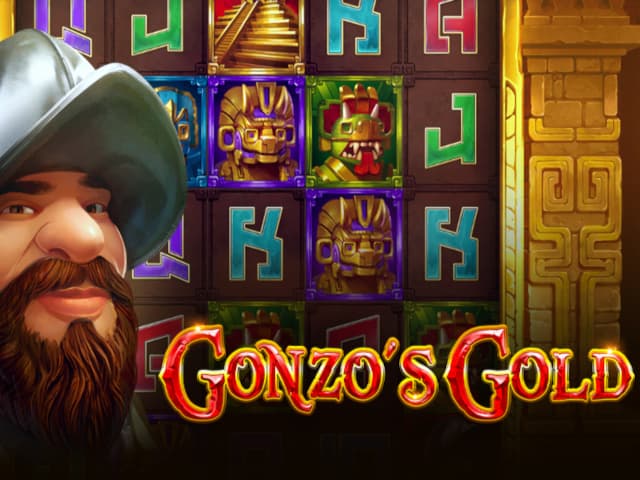 When NetEnt first released Gonzo’s Quest in 2013, it couldn’t dream that it will become such a hit. The popular and quirky adventurer became a budding 3D star, and the technical stats of the pokie were not bad as well. Thanks to the medium-high variance and the innovative Avalanche feature, the pokie paid pretty nice sums of real money. Years later, NetEnt added the Megaways mechanic to it, and soon after, it released a sequel called Gonzo’s Gold.

Gonzo’s Gold is a new adventure starring Spanish conquistador Gonzalo Pizzaro in the lead role. He’s still looking for the ancient lost city of Eldorado, and you’ll help him on this quest to find it. The pokie uses a Cluster Pays engine this time around that can lead to some pretty solid wins.

Available for free and real money in any NetEnt casino, Gonzo’s Gold looks like a new hit from NetEnt’s busy kitchen.

The Gonzo’s Gold pokie has a pretty simple and clean layout, and design new players will surely enjoy. It’s a bit of a mixed bag for vets, but we can’t say it doesn’t look gold. NetEnt took a minimalistic approach this time around, setting the 5x5 grid against an ancient temple. The reels are framed in golden ornaments, and the game’s logo sits atop.

In terms of symbols, you can expect Mayan imagery. The ziggurat plays the role of a Scatter, while Gonzo himself and a totem are the highest paying symbols. Get 25 of these in a cluster, and you’ll hit wins of 5,000x your stake.

Card royals are low-win symbols paying significantly less. The action is followed by an epic soundtrack and cool sound effects that will take you on a shoulder-to-shoulder adventure with Gonzo.

The pokie is developed on the HTML5 platform, making it available on a range of mobile devices. As long as you’ve got an iPad, iPhone, or an Android smartphone or tablet with an active Internet connection, you can play it on the go.

Choose a bet between $0.10 and $200 per spin and hit the Spin button to start searching for Eldorado. Because of the Cluster Pays engine, you’ll be aiming for the highest number of symbols in a cluster. Get 25, and you can expect some electrifying payouts.

Two or more adjacent Expanding symbols can cover entire reels or rows. The moment that happens, an additional cluster win is awarded for that particular cluster. Gonzo’s Gold also comes with a great Free Spins feature that can be accessed by landing three or more ziggurats.

When the round begins, you get to pick one mystery symbol to reveal. That one will play the role of Expanding symbols, covering reels and rows whenever it lands. The adjacent Expanding symbols feature is also in play, boosting the pokie’s winning potential in the Bonus Round.

The Gonzo’s Gold RTP is set at a decent 96.11%. That’s solid for a highly volatile pokie game. With a bit of luck, the maximum win you can hit in Gonzo’s Gold is 6,500x your bet.

Gonzo’s Gold is a continuation of the conquistador’s escapades and quite a good one at that. NetEnt has done a great job boosting the pokie’s potential over the previous titles. It looks and feels solid too, and is available for mobile devices.

Join Gonzo on this adventure at the best online casinos if you want to find the ancient hold in the long-lost city of Eldorado.

The Gonzo’s Gold pokie was developed and released by NetEnt. It’s another game in the successful Gonzo series that also includes Gonzo’s Quest and its Megaways version.

The RTP of this highly volatile pokie has been set to 96.11%. That’s right around the industry average for high variance pokies.

What’s the minimum bet I can place in the Gonzo’s Gold pokie?

Like in most NetEnt pokies, the minimum bet you can place in Gonzo’s Gold is $0.10. The maximum is $200 per spin, more than enough for high rollers.

No, it’s not. Gonzo’s Gold works on a Cluster Pays engine, which is entirely different from Megaways.

How does the Cluster Pays engine work?

As the name suggests, the Cluster Pays engine pays for clusters of symbols. You can land up to 25 of those – if you get the high-win symbols in a cluster, you can expect payouts worth thousands of times your stake.

What’s the highest symbol win I can hit in the Gonzo’s Gold pokie?

The highest payouts are for 25 symbols in the base game. Get Gonzo, for example, and the payout will be 5,000x your stake.

How do I get to the Free Spins round?

The Free Spins round is traditionally triggered by 3 or more Scatters. If you trigger the round with more Scatters (4 or 5), you also get an instant win worth 20x and 200x your bet.

Is Gonzo’s Gold available to play for free?

Yes, you can. The demo version of the Gonzo's Gold pokie is available for free playing.

Can I play the Gonzo’s Gold pokie on my phone?

The pokie is developed on the HTML5 engine that allows you to play it through mobile browsers without the need to download software.

Should I download the Gonzo’s Gold pokie to play it on my iPhone?

No, there’s no need to download third-party software to spin the pokie on your Android or iPhone.