NetEnt has released dozens of pokie hits over the years, but nothing tops the popularity of Gonzo’s Quest. One of the studio’s top performers was released in 2013 and is still flying ... Read Full Review 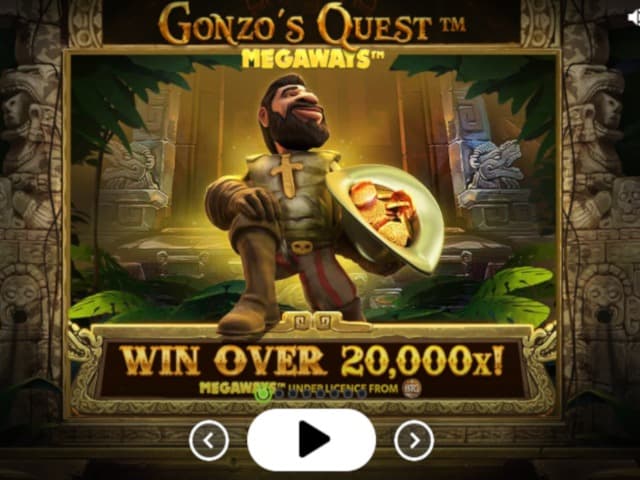 NetEnt has released dozens of pokie hits over the years, but nothing tops the popularity of Gonzo’s Quest. One of the studio’s top performers was released in 2013 and is still flying high. It puts you in the shoes of an adventurer out to unearth a chest of gold. It was one of the first pokies to introduce the cascading wins mechanic and was a pretty high-paying game back when it released.

After years without a sequel, NetEnt has collaborated with Red Tiger Gaming to give its massive hit an overhaul. Red Tiger is one of the hottest developers right now and rightfully chosen to revamp the pokie machine. The result of the collaboration is the Gonzo’s Quest Megaways online pokie, a game that uses the Megaways mechanic to deliver real money pokies rewards worth up to 21,000 times your stake.

The revamped pokie machine keeps all of the fun and excitement of its predecessor, but ups the ante and makes things even more exciting. We feel that the new Red Tiger-NetEnt online pokie will be as big as a hit as the original Gonzo’s Quest.

Revamping a major pokie hit is not as easy as it sounds. After all, you’ll have to retain much of the original features to make it click with pokie fans. It must feel like you’re playing the original, but with new exciting elements that make it distinct. That wasn’t a problem for Red Tiger when it revamped the Gonzo’s Quest online pokie game from NetEnt.

The pokie retains much of the features from the original, but this time they’re bigger and better. Of course, the game looks much better than the 2013 pokie. The graphics are crisp and clear. The whole package feels like a premium pokie.

In terms of setup and controls, not much has changed. It looks like a modern pokie with 3D graphics and Gonzo to the left just like in the original pokie game. Simply set your real money bet size – minimum bet is 0.20 credits, maximum bet is 40 – and spin the cascading reels. The game will calculate the immediate Megaways return so you can see what you might win.

Mobile gaming is the preferred way to play in 2020 and Red Tiger Gaming knows it pretty well. The Gonzo’s Quest Megaways pokie is fully mobile-optimised and works perfectly across all types of devices.

No matter if you have an Android or iOS smartphone or tablet, the pokie works great thanks to touch-optimised controls and fluid gameplay. Check out Pokiesource.co.nz for a complete list of mobile-compatible games and read about our no deposit bonuses as well.

The Gonzo’s Quest Megaways pokie machine relies on cascading reels to deliver big wins. Every time you hit the Spin button, the Megaways engine will calculate how many reels are in play. When you score a win, new symbols will replace the ones that lost, eventually creating new win combinations.

There are a total of 117,649 Megaways active with the maximum reward worth 21,000 times your real money stake. The game is played across 6 reels, which feature Aztec deities and symbols. It’s an adventure-themed pokie with a distinct look and feel retained from the original.

The avalanche mechanic raises the multiplier up to 5x for consecutive wins and 15x on 4 or more avalanches in the base game. Thanks to this unique feature, you don’t need to wait for the bonus round to score a big win in Gonzo’s Quest Megaways.

Whilst the avalanche wins and Megaways engine are the pokie’s highlights, it still has a free spins round and special features such as unbreakable wilds that can lead you to the maximum prize. There’s a total of 6 special features starting with the avalanche and multipliers. A random Earthquake feature can replace low-paying symbols with high-paying ones which can lead to great wins.

The unbreakable wilds remain in play after a win. A maximum of two of these reels can land during a base spin. The free spins round is triggered by 3 bonus symbols or 2 bonus symbols and a wild. Three bonus symbols will give you 9 Free Fall spins with avalanche multipliers increased to 3x, 6x, 9x and 16x for the duration of the round.

Players at the best pokie sites can win additional free spins during the bonus game in the same way as in the base game. That raises the winning potential of the Gonzo’s Quest Megaways video pokie even further.

The Gonzo’s Quest Megaways online pokie game doesn’t feature a jackpot. However, its maximum winning potential of 21,000 times your real money stake sure makes it look like one.

Don’t be scared by the lowly RTP of 94.66%. The Megaways engine is pretty generous if you’re lucky and will raise the RTP when you’re in a position to win big. As a medium-high variance pokie, that might not come often, but you can score nice wins occasionally.

NetEnt and Red Tiger have teamed up to revamp a classic and they did a great job. The Gonzo’s Quest Megaways online pokie is a marvellous game with amazing winning potential and the sequel we deserve.

If you want to try alternative adventure-themed pokies, we can recommend the original Gonzo’s Quest online pokie, or Microgaming’s Jungle Jim El Dorado online pokie. See Pokiesource.co.nz for hundreds of online pokie reviews and information on the best pokies bonuses too.

When was Gonzo’s Quest Megaways released?

Gonzo’s Quest Megaways was released in 2020 – so it is one of the newest games on the market!

What is the minimum bet and maximum bet on Gonzo’s Quest Megaways?

How much can I win playing Gonzo’s Quest Megaways?

Take a spin on the Gonzo’s Quest Megaways slot and you could top up your bankroll with up to 21,000x your stake in earnings!

Where can I play a demo version of Gonzo’s Quest Megaways?

You can play the demo version of Gonzo’s Quest Megaways, without having to risk any real money, right here! Check it out and also see our slot expert’s thoughts on this new release.

What is the RTP on Gonzo’s Quest Megaways?

The return to player percentage on Gonzo’s Quest Megaways is 94.66%.

Gonzo’s Quest Megaways is a medium to high volatility game – meaning that wins can be quite spread out, thus requiring patience, but that fact is offset by the potential to make 21,000x your stake.

Where can I see a Gonzo’s Quest Megaways online slot review?

Right here on on PokieSource.co.nz! Our experts have given their independent thoughts on the game, going through the finest of detail to make sure this is the right slot for our audience.

Would you recommend Gonzo’s Quest Megaways as a good slot game?

Yes, Gonzo’s Quest Megaways is a fantastic slot game. The combination of Megaways software, increasing multipliers, and avalanche reels make this a game with the prospect of mega rewards. Features like a Free Falls bonus, Earthquake Feature, and Unbreakable Wilds provide you with an abundance of ways to win and more.

Can Gonzo’s Quest Megaways be played at the mobile casinos?

The game is available on all devices, so you can select to play on desktop, mobile, or tablet devices. You can launch the game on any mobile device including Android, Windows and iOS devices.