Hades - Gigablox is one of the best-looking pokies you’ll ever see. Yggdrasil has used a jaw-dropping design and 3D animations and combined them with a dramatic soundtrack to deliver the infernal ... Read Full Review 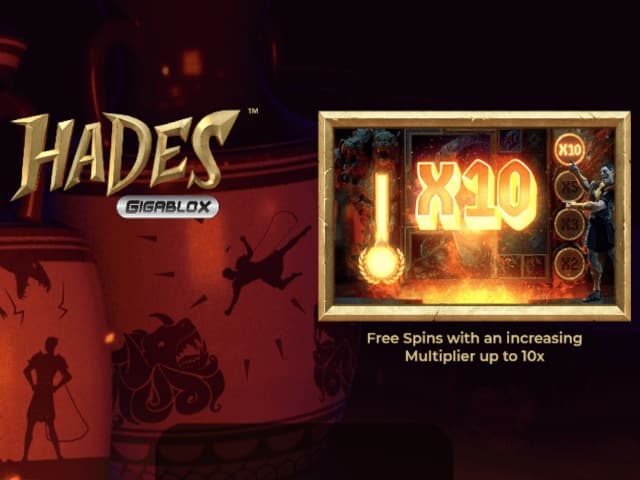 Hades - Gigablox is one of the best-looking pokies you’ll ever see. Yggdrasil has used a jaw-dropping design and 3D animations and combined them with a dramatic soundtrack to deliver the infernal atmosphere of the underworld. Inspired by the Greek mythology, the pokie tells you the story about Hades, presented with video game-like elements.

The pokie is the second to feature the Gigablox feature which allows mega-sized symbols to land on the reels. Paired with medium volatility, this feature can deliver quite big wins on each spin. Add to that the fact that other features are included, and the pokie can be played on any device, and you’ve got yourself the perfect pokie to try out. Learn how to get the best out of it!

If you want to try out Hades - Gigablox real money pokie, you should know that you can do it on any device you have around you. It is perfectly compatible with all mobile and desktop devices, for your convenience. When you load it, prepare yourself for cinematic magic. The intro will immerse you to the underworld.

On the right side of the reels, you can see Hades himself, getting ready for some hunting action. On the left side, you see the “i” button. Click or tap on it and you’ll enter the paytable. You first get the game rules, but then, you see the symbols. The four monsters are the high-paying ones, giving you anywhere from 4x to 8x the stake. The playing card suits are low-paying. The Wild is the symbol with another golden monster, while the Scatter is the Free Spins symbol.

Next to the “i” button, you’ll see the settings and the speaker button, where you can adjust the controls. Below them, you’ll find the lines display, the coin value configuration and the total bet display. The coin value goes from 0.002 to 2, making the max bet for the 50 lines go from 0.10 to 100 credits. Next are the Max Bet, Spin and Autospin buttons, followed by the Win and Balance displays.

The Hades - Gigablox players can enjoy this pokie at the high rated mobile casinos. It has been optimised for mobile play, so wherever you go, you can play it.

It plays smoothly on any smartphone or tablet powered by the operating systems Android and iOS. But, you can always play it on your desktop device, at home, if you want to. The game plays as smoothly on any device and offers the same features and controls.

If you’ve never played a Gigablox pokie, you should know that this is a feature that allows mega-sized symbols of up to 6x6 in size to appear on each spin, called blocks.

During the base game, Hades may decide at random to fight monster symbols on the reels. The Hades Wild Hunts starts when he does that.

Should he defeat a monster, that monster will turn into a Wild, no matter whether a single symbol or a block. The Wild substitutes for all regular symbols and can only be rewarded during this feature, Hades Wild Hunts.

You will get as many Free Spins as Scatters you landed, meaning if you triggered the Hades - Gigablox bonus round with 5 Scatters, you get 5 Free Spins. Each additional Scatter you land during the Free Spins gives you 1 extra Free Spin. The Hades Wild Hunt in the Free Spins happens on every spin.

During the Free Spins, whenever Hades successfully defeats a monster, 1+ point is added to the Multiplier counter. With each new Multiplier level, you get 2 Free Spins extra. Monster blocks are also calculated by symbols’ size, meaning you get 4 points for a 2x2 block, for instance. In total, for 10 successful Wild Hunts you get 2x, for 15 you get 3x and for 20 you get a 5x Multiplier. Manage to hunt 25 monsters and your Multiplier will be 10x!

We did mention that Hades - Gigablox can deliver big wins and bonuses on each spin. But, do you know how big wins? Well, up to 11,129x the stake! This incredibly designed pokie also offer massive payouts. Should you play it for the max 100 credits bet, you could win 1,112,900 credits.

Hades - Gigablox is truly a superb pokie. It ticks all the boxes to be labelled the perfect pokie, the best we've seen in a while. Just load it and you’ll see right away that that’s the truth. It looks stunning, it has a theme-suited soundtrack, it has engaging gameplay filled with massive blocks of symbols, and it is even gamified in the part where Hades fights the monsters. On top of all that, it comes with a huge payout potential, 11,129x the stake, meaning it can make you a millionaire in an instant.

While we usually recommend other pokies in case we believe you’d like them better, this pokie barely has any competition. It is medium volatile with a mind-blowing payout potential, and it looks absolutely amazing. If you still haven't tried it, try it out right away at one of our recommended top online casinos!