The alien invasion may actually be quite quirky and more vibrant than we could have ever imagined – at least it seems to be true in SG Digital’s Invaders Megaways pokie which ... Read Full Review 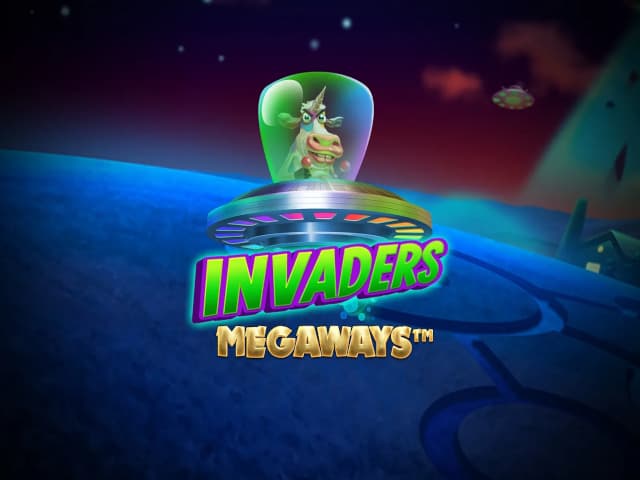 The alien invasion may actually be quite quirky and more vibrant than we could have ever imagined – at least it seems to be true in SG Digital’s Invaders Megaways pokie which is powered by Big Time Gaming’s Megaways engine. Players will be immersed immediately thanks to the futuristic soundtrack, which resembles something that we’d only ever hear whilst floating through time and space. As you travel across the neon-hazed 6-reel grid, the peculiarities will start revealing themselves in the form of paying symbols, such as regular visits from the googly-eyed creatures themselves, mad professors, flying cows, and spaceships.

We’re not sure if the game’s real jaw-dropper is the fact that there are 1 million paylines to enjoy the adventure of a lifetime and gain glorious cash prizes, or if it’s linked to the maximum win potential of 250,000 coins – we’ll let you decide by playing the pokie at the best online pokie sites.

The Invaders Megaways pokie is formed on a 6-reel layout, where the Megaways become more or less active, dependent upon the number of symbols appearing within the grid. For the winning combinations to be formed, players need to collect three or more same-symbol combinations to achieve a payout or to unlock bonus features.

The glossy graphics, cartoon-style characters where you can only wonder how many wins are lurking within the field that consists of curious-looking crop circles. The highest paying symbol of all is the Invaders Symbol, which offers 4x the stake when a combination of six has been landed. You may also notice that the Transforming Wilds will be making regular appearances on the grid throughout the game.

How to Play the Invaders Megaways Pokie

For the space invasion to begin, click on the pile of coins symbol, which will allow you to adjust your bet in the allowed currencies. The bet menu will be located on the right-hand side of the reels and appears as a medium round button with an ‘x’ in the middle and a (-) button and a (+) button on either side. The Autospin button is directly located below this button and appears as a purple button with two arrows. To begin the game, press the large green button which has one arrow, to start the game. The betting range starts from 0.25 to 10.00 in the respective currency.

The Invaders Megaways pokie can be enjoyed from a wide range of devices, meaning the adventure can begin from absolutely anywhere. The bigger the screen the better, so you can fully appreciate this wild ride with all its lively graphics.

You can play the pokie for free or real money across smartphone devices, laptops, desktops, and tablets. It has also been optimised to ensure that it is compatible with iOS, Android, and Windows.

Make way for the Megaways mechanic with an added twist appearing within the boosted bonus features.

The Cascading Reels Feature is a self-activating feature that comes to life when winning symbol combinations have been formed. All of the winning symbols are removed from the reels and are replaced by fresh and new symbols, allowing for a constant stream of wins.

The UFO Wild Selector Feature consists of an additional row of symbols, which linger above the standard reels, where a UFO glides across shining a rainbow-tinted light across the grid. The UFO will blast at one of the standard symbols on the reels for each spin, if landing on reels 2,3,4, or 5, they will transform that chosen symbol into a Wild for that same spin, allowing for a cascade of the reels.

The Unicow Feature means that when the Unicow flies across the grid at random, it increases the number of symbols that appear on the reels and the number of megaways.

The Free Spins Feature can be triggered by collecting a total of 4-6 Planet Scatter Symbols. Which is a common thing in pokies with free spins.

On every Free Spin, 1 of the 5 high-value symbols will be chosen at random and will transform into a  Wild during that particular Free Spin. This particular Wild also comes with a unique modifier added to it. The modifier that becomes activated depends on which chosen symbol is selected. This is how it works:

Invaders Logo. If the symbol is Wild, it will expand to fill the entire reel when it lands. This will transform into the multiple win ways that form a winning combination.

Scientist Symbol. In this case, the Multiplier will be doubled with every single cascade. The multiplier begins at 2x, however, it can increase to a maximum of 256x.

Space Cow Symbol. All of the cow symbols will be held as 2 Wild Symbols.
Ray Gun Symbol. Each time a Ray Gun Symbol lands, an additional Wild will be added to the reels. This will only be applicable for the main free spin, and will not apply to other cascades that take place.
There is also a possibility of retriggering the feature. Landin either three of four Scatters will award players with additional free spins and landing any more than four, will make way for a full retrigger.

The high volatile Invaders Megaways pokie boasts a Return to Player (RTP) of 96.30% and contains a maximum winning potential of 250,000 coins.

SG Digital have taken this alien-themed Megaways pokie creation to a whole new level. The storytelling elements add a huge amount of gloss, vibrancy, and engagement from beginning to end.

The additional bonus features are standard to a degree, especially where the Cascading reels feature is concerned, however, the Free Spins Feature has been boosted by the use of internal modifiers which adds a whole host of winning potential and acts as a gateway towards unlocking even more rewards when the features have been activated.

If you liked pokie themes surrounding space adventures and powered by BTG’s Megaways engine, then you may just love Rick and Morty Megaways by Blueprin Gaming.

Who created the Invaders Megaways pokie?

The Invaders Megaways online pokie was created by SG Digital, a premium pokie game software provider within the online casino industry. The pokie manufacturer is responsible for such hits as the Rainbow Riches pokie and the Wizard of Oz pokie.

What is the RTP in the Invaders Megaways online pokie?

The Invaders Megaways pokie is listed as a high-volatility pokie and contains a default Return-To-Player (RTP) of 96.30%.

What is the maximum payout in the Invaders Megaways pokie?

The hugest surprise of all is the maximum winning potential, which becomes a possibility of playing the Invaders Megaways pokie, which can reach as high as 250,000 coins.

What is the best online casino where I can play the Invaders Megaways pokie?

Invaders Megaways sits within the pokie libraries of all premium online casinos. We’d suggest you choose an online casino that resonates with you and enjoy this spaced-out pokie from there.

What online pokies are similar to Invaders Megaways?

If you enjoyed the Invaders Megaways pokie, then you may enjoy similar creations like the Visitors pokie by ELK Studio and the Reactoonz pokie by Play’n GO.

Is the Invaders Megaways a high volatility pokie?

Yes, the Invaders Megaways pokie is high-volatility so expect high risks and higher rewards in this one.

Should I always bet the maximum amount on the Invaders Megaways pokie?

To gain the biggest prize-winning potential when playing the Invaders Megaways pokie, we’d suggest you keep your bets within close range of the maximum, in order to gain the most from the game.

Yes, you can absolutely play with real money when engaging with the Invaders Megaways pokie at the most popular online casinos.

What’s the most I can bet in the Invaders Megaways pokie?

The betting range begins from 0.25 and can be increased to a maximum of 10.00 in any given currency when you play the Invaders Megaways pokie.

What kind of pokie symbols will I find in the Invaders Megaways pokie?

There are all sorts of quirky symbols to be found in the Invaders Megaways pokie, you’ll notice that the Invaders Logo, the Planet Wild, and the Scatter are the ones to watch, however, the Invaders logo is the highest-paying symbol to land during the game.