While it’s not as big as ancient Egyptian culture, Mesopotamia was a massive kingdom that holds a big cultural significance all around the world. One of its main goddesses was Ishtar. She ... Read Full Review 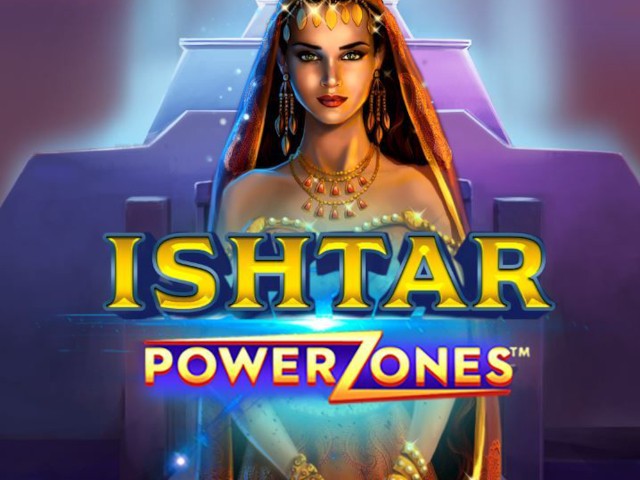 While it’s not as big as ancient Egyptian culture, Mesopotamia was a massive kingdom that holds a big cultural significance all around the world. One of its main goddesses was Ishtar. She was the goddess of power, sex, love, and justice and was worshipped by other cultures, such as the Akkadians after Mesopotamia. Ishtar is the core of Playtech’s latest pokie hit, simply called Ishtar: Power Zones.

It’s quite obvious that the Ishtar: Power Zones pokie features a specific mechanic. So far, there have been only a few pokies using it, all developed by Playtech’s studio Ash Gaming. This mechanic mostly relies on transforming symbols and several multipliers that can spice up the action on the reels. These are linked together on the reels both vertically and horizontally.

The Ishtar: Power Zones pokie is available in all Playtech casinos for free and real money. Spin its reels right now, and you can hit wins as high as 10,000x your bet.

As per the usual for pokies with special mechanics, Ishtar: Power Zones comes with 6 reels. In visual terms, Playtech has done a great job, but it always does. The Ishtar: Power Zones pokie comes with great graphics and audio, with crisp-clear symbols gracing the reels. While on the subject of the reels, they’re set against a background of a Mesopotamia desert with a temple dedicated to the great goddess to the left of the reels.

On the reels themselves, you’ll see highlighted positions with a glowing blue field. They play a major role in the Power Zones – we’ll talk more about that later. You can hear Oriental music in the background that fits the narrative and gives the pokie a distinct feeling.

Ishtar herself pays the most, delivering wins of 40 times your bet for 6 on a line. When it comes to lines, the Ishtar: Power Zones pokie gives players 15,625 ways to win.

Playtech’s pokie games are fully mobile-optimised, and this one is no exception. The Ishtar: Power Zones pokie can be played on Android and iOS devices without the need to download any app.

How to Play the Ishtar: Power Zones Pokie Game?

Check the bet size button under the reels and adjust your bets to what you feel most suitable. You can choose between $0.20 and $250, fitting enough for all types of players. All you need to do is hit the Spin button to start playing the Ishtar: Power Zones pokie.

During the base game, the wild can substitute for other symbols in winning combinations. However, it only appears during the random wilds feature.

Remember the highlighted reel positions we mentioned before? They’re called Power Zones. Whenever the torches light up blue, Ishtar will bless the reel with wilds in random positions that can spice up your wins. This is the first part of the Flames of Ishtar features that modify Power Zones to boost your wins.

Besides the Random Wilds, when the flames burn green, you trigger the Goddess Mode feature. With it, Ishtar multiplies all wins that feature Power Zones per the indicated value. With each transformation, the multiplier rises by +1. This mode can last for several spins, with a Fire Spin on the last one.

That’s the last Flames of Ishtar feature. It makes the torches burn red, transforming all Power Zones into a mystery symbol. The Fire Spin can also be randomly triggered on each spin and right after Goddess Mode.

As mentioned earlier, the pokie's action revolves around the Power Zones. The zones can hit any symbol except the wild. If you land the blue orbs on the reels, the Power Zones will lock on the reels and connect to each other both vertically and horizontally. If the orbs land in Power Zones, they will transform any symbol to the same symbol type.

There are no bonus rounds in the Ishtar: Power Zones pokie. However, the random features and the Flame of Ishtar modifiers are more than enough to deliver massive real money wins.

The RTP for the Ishtar: Power Zones pokie has been set to 95.62%, a bit lower than expected for a highly volatile pokie game. The maximum win across the 15,625 paylines is 10,000x your bet.

The Ishtar: Power Zones pokie is an entertaining game that tries to do things differently. The Power Zones are a relatively new mechanic that features a new take on special gameplay mechanics. While the pokie may not feature a free spins round, it comes with plenty of multipliers blessed by Ishtar that can result in big wins.

Play the Ishtar: Power Zones for real money at our recommended online pokie sites and give an offering to the goddess for great wins in return.

The Ishtar: Power Zones pokie was developed by Ash Gaming for Playtech. The latter is one of the industry’s leaders and creators of many hit pokies, including the Age of the Gods franchise.

The RTP for the Ishtar: Power Zones pokie game is set to 95.62%. That’s a bit lower for a high variance pokie, but it offsets that with plenty of special features.

The minimum bet you can place on the pokie is $0.20, low enough for even new players.

Does the game have a free spins round?

No, it doesn’t. The central piece of the action in the Ishtar: Power Zones pokie is the Power Zones themselves. The modifiers and special features are linked to these as well, so there’s no bonus round to trigger.

How are the Flame of Ishtar features triggered?

All three Flames of Ishtar features are triggered randomly in the Ishtar: Power Zones pokie. There are three of these linked to the flame burning in the torches. Blue is for Random Wilds, green is for Goddess Mode, red is for Fire Spin.

Can I play the Ishtar: Power Zones pokie on my phone?

Yes, you can. The Ishtar: Power Zones online pokie is mobile-optimised and available on Android and iOS mobile devices.

No need to download anything before playing the Ishtar: Power Zones pokie on your phone. Just find an instant-play Playtech casino and spin it via your browser.

Yes, you can play the Ishtar: Power Zones demo free of charge.

Can I play Ishtar: Power Zones and win real money?

If you choose to play the pokie game for cash, you can win real money in return. This will require a registered and funded casino account. Spin the reels carefully, though, as this is a high variance pokie which means there can be long spells without winning spins.

When was the Ishtar: Power Zones pokie released?

The Ishtar: Power Zones online pokie was released on May 3, 2021.