One of the best developers in the business, Yggdrasil Gaming, has been known for its explosive pokie and the Vikings series. However, the developer is never afraid to go in another direction. ... Read Full Review 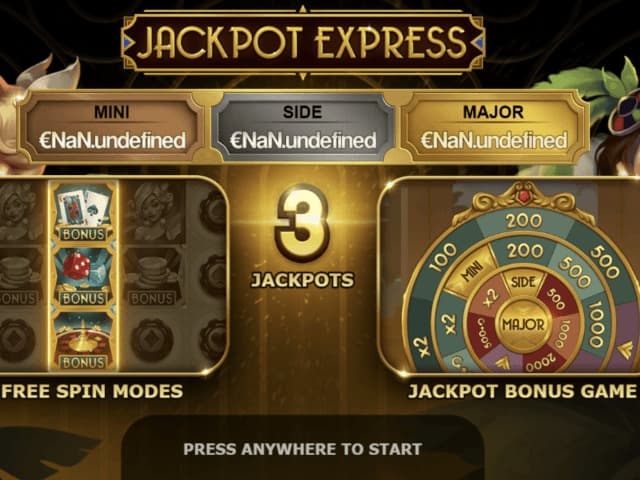 One of the best developers in the business, Yggdrasil Gaming, has been known for its explosive pokie and the Vikings series. However, the developer is never afraid to go in another direction. The beautiful Jackpot Express online pokie is major proof of it as the latest in Yggdrasil’s line-up of games that carry an unusual theme for the Maltese studio.

Jackpot Express is an homage to simpler times. It looks like it jumped straight out of a time machine, perfectly representing the riverboat casino scene that was so popular at the beginning of the 20th century.

The perfect looks are complemented by a cool jazzy soundtrack that fits the theme. Of course, the pokie isn’t all show. With an RTP of 96.2% and a real money pokies max win of 2,175 times your bet, this Yggdrasil online pokie pays more than one-armed bandits did back in the day.

The Jackpot Express online pokie is set in a riverboat casino. The reels are set against a background that depicts a river. All the pokies are nicely detailed, as one would expect in an Yggdrasil online pokie.

The Jackpot Express pokie machine had eight low- and high-paying symbols in total. The stylised card royals pay less, whilst the characters pay more. The captain leads the list with a prize worth 12.5 times your stake for five on a line.

This game has 20 fixed lines. It looks and feels great, and is even better when you use one of the best pokies bonuses available through Pokiesource.co.nz. Just like all Yggdrasil pokies, this game’s visuals are on-point, but this time, they’re accompanied by a great jazzy tune heavy on the piano. The tempo picks up when you start spinning and it relaxes when there’s less action.

Just like all Yggdrasil releases – and selections from many other online pokies game providers providers – Jackpot Express is fully mobile optimised. You can play the pokie game on your phone with ease. The controls are touch-optimised and the game fits any screen size. It doesn’t matter if you’re an Android or iOS fan – Jackpot Express works equally great on both.

How to Play the Jackpot Express Video Pokie

Yggdrasil Gaming has been known for games with intuitive interfaces and the Jackpot Express pokie machine is no different. Right beneath the reels, you have the coin value and total bet. You can stretch the bet size between 0.20 coins and 100. If you want to max out your bet in one instance, click the Max Bet button next to the Spin and start playing.

The base game is pretty simple and devoid of any special features. You’ll be hoping to land some of the high-paying symbols which include the captain and croupier. These symbols pay over 10 times your bet for five of a kind. Whilst other pokies may pay more in the base game, it’s a pretty solid return, especially for those who like to max their bets out.

The base game doesn’t have many features, but the free spins round is the exact opposite, so players at the best pokie sites should get plenty out of it.

The real surprises in the Jackpot Express pokie by Yggdrasil Gaming come in the free spins round. Land three bonus symbols (pile of gold) to get 10 free spins boosted by multipliers, sticky wilds, or a combination of both.

There are three free spins features in total:

Apart from the free spins round, the pokie game also features three jackpots. The feature’s right there in the name, so not very surprising. This feature is triggered by three bonus symbols too. When active, a multi-level prize wheel will be spun to give you coin prizes or one of three jackpots.

The Jackpot Express pokie comes with an RTP of 96.2% and medium variance. Varied wins are to be expected with the occasional big win in the bonus round. Of course, the mightiest feature of this pokie are the jackpots. But, even if you don’t win them, the maximum winning potential of 2,175 times your stake – for a maximum win of 217,500 credits – is more than enough for all types of players.

Yggdrasil has created a good pokie in Jackpot Express. It looks great with its riverboat casino theme and pays quite nicely, especially good value if you look on Pokiesource.co.nz for the best no deposit bonuses we have available. You can win over 2,000 times your bet if you’re lucky with a combination of special features in the free spins round. At the same time, there’s also the possibility to hit one of three jackpots, with the biggest one worth 100,000 coins.

If you ask us, Yggdrasil has really struck gold with this pokie game.