The jaguar is one of the mightiest creatures to ever walk the Earth. It has also been associated with magical powers and is pretty mystique at its core. As such, it’s a ... Read Full Review 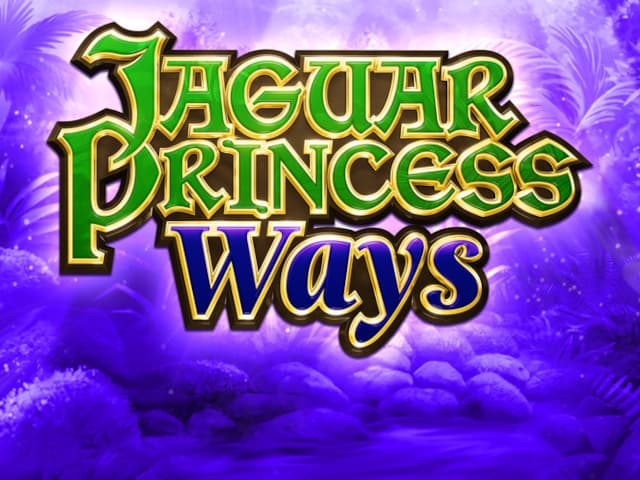 The jaguar is one of the mightiest creatures to ever walk the Earth. It has also been associated with magical powers and is pretty mystique at its core. As such, it’s a major inspiration for pokie developers, and High 5 Games has the latest jaguar-themed pokie. Called Jaguar Princess Ways, it’s a mix of classic and modern pokies fused into a unique game. It’s a sequel to the very successful Jaguar Princess pokie by the same studio that was released in 2013 and came with 50 paylines and low variance.

A 96% RTP pokie with medium variance, Jaguar Princess Ways pays more often than highly volatile titles. Just like the majority of the studio’s releases, the pokie relies mostly on symbol combinations to deliver big wins. Jaguar Princess Ways takes everything a step further with the introduction of Split symbols that pay double and count as two in winning combinations.

It’s a no-frills pokie without any unnecessary features that makes it a great choice for new spinners. You can try it now in demo mode or play for real money or with the biggest no deposit bonus in any High 5 Games casino.

Jaguar Princess Ways doesn’t reinvent the wheel when it comes to online pokies. It’s a simple-looking pokie with great visuals. The 5x3 reel set makes it simple enough for new players. As a jungle-themed pokie, it’s clear what the background shows. High 5 Games has done a great job with the graphics, capturing the jungle with colours that pop out.

There should be no question what the symbols represent. It’s all right there in the name. You’ll see 3 premium jaguars on the reels along with princess and jungle-themed card royals. The princess herself pays the most – 500x if you can land 10 of these symbols (via split symbols) on a payline. The jaguars are way behind since they land in singles only, paying up to 40x the bet. There’s a Wild and a Bonus symbol too, each one playing their respective roles.

Overall, this is a jungle-themed pokie from start to finish, including the audio and sound effects.

The Jaguar Princess Ways pokie has been developed on the HTML5 platform. That makes it available on a variety of Android and iOS devices, without the need to download the best pokie apps to spin it.

Place a bet between $0.50 and $400 per spin and hit the Spin button to start playing the game. The size of the bet also determines the Multiplier values. The higher it is, the bigger the Multipliers.

The Jaguar Princess Ways pokie is pretty straightforward. You have 243 different ways to win, so it doesn’t rely on a set number of paylines like 10 or so. For the biggest prizes, you’ll have to max your bets out. That’s not necessary, of course – you can still hit decent wins thanks to Wilds and Split symbols in the base game.

Unlike its predecessor, Jaguar Princess Ways has upgraded the ways to win and the symbols too. The princess pays the most – 50x for five on a line. However, it can also appear as a Split symbol showing two princesses which count double. For example, five of these symbols pay like 10 all the way up to 500x the bet.

The supporting jaguar cast pays a lot less, but thanks to Wilds, you can earn decent wins. Unfortunately, there are no special features you can count on in the base game.

You can expect better action in the Free Spins Round that is triggered traditionally with 3 Scatters. You get 15 free spin bonuses to start with. The gameplay is pretty much the same as in the base game, except Wilds and split symbols can land more often.

The RTP of the Jaguar Princess Ways pokie is set at 96%. It’s a typical number for medium volatile pokie games like this one. With a bit of luck, the maximum you can win in this pokie is 2,850x your stake.

It took almost a decade, but High 5 Games finally treated its fans to a Jaguar Princess sequel. It comes with Expanded Ways to win and similar gameplay in a solid, no-frills pokie that will appeal to new and seasoned spinners.

It may not have many features and it may not pay a fortune, but it’s a great trek through a lush jungle you shouldn’t ignore at the best online pokie sites.

The Jaguar Princess Ways pokie was released by High 5 Games. It’s one of the most popular studios in the industry, having released hits such as Lucky Lassie and Feather on the Nile.

No, it’s not – the variance is set to medium. This means varied wins that land frequently, although we’d be careful with our bets in the beginning.

Can I play Jaguar Princess Ways for free?

Yes, you can. Log in to your favourite High 5 Games casino and try the demo to see how the pokie works.

What sort of symbols are on the reels of the Jaguar Princess Ways pokie?

As a jungle and jaguar-themed pokie game, you’ll see 3 types of jaguar and jungle-themed card royals. The princess is there too, appearing in singles and doubles.

Is there a jackpot in the Jaguar Princess Ways pokie?

No, there isn’t a jackpot to hit in the Jaguar Princess Ways online pokie.

How do the Split symbols work in Jaguar Princess Ways?

The jaguar princess herself is the only simple that appears in Split mode. As such, it pays much more than the single, up to 500x the bet.

How many paylines does the Jaguar Princess Ways pokie have?

Is there a promo code I can use on the Jaguar Princess Ways online pokie?

No, we currently have no promo code to use on the Jaguar Princess Ways pokie. Keep checking our site – there might be one to use later.

Which pokies are similar to Jaguar Princess Ways?

The original Jaguar Princess pokie from 2013 is pretty similar to this one. You can also check out Jaguar Temple by Thunderkick or Jaguar Gold by Skywind.

When was the Jaguar Princess Ways pokie released?

The Jaguar Princess Ways pokie was released on January 13, 2022.