Remember Conan the Barbarian? The legendary sword and sorcery hero created by Robert E. Howard was successful in books and comics 50 years ago, but made a real splash on the big ... Read Full Review 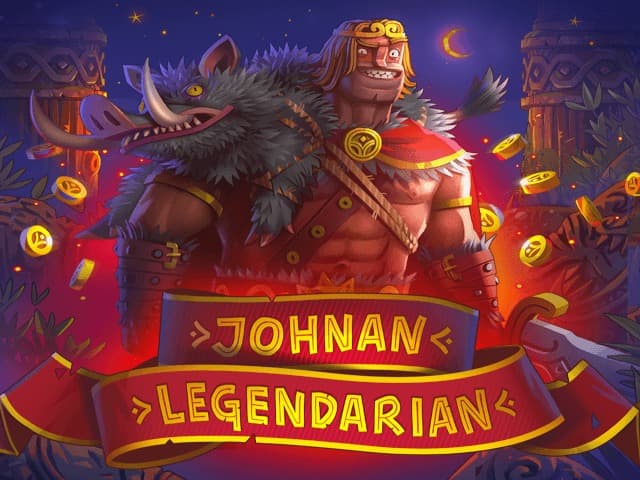 Remember Conan the Barbarian? The legendary sword and sorcery hero created by Robert E. Howard was successful in books and comics 50 years ago, but made a real splash on the big screen in the 1982 and 1984 films played by Arnold Schwarzenegger. It was the role that launched the Austrian actor’s career and helped the character become a hit across various media.

Obviously inspired by the legendary character, Yggdrasil has just released a new pokie called Johnan Legendarian. It’s a quirky take on the sword and sorcery hero staring the powerful Johnan. The pokie game was developed by Peter & Sons, an up-and-coming Armenian studio that has created several hits so far for the Maltese giant.

Johnan Legendarian is a wonderful trip through a myth with amazing graphics and gameplay. It’s a pokie with 10 paylines and 5 reels where you can win over 5,000x your stake. The brute adds finesse to the gameplay which is bolstered by both a free spins and Super free spins round that can deliver legendary sums of cash.

All Yggdrasil-Peter & Sons collaborations look great, but this time, the studios outdid themselves. Johnan Legendarian is a fantastic-looking pokie. Some players may mistake it for a video game and they wouldn’t be far from the truth – it truly looks like a sci-fi RPG. Johnan is especially detailed, standing right next to the reels and slashing mythical monsters on his quest for lost cities.

In technical terms, the Johnan Legendarian pokie has a 5x3 reel set with familiar gameplay. All the buttons are on the usual spots so you shouldn’t find it hard to play. The game has 10 paylines that pay from left to right. You can click on the symbols on the reels to reveal their payouts.

There are 10 symbols in total. Five are low-win card royals, while the character symbols pay more. The bonus wizard is the highest-paying symbol, offering 500x your stake for five on a line.

Johnan Legendarian is a mobile-optimized pokie game you can easily play on your phone. It doesn’t matter if you’re an Android or iOS fan – Johnan himself isn’t taking sides in this battle. Just head to one of our top mobile casinos via your browser and spin the pokie to win epic cash rewards.

To start the epic adventure, you will need to set your bet first. You can choose between 0.10 and 50.00 per spin – that’s a range-wide enough for most players. When you’re ready, hit the spin button to make the reels turn with nice animation, typical for Yggdrasil Gaming’s pokies.

The base game plays just like you expect it to. You’ll be landing mythical beasts for Johnan to slash and reveal cash prizes. There are no special surprises in the base game save for the high-paying bonus symbols.

Every time one lands on the reels, it will be collected in the meter below the reels. You’ll also see a counter that can go as high as 770. Hit that number, and you will enter the Super free spins round where you can land the highest payouts.

Yggdrasil is hell-bent on producing pokie games which are unlike any other (see Hades Gigablox). The same is true of Johnan Legendarian, which comes packed with plenty of features. Before the Super free spins round, you have free games to play first. You’re more likely to enter the free games round first thanks to the bonus symbol (Wizard) that acts as both a wild and scatter. Three of these will double your win and reward you with 10 free spins as well. If you get four or five, you still get 10 free spins, but this time the instant cash reward is 20x and 200x your bet.

In the free spins round, special symbols can expand to a reel to cover it. If you land three or more scatters the free spins counter is reset and you get an additional symbol.

As mentioned earlier, the game also makes great use of a Super free spins round. It can only be accessed when you fill the meter with bonus symbols. It plays just like the free spins round with three or more scatters resetting the counter and awarding 10 additional spins.

The Johnan Legendarian online pokie has an RTP of 96.03% which is smack in the middle of the industry average. The pokie game is highly volatile and offers maximum wins of over 5,000x your stake.

Johnan Legendarian is yet another excellent Yggdrasil pokie with a solid range of features. The epic journey is bolstered with two bonus rounds and a wild-eyed Wizard that acts as both wild and scatter.

Help Johnan Legendarian on his quest to lost cities and slash the monsters to unearth hidden ancient treasures.

Who’s the developer behind the Johnan Legendarian pokie game?

The Johnan Legendarian online pokie has been developed by Peter & Sons exclusively for the YG Masters platform. The pokie is published by Yggdrasil Gaming, one of the best studios on the iGaming market.

The Johnan Legendarian pokie RTP is set at 96.03%. That’s not particularly high and exciting, but it’s still pretty solid, especially when you see the pokie’s winning potential.

Does the Johnan Legendarian online pokie have a jackpot?

No, the Johnan Legendarian pokie doesn’t feature a jackpot. However, you can hit a win of over 5,000x your stake if you’re lucky.

Is there a free spins round in the Johnan Legendarian pokie?

Yes, there is a free spins bonus round in the Johnan Legendarian pokie. It also features a Super free spins round that can be accessed when you fill the bonus symbol meter.

Can I win real money in the Johnan Legendarian pokie?

Yes, you can win real money in the Johnan Legendarian pokie. Of course, you will need a funded casino account for it with real money deposited into it.

Yes, the Johnan Legendarian pokie has a demo version.

Are there any promo codes I can use on the Johnan Legendarian pokie?

At the moment, there are no promo codes we can share for the Johnan Legendarian pokie. Check back our site regularly to spot great deals and offers.

How many paylines does the Johnan Legendarian online pokie have?

The pokie has 10 paylines that can’t be adjusted. They pay traditionally from left to right.

Do I need to download the Johnan Legendarian pokie to play it on my phone?

No, there’s no need to download the Johnan Legendarian pokie to play it on your phone. It is available on instant play platforms at the top Yggdrasil Gaming casinos online.

What pokies are similar to Johnan Legendarian?

There have been plenty of epics based on Conan the Barbarian and similar characters released in the past. If you like Johnan Legendarian, you will certainly enjoy Playtech’s Aged of the Gods pokie series. NoLimit City’s Barbarian Fury, Tuko’s Barbaria, and Cayetano Gaming’s Barbarian Treasures are all pokies that come pretty close to the latest Yggdrasil release.