Back at the start of the 20th Century, the name Karen meant very little. It was a name reserved for your friend’s mother and perhaps the occasional sitcom character. The rise of ... Read Full Review 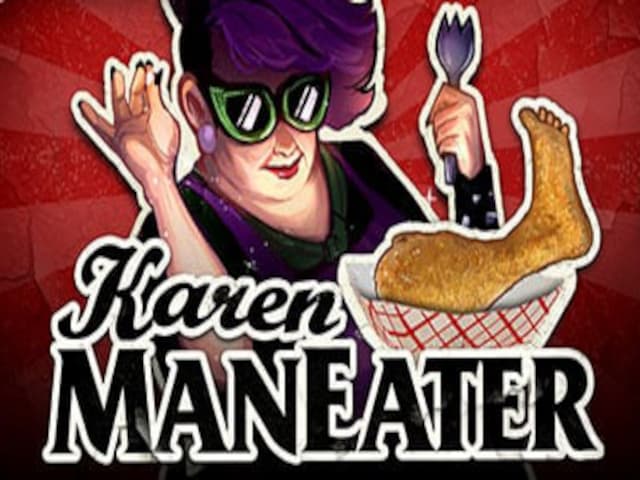 Back at the start of the 20th Century, the name Karen meant very little. It was a name reserved for your friend’s mother and perhaps the occasional sitcom character. The rise of meme culture saw this change drastically, and Karen has now become a name that is instantly associated with a particular type of woman. A Karen, according to the general consensus in the Urban dictionary is a middle-aged white woman who loves complaining, thinks she has the answer to everything, and in some cases, is bigoted and racist. Leave it then, to Nolimit City, one of the industry’s most innovative developers, to take the Karen idea and turn it into a hugely engaging and fun pokie game. The Karen in question here has more than just complained, she has burned down an entire restaurant with her rage and turned it into a post-apocalyptic hellscape that serves up male flesh. This sounds wild, and Nolimit City has managed to serve up a pokie that is just as crazy. Collect the best deposit bonus and meet Karen yourself!

Hell hath no fury like a Karen scorned, or that’s at least what popular culture tells us. Nolimit City has taken this to the extreme, with the titular Karen burning down a restaurant and making the surrounding area look like something out of Mad Max. Nolimit City has a habit of creating darkly comic pokies and this is one of its funniest yet. As the name may suggest, Karen is also a man-eater, which means we see strings of meat hanging from the reels, and a collection of men who are served up during the bonus rounds. The animations that take place in the bonus rounds also deserve a special mention. Anyone with a slightly darker sense of humour will no doubt be grinning from ear to ear during these.

Conventional gameplay really isn’t Nolimit City’s thing, and this is evident with the Karen Maneater pokie game. The title has six reels, with the first containing two symbols and the next five containing three. These can change at different points in the game. The base game has 486 ways to win, but once again, this can expand depending on the game mode being played.

Clicking on the Dollar button in the bottom corner will allow you to change your pokie, with $0.10 being the lowest option and $70 being the highest, which is a betting range that is going to suit most players.

Like all the best pokie games from Nolimit City, the Karen Maneater pokie has been developed using HTML5 technology. This ensures that players can play the game on a wide variety of different devices and platforms. It still manages to keep its zany design and wild gameplay features regardless of how it is being played.

Karen Maneater has a huge variety of different bonus features on her menu for players. Many of Nolimit City’s most popular features make an appearance here, with some new additions thrown in for this game.

Firstly, as we have noted elsewhere, the reels in this pokie will expand. They can do so to offer tens of thousands of different ways for players to score a win. Reels will expand when a Scatter Symbol lands on the reel next to them. The Scatters will only appear on reels 2-5. Next up is the xWays mechanic that has been used in several top online pokies by Nolimit City.

xWays Symbols count as multiples of a random symbol, and they display this number when they land. It is effectively a Mystery Feature Bonus with a little twist on top. There are also larger Infectious xWays Symbols that can land on reel 1 and can be worth up to seven symbols.

Finally, there is the Bonus Meal round, which serves as the pokie’s Bonus Spins. This is triggered by landing three or four of the Scatter Symbol. Three of them will reward 7 spins with 3 Sticky xWays Symbols, while four will launch 10 with 4 Sticky xWays. To make this all the more exciting, the xWays number will increase on every spin and display up to 42 symbols.

If you want to skip the queue and get your hands on one of these tasty bonus options, then you can use the Buy Bonus option that the game has made available.

The Karen Maneater online pokie game has an RTP of 96% in the base game, this does change in the bonus rounds, reaching a high of 96.61% in the Bonus Meal round. Needless to say, these are strong numbers and will attract players. The game is highly volatile and offers a maximum win of 11,757x the overall bet.

You will certainly not be needing to complain to your manager about this one. Karen Maneater is an absolute riot. It takes everything that has made Nolimit City pokies successful in the past and merges them together really nicely. The company just continues to deliver highly engaging and memorable titles. This is a delightfully wicked, innovative, and hugely enjoyable online pokie game that is well worth taking for a spin at the most popular online pokie sites.

Who made the Karen Maneater online pokie game?

The Karen Maneater online pokie game was designed and developed by Nolimit City. Nolimit City is widely regarded as one of the most innovative pokie developers in the industry. You can find reviews of several other Nolimit City pokies like Infectious 5 xWays or Misery Mining here at PokieSource.

How many ways to win are there in the Karen Maneater online pokie?

There are 486 different ways to win in the Karen Maneater pokie base game. This number can expand rapidly into the tens of thousands during the bonus features, and there is no official number of the amount that is available.

What is the Scatter Symbol in the Karen Maneater pokie?

The Scatter Symbol in the Karen Maneater pokie game is the Raccoon Symbol. This is used to expand the reels in the game as well as launch the pokie’s Bonus Spins Round.

How much can I bet in the Karen Maneater pokie?

The Karen Maneater pokie game allows players to bet between $0.20 and $70 on any given spin. This is a fairly standard betting range that should cover most players’ budgets.

Can I play the Karen Maneater pokie game for real money?

Absolutely! There are many top online casinos that will allow players to play the Karen Maneater pokie game for real money. If you want to find a casino that suits your needs, then check out our detailed online casino reviews elsewhere on the site.

Is there a jackpot in the Karen Maneater pokie?

No. There is no fixed or progressive jackpot that players can win in the Karen Maneater online pokie game. The biggest win that can be won by a player in the pokie is 11,757x the overall stake. This is won through the bonus features.

Is there a Buy Bonus function in the Karen Maneater pokie?

Yes. The Karen Maneater pokie allows players to buy their way into any of the pokie’s bonus features by paying a specific price. This feature may not be available in all locations.

What other pokies are similar to Karen Maneater?

We would highly recommend taking any other Nolimit City online pokie game for a spin for a similar experience. Titles like San Quentin xWays, Das xBoot, and Mental are all great examples of what the company is capable of producing.

Can I play Karen Maneater on my mobile?

Absolutely! The Karen Maneater pokie game has been optimised to work on a number of different mobile devices and platforms. This includes phones on both Android and iOS operating systems.

What is the RTP of the Karen Maneater pokie?

The Karen Maneater Return To Player starts off at 96% in the base game. It will increase and change as players activate different pokie bonus features. The highest it can reach is 96.84%, which puts it above the industry average.