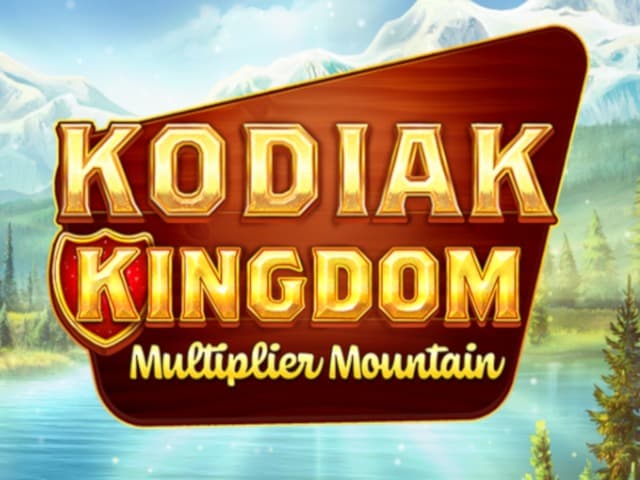 Microgaming’s new Multiplier Mountain series arrived in 2020 to wide critical acclaim. Silverback: Multiplier Mountain was the first entry in the nature-themed pokie series, which combined all-school gameplay with 4,096 paylines and big prizes. The developer’s famous studio JustForTheWin has taken things to a whole new level with the second pokie in the series Kodiak Kingdom.

The Multiplier Mountain series has gone north for this instalment, visiting the Kodiak community in Alaska. Kodiak Kingdom is a pokie based on Alaska’s famous wilderness. It stars grizzly bears, eagles, and salmon in the lead roles, with Multipliers on the centre stage as well. The sequel retains most of the features of the first Multiplier Mountain pokie, so you get 4,096 paylines. What’s changed is the top prize which is 5 times higher this time.

The Kodiak Kingdom pokie is available in any Microgaming casino for free, real money, or with a bonus.

Kodiak Kingdom is a 6x4 pokie game with a pretty familiar setup. Microgaming’s pokies are usually easy to play, and this one is no exception. The reels are set straight in the middle of the screen, with the controls flanking them left and right. Even if you’re a complete newbie in the world of online pokies, you shouldn’t have trouble playing this one.

As a nature-themed pokie, the pokie shows a serene Alaska setting by the river in the background. Glaciers can be seen further in the background, and the design and visuals are top-notch as expected. So is the audio and the sound effects that will immerse you in the great atmosphere.

The brown Kodiak bear pays 7x your stake for 6 on a line. There are 2 types of wilds – a regular one and a Multiplier Wild that can nicely enhance your payouts.

The Kodiak Kingdom pokie is available on all Android pokies and iOS-powered online casinos. Thanks to the HTML5 technology platform it was built on, you can play it on the go via your favourite mobile browser.

Before you set off on this Alaskan adventure, you should set your bet first. The minimum you can go for is £0.20 per spin, while the highest bet is £10. You start the base game hoping to land the top-paying symbols or Multiplier Wilds. Those are your best chance at hitting fantastic wins that can top hundreds of times your bet.

The Multiplier Wilds can land on any reels and give an instant boost. With each Multiplier win, the count goes up by +1. In the base game, the Multiplier resets on losses, but it keeps going higher in the Bonus Round.

You can expect much better action in the Free Spins Round that is traditionally triggered by Scatters.

Three or more Scatters in the base game will trigger the Bonus Round. You get 10 free spins for 3 and 30 for a maximum of 6. The action in the Free Spins Bonus Round is mostly similar to the base game, with the exception that Multipliers don’t reset on losing spins.

Instead, the Multiplier count keeps rising, giving you better opportunities to win big. Of course, Multiplier Wilds are more frequently landed in the Bonus Round. Retriggers are possible too, with new Scatters giving you extra spins. One Scatter only gives you a single free spin but land 6, and you get 30.

In some countries, you can buy your way into the Bonus Round for a price. If you play at the default bet of £1, it’ll cost you £90 to activate it.

The Kodiak Kingdom pokie RTP is 96.2%, ideal for a highly volatile pokie. The action takes place across 4,096 paylines and can deliver wins up to 25,000x your stake.

Kodiak Kingdom is a great instalment in the Multiplier Mountain series. With this sequel, Microgaming has improved just about every aspect of the original while keeping the two mostly the same.

It’s a delight for old-school pokie fans that don’t want too many modern features. It’s simple to play and yet quite rewarding, making Kodiak Kingdom a pokie worthy of your attention at our recommended online pokie sites.

The Kodiak Kingdom pokie was developed by JustForTheWin for Microgaming. The Isle of Man studio published the pokie as a new instalment in its fresh Multiplier Mountain series.

The RTP of the Kodiak Kingdom online pokie is set to 96.20%. That’s perfect for highly volatile pokie games like this one.

Yes, it is. You should be careful with your bets when you play it. It may not be on the extreme side of volatility, but still, it can burn through your bankroll.

Is Kodiak Kingdom a Megaways pokie?

No, it isn’t. Microgaming loves using the Megaways engine, but it’s not the case this time around. Instead, the pokie has 4,096 paylines but pays wins for standard symbol combinations.

What special features are active in the Kodiak Kingdom pokie base game?

There aren’t that many special features in the Kodiak Kingdom pokie game except for the Multiplier Wilds. Those are active in the base game and Bonus Round and can spice up your wins whenever they hit the reels.

Is there a Free Spins Bonus round in the Kodiak Kingdom pokie?

Yes, there is. Three or more Scatters can trigger it, giving you between 10 and 30 free spins. The bonus can be retriggered and features Multiplier Wilds more frequently.

Which symbol pays the most in the Kodiak Kingdom online pokie?

The brown bear is the king of the Kodiak kingdom, and it’s the king in the pokie too. Six brown bears on the reels will pay the highest 7x payout.

Can I play the Kodiak Kingdom pokie on my phone?

Yes, you can – it’s available on Androids and iPhones. No need to download anything. Just open a Microgaming casino from a mobile browser and play it for fun or real money.

Which pokies are similar to Kodiak Kingdom?

If you like the visuals and gameplay of Kodiak Kingdom, we suggest trying Silverback: Multiplier Mountain. It’s the first pokie in the same series, taking you on a trip through an African jungle rather than Alaska. The action and most of the features are pretty familiar.

When was the Kodiak Kingdom pokie released?

The Kodiak Kingdom pokie was released on November 16, 2021.