Yggdrasil seems to have the hots for ancient mythologies. The popular game studio has so far delved deep into Norse mythology with its Vikings series of pokies. It has recently turned ... Read Full Review 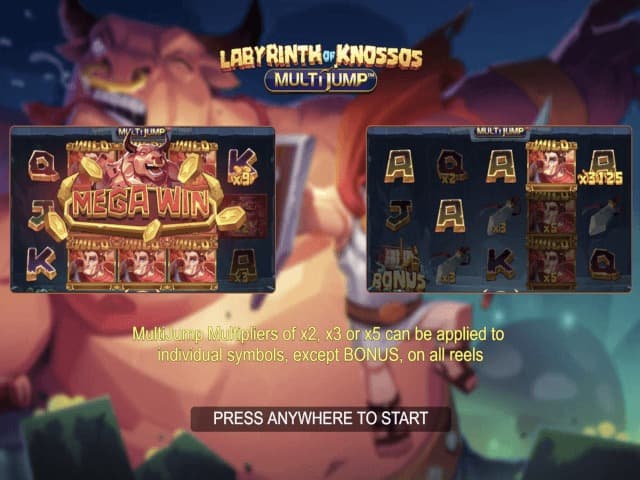 Yggdrasil seems to have the hots for ancient mythologies. The popular game studio has so far delved deep into Norse mythology with its Vikings series of pokies. It has recently turned its attention to Greek mythology with the release of its latest pokie titled Labyrinth of Knossos MultiJump.

As the name suggests, it’s a pokie that introduces a new feature known as MultiJump. Available in the free spins round, it’s a multiplier feature that can boost your wins sky-high. With multipliers over the 3,000x range, this is a pokie that can pay well.

The Labyrinth of Knossos MultiJump pokie is a retelling of the Minotaur and Theseus story that will keep you on your toes. Play it today for real money, and you can win yourself a reward worth nearly 5,000x your stake.

Yggdrasil’s pokies have never been what you can call standard. The Labyrinth of Knossos MultiJump online pokie is no exception. While it looks fairly regular on the surface, the real surprises are hiding underneath the cartoonish layers.

The pokie is set in the labyrinth of the Knossos palace where the Minotaur was held. The pokie comes with sharp and colourful visuals and a rousing soundtrack that keeps the action running. While the visuals are cartoonish, they fit in with the theme pretty well. Yggdrasil Gaming’s pokies have always looked great and the Labyrinth of Knossos MultiJump pokie is a continuation of that tradition.

You don’t need to worry about spinning the pokie on any device. Its controls are fairly simple and placed at their own spots, so you shouldn’t have trouble spinning the reels.

Since its developed on the latest HTML5 technology, the Labyrinth of Knossos MultiJump online pokie runs perfectly across all devices. You can spin it for real money at recommended mobile casinos on your Android or iOS smartphones and tablets.

To start the pokie game, you’ll need to bet golden coins first. The bets go as low as 0.20 all the way up to 60.00 per spin. The pokie comes with the 243 ways to win mechanic, so you’ll have plenty of options to hit a solid cash reward.

The base game itself is not especially explosive. However, multipliers are the key element to big wins here. Some symbols can come with an x2, x3, and x5 MultiJump multiplier attached, and their values can be combined if you happen to land several on a winning line. In the base game, you’ll be hoping to land five Pasipha symbols that can pay 40x your stake for five on a line.

Those MultiJump multipliers also play a big role in the free spins round where they can really rev up the action.

You’ll need 3-5 sailing ships to trigger the MultiJump free spins feature. You can earn 10, 15, or 20 free spins. During this round, all symbols apart from bonus have a multiplier attached to them. Just like in the base game, landing several of them will combine the values. If you happen to land 5x multipliers on all reels, they will deliver a boost of up to 3,125x.

The Labyrinth of Knossos MultiJump pokie reaches its full winning potential in the bonus round. You can retrigger the bonus round too, earning more free spins and getting more opportunities to pick up some huge real money prizes in return.

The RTP of the Labyrinth of Knossos MultiJump online pokie is set at 96.42% which is better than the industry average. It’s a medium-volatile pokie that pays varied rewards. If you ‘unlock’ all MultiJump multipliers on all reels during the free spins round, you can earn a maximum reward of up to 4,679x your stake.

Yggdrasil’s latest pokie certainly has the mettle to deliver some truly big wins at top online pokie sites. The Labyrinth of Knossos MultiJump online pokie features a new and unique mechanic that has great potential. The MultiJump feature can deliver massive multiplier that can translate to sky-high wins.

With its cartoonish, yet sharp graphics and booming audio, Labyrinth of Knossos MultiJump is an excellent addition to Yggdrasil’s lineup.