In today’s day and age, it’s getting pretty uncommon to find low volatility pokies. Most providers just stick to highly volatile ones since they pay a lot less frequently. One of the ... Read Full Review 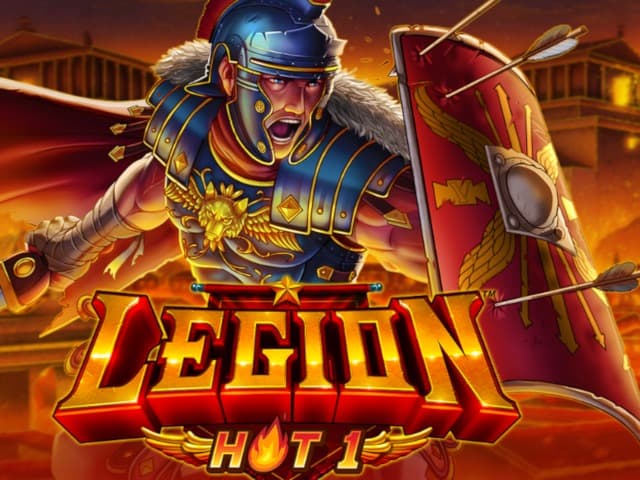 In today’s day and age, it’s getting pretty uncommon to find low volatility pokies. Most providers just stick to highly volatile ones since they pay a lot less frequently. One of the best pokie providers on the market, Yggdrasil Gaming, is known for its innovative and highly volatile pokies. The studio has recently decided to turn the page with the release of Legion Hot 1, a low-variance pokie with 243 ways to win.

The Legion Hot 1 pokie aims to become Yggdrasil’s big summer hit this year. Based on the Roman empire and legionnaires, Legion Hot 1 features plenty of special features that can boost your wins significantly. With multiplier wilds sticking to the Roman military insignia on the reels, you’ll be winning solid sums of cash frequently in this one.

Developed in collaboration with Hot Rise Games, the Legion Hot 1 online pokie is available for free and real money. Trying the demo is recommended, but the low volatility is simply too inviting to pass up on real money gameplay.

The Legion Hot 1 pokie has a 5x3 reel set that will be familiar to most players. As the name suggests, this is a pokie game based on the great Roman empire. The pokie has quite a unique skin on top of it, with the controls set to the right side. You’ll see an extra row blocked by sticks on the top and bottom of the reel, which comes into play later.

Not surprisingly, the Legion Hot 1 pokie looks great. That’s typical for Yggdrasil pokie games, with clear lines and sharply designed symbols. The Wild is a charging Roman legionnaire, with the coin paying the most – 500x for 5 of a kind. The shields play a special role in the pokie, opening the extra rows and boosting your wins in the base game and bonus round.

As you score bigger wins, the pace picks up, and the background light changes. The pokie will put you straight into the heat of the battle when you win big with war drums in the background and a buzzing atmosphere. Enjoy the amazing experience at the new online casino sites.

The Legion Hot 1 pokie is perfectly playable across all mobile devices. You can play it on your Android or iOS device with ease. During our Legion Hot 1 review, it worked smoothly and without any performance issues.

How to Play the Legion Hot 1 Online Pokie Game?

Setting your bet in the Legion Hot 1 online pokie is the first step toward hitting frequent wins. This can be done by clicking on the + and – signs above and below the Spin button – it’s a pretty simple design solution that we loved. When you’re ready, hit the Spin button in the middle to start the battle.

In the base game, you should look forward to the wilds and shields. The former can create stunning winning combinations and only land on reels 2, 3, and 4. The bonus shields come in different colours and appear on the same reels as well. However, their function is different.

Every bonus shield that lands on a reel improves it right away. The number of shields on the reels provides different modifiers as well.

• 1 shield: opens the 4th symbol at the bottom of the reels

• 2 shields: open the 5th symbol at the top of the reels

• 3 shields: add an x2 multiplier on the top or bottom extra symbols. If there are multiple multipliers, they are combined

This is the only feature in the base game, but it can be a very rewarding one. Keep hitting the multipliers, and you’ll be in for huge rewards.

You will need 4 shields to land on the reels in order to get to the free spins round. You get 10 free games, with the shields acting like wilds in this round. They also double the cash rewards for all wins they are involved in, with all previous improvements collected during the base game active in the bonus round.

The RTP of the Legion Hot 1 pokie is set to a solid 96.37%. That’s pretty high for a low variance pokie game that can shell out a maximum win of 2,525x your stake.

The Legion Hot 1 pokie is a great addition to Yggdrasil’s library. It’s a low volatility pokie with plenty of surprises that can boost your wins pretty nicely. Its hit frequency is pretty great if you ask us, making the Legion Hot 1 pokie a very worthwhile game to play for real money at our recommended online casinos.

Who created the Legion Hot 1 pokie?

The Legion Hot 1 online pokie was released by Yggdrasil Gaming in collaboration with Hot Rise Games. Yggdrasil is one of the top pokie providers in the business, having released dozens of hits so far.

What’s the minimum bet I can place on the Legion Hot 1?

The minimum bet you can place on the Legion Hot 1 pokie is $0.30 per spin. Considering that the game has 243 ways to win, that bet is pretty low.

What’s the RTP of the Legion Hot 1 online pokie game?

Yggdrasil has set the Legion Hot 1 pokie RTP to a solid 96.37%. That’s pretty high for a low variance pokie that pays frequently.

Are there free spins in the Legion Hot 1 pokie?

Yes, the pokie has a free spins round. It comes with extra wilds and additional enhancements that make it pretty rewarding.

What do the shields do in the Legion Hot 1 pokie?

The shields are a special symbol that provides different enhancements on the reels they land on. They also trigger the free spins round with multipliers and extra wilds that all but guarantee sky-high wins.

What’s the maximum win in the Legion Hot 1 pokie?

The maximum you can win in the Legion Hot 1 pokie is 2,525 times your bet. That’s a pretty solid win for a pokie with low volatility.

Do I need to download the Legion Hot 1 pokie to play it on my phone?

No, you don’t need to download anything to play the pokie on your phone. You can enjoy it via a browser on any Android or iOS smartphone or tablet.

How many paylines does the pokie have?

The Legion Hot 1 pokie offers 243 ways to win. It doesn’t have a fixed number of paylines you can win across.

Which pokies are similar to Legion Hot 1?

In love with the Roman empire? Try Rome: Caesars Glory by Playson or Nero’s Fortune by Quickspin if you’re looking for similar action to the Legion Hot 1 pokie. Victorious MAX by NetEnt also springs to mind.

When was the Legion Hot 1 pokie released?