Leprechaun Hills is a simple pokie game by Quickspin in which the main feature is the Lucky Re-spin which gives you a free spin with one symbol massively stacked. This Irish themed ... Read Full Review 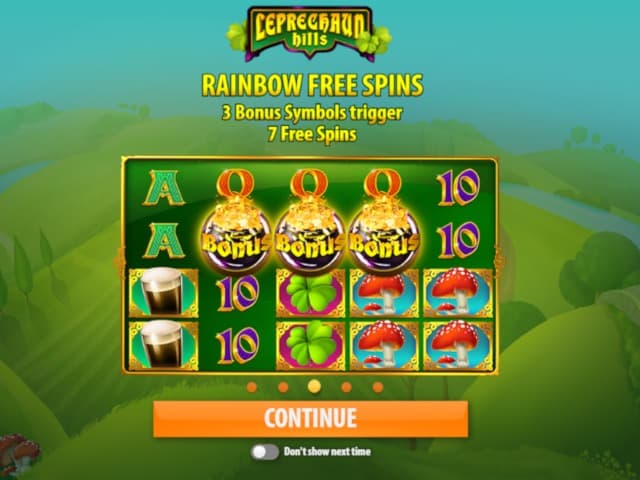 Leprechaun Hills is a simple pokie game by Quickspin in which the main feature is the Lucky Re-spin which gives you a free spin with one symbol massively stacked. This Irish themed pokie was released in 2017 and it features all the usual Irish symbols – Leprechaun, Clover, Beer and Horseshoe.

As soon as you start the game you'll be presented with a slideshow of the main features of the pokie game, and once the game loads you only need to choose your bet. There are 11 levels to choose from, the lowest one is 0.24 per spin and the highest one is 80.00 per spin. You can also choose to use Fast Play or Autoplay, which is actually recommended as Leprechaun Hills plays quite slow.

This is a 5x4 game with 40 paylines, and there aren't too many surprises here, except that you get the re-spins feature which plays a big role in game mechanics of Leprechaun Hills. Whenever you land a win that involves a medium-win symbol, which is all five symbols which aren't card symbols, you'll get a Lucky Respin. This is a whole new spin as no symbols are held, but the winning symbol will appear stacked on all reels so you'll have a chance to land a big win, even a full board win.

The five medium win symbols pay 5x, 10x or 20x for five-of-a-kind, which is good, especially as the Lucky Respin feature can bring many more winning paylines. Full board win of the best symbol, the Leprechaun, would be worth 800x your bet. Wild can help a great deal, as it appears stacked on reels 2 and 4, and you'll often your reel 2 will be full of Wilds, but the Lucky Respin won't necessarily amount to anything despite the large number of stacked symbols.

Three Bonus Scatter symbols trigger the free spins game, and you'll get 7 free spins with a Rainbow Symbol, which is a mystery symbol that can transform into any of the medium win symbols. This feature won't necessarily bring big wins, and it's the Lucky Respin that is the main feature of the game and that will be bringing your balance back to positive.

Variance is high in Leprechaun Hills, which makes this game a bit difficult to play since the maximum available win isn't that big, and you need to endure the high variance every step of the way. Theoretical return to player (RTP) is 96.49% and that's not bad, it's an average value for Quickspin, but it's difficult to make this pokie pay.

Leprechaun Hills is a simple game that doesn't really deserve the Leprechaun theme, as pokies with this theme are usually expected to offer something incredible both in terms of gameplay and the chance to win big. Usually the Leprechaun is expected to bring much more than a simple 0.5x, 3.75x and 25x win.

Graphics are decent but again not special, just like this entire game, and all the symbols are nicely drawn but somehow lack the true appeal. We could say that this is a game for fans of Irish themed pokies who must play each and every title, and a decent game altogether, but it lacks the magic.

A pokie game to consider playing if you're into Irish themed pokies is Finn and the Swirly Spin by NetEnt, it has an almost identical RTP to Leprechaun Hill's and is more innovative. If you want to try out Leprechaun Hills yourself to see what's it all about, visit one of our recommended casinos. You might also play Northern Lights, which is another re-spins game by Quickspin, and a better one than Leprechaun Hills.