Ooh Aah Dracula online pokie is a high-action, five-reel and ten-payline game that's more slapstick than spooky, with a main character in the vein of Leslie Nielson over Christopher Lee. Rather than ... Read Full Review 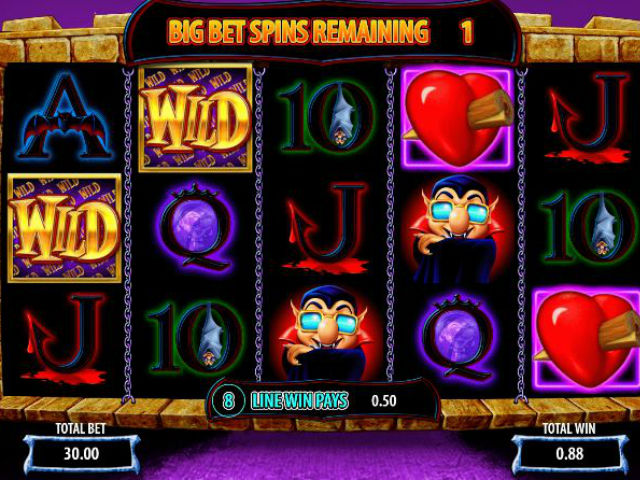 Ooh Aah Dracula online pokie is a high-action, five-reel and ten-payline game that's more slapstick than spooky, with a main character in the vein of Leslie Nielson over Christopher Lee. Rather than frighten the living daylights out of you, with Ooh Aah Dracula software provider Barcrest Games has crafted an online pokie that's colourful and cartoony, making it more fun to be in the esteemed company of the titular vampire. Feast your eyes on this Ooh Aah Dracula pokie review to see if it's worth a little bite.

The character of Dracula comes in all shapes and guises, through film, TV, books, theatre and other slot games. Ooh Aah Dracula seems to take its inspiration from Mel Brook’s Dracula: Dead and Loving It, swapping dark and brooding for bright and cheerful. Dracula appears as one of the icons in some modish Elvis-style shades, alongside characters such as a busty female vamp and a were-rabbit. Playing the classic pokie starts up a brief segment of Transylvanian jive music that fits perfectly with the upbeat tone of the game. Those who covet the company of this chilled Dracula will be happy with the high return-to-player of 95.65%, as well as the hilariously named Stake It Or Leave It bonus feature.

Ooh Aah Dracula features traditional pokie game symbols such as 10, J, Q, K, and A, but with a fun gothic twist. A bat hangs upside down, sleeping in the 10, while another forms the horizontal bar of the A symbol. The K becomes a candelabra and the J is transformed into a hooked devil’s tail. The higher paying symbols like Dracula’s bride and the Were-Rabbit pay 200 times the wager if landing a full payline. Bran Castle, upon which the legend is based, also appears on the reels and offers 500 times the bet if five appear in a row. The fanged, grinning Count Dracula is worth up to 1000 times the bet, but the symbol to keep an eye out for is the Ooh Ahh Dracula logo, which could be worth an exceptional 5000 times the bet if it strikes on all columns of a payline.

The Wild symbol substitutes for all symbols, with the exception of the bonus Staked Heart, which acts as the scatter symbol in the game. Striking three of these scatters will award you with 15 free spins. Before the free spins bonus begins, one of the other symbols is highlighted as the Wild and remains so until the free spins are over. If you're lucky enough to find four Staked Hearts, then the Stake It Or Leave It bonus round begins. It's similar to the free spins, but with a tasty twist. After the standard 15 free spins, you can choose to take the win and end the bonus round or continue to the second round, rejecting the first win. You then have ten free spins in round two to try and improve on the first round’s winnings. Scoring a full payline of Staked Hearts activates the Super Stake It Or Leave It bonus. It operates in the same way as the last bonus, but with an extra bonus round with five free spins.

Remember, if after the second round you wish to try your luck at a third free spin round, you'll lose whatever was won in round two. One of the most ingenious pokie game features that pops up during the free spins is the best strategy indicator. A bony arm rises from a grave and sways left or right depending on how the game is progressing. If it lurches to the left, it’s time to collect, but if it swings to the right, then it might be better to move onto the next round. You've been warned.