The name Queenie is a remnant of the old days of the British Empire. During Victorian times, it was a very popular name for girls, while later it was used as a ... Read Full Review 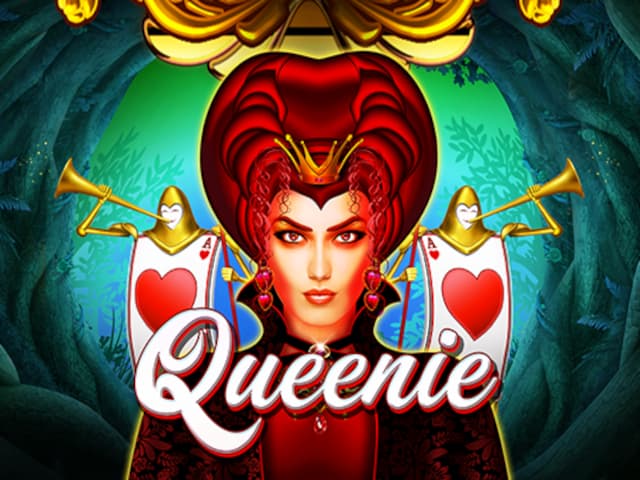 The name Queenie is a remnant of the old days of the British Empire. During Victorian times, it was a very popular name for girls, while later it was used as a more affectionate name for the Queen herself. It was also sometimes used as a chummy version for the Queen of Hearts in Lewis Carroll’s classic Alice in Wonderland. While we’ve forgotten all about it for centuries, Pragmatic Play has dusted it off and brought it back with the Queenie pokie.

A pokie by Pragmatic Play with 243 ways to win, Queenie has an appealing RTP of 96.51% paired with high variance. It’s a very fun and rewarding pokie with maximum wins projected at 4,200x the bet. The pokie draws inspiration from Lewis Carroll’s book, portraying Queenie herself on the splash screen and characters from the book on the reels. It’s a mad world out there paired with crazy wild features that can lead to stunning cash rewards.

Available for free and real money in all Pragmatic Play pokies casinos, Queenie is an enchanting ride that won’t leave players unmoved.

Right from the get-go, you’ll be impressed by the level of detail Pragmatic Play put into this pokie. It looks sharp in visual terms, with Queenie’s eyes following each one of your moves. As mentioned earlier, this is a pokie based on Alice in Wonderland, so expect to see the Mad Hatter, white rabbit, and other characters from the books. Queenie rules them all in payout terms, delivering 10x for five on a line.

Speaking of lines, you have 243 ways to win. The premiums are joined by low-win card royals as well as a Heart Wild. The pokie comes packed with excellent action in the base game boosted by spins on a special wheel that can lead you to the Bonus Round or one of the jackpots.

The layout is pretty familiar, so you shouldn’t have trouble playing the pokie regardless of your device.

Thanks to the HTML5 platform it was built on, Queenie is available on both Android and iOS devices. You can play the real money pokie easily from your browser without downloading any app or software.

The Queenie action starts after you place a bet. The range is impressive, allowing you to bet from $0.25 to $125 per spin. Hit the Spin button or set automatic spins if you don’t like clicking all the time.

There’s not a lot of major action in the base game. This isn’t a Megaways pokie with Cascades or whatnot. Wins are formed traditionally and can be completed by Wilds. However, aside from their regular role, Wilds in the Queenie pokie give you a shot at a spin on the all-powerful wheel. This feature is triggered whenever one or more Wilds land. The Wheel is divided into many segments, some offering cash prizes, others offering modifiers.

You can also trigger the Bonus Round from the wheel, eliminating the need for Scatters.

As mentioned briefly, a Wild landing on the reels will give you a spin on the Feature Wheel. When triggered, the wheel will appear atop the reels, awarding the following bonuses or modifiers:

The first two modifiers are self-explanatory. You can get up to 100 pokie free spins on the Feature Wheel, with the bonus playing just like the base game. However, this time, all Heart Wilds guarantee a Feature Wheel spin.

Last, but not least, if the wheel stops on the Jackpot segment, you can win one out of four jackpots:

These are by far the biggest cash rewards in the Queenie pokie, so you’ll be lucky if the wheel stops at that segment.

The RTP of the Queenie online pokie is a very solid 96.51%. It’s a high variance title with maximum wins of 4,200x, including the Grand jackpot.

Queenie doesn’t stray too much from the regular Pragmatic Play formula, but it’s still a nice addition to the studio’s portfolio. It’s an excellent game for Alice in Wonderland fans and a fun overall experience. The pokie has one big feature in the Feature Wheel, but it’s more than enough to appeal to all players.

Try the Queenie pokie right now at the best online casinos and go win big on the other side of the Looking Glass.

Who developed the Queenie pokie?

The Queenie pokie was developed and published by Pragmatic Play. It’s one of the most popular studios in the business, responsible for hits such as Big Bass Bonanza.

The minimum bet you can place is $0.25, low enough for new players and those who’d like to test their luck.

Is the Queenie pokie available for free?

Yes, the Queenie pokie is available to play for free at many online casinos.

Can I play the Queenie pokie on my phone?

Yes, you can. The pokie is fully mobile-optimised and available on a range of mobile devices. You can give it a go on any Android and iOS smartphone or tablet.

Do I need an app to spin it on the go?

No need to download anything – just start it from your mobile browser and spin it right away.

How many paylines does the Queenie pokie have?

The Queenie pokie doesn’t rely on traditional paylines, instead of coming with 243 ways to win. It’s a mechanic often used by Microgaming, although Pragmatic has been fond of it as well.

Is Queenie a Megaways pokie?

No, it isn’t. It features a regular, yet rewarding, math model that doesn’t rely on the Cascades and similar features.

How do I get to the Free Spins Round in Queenie?

The key to all the major features in the Queenie pokie is the Feature Wheel. You get a chance to spin it whenever a Wild lands on the reels. In the Free Spins Round, which you can earn on the wheel itself, every Wild guarantees a spin on it.

Can I win a jackpot in the Queenie pokie?

Yes, there are four jackpots that you can hit on the Feature Wheel. The biggest one, Grand, pays 4,000x the bet.

When was the Queenie online pokie released?

The Queenie online pokie was released on March 3, 2022.