The stunning popularity of the Marvel movie universe has brought interest in Norse mythology to an all-time high. Odin, Thor, Loki and the Valkyries are among the most commonly searched characters on ... Read Full Review

Play Riches of Midgard: Land and Expand for Free Now! 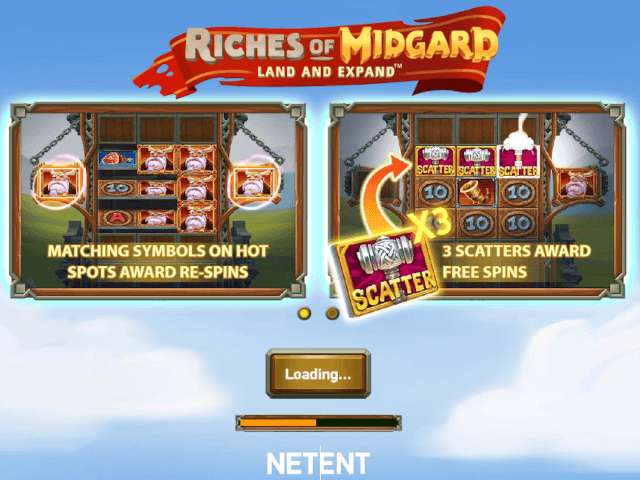 The stunning popularity of the Marvel movie universe has brought interest in Norse mythology to an all-time high. Odin, Thor, Loki and the Valkyries are among the most commonly searched characters on Google. Norse mythology is creeping into every aspect of pop culture, including online gaming. Developers are frequently releasing Norse-themed pokies and NetEnt’s latest Riches of Midgard: Land and Expand online pokie might be the most fun one so far.

This is not your typical pokie that features Ragnarok or a battle between the gods. It’s a much more peaceful pokie with simple gameplay and surprisingly good features that should keep you spinning.

Players at the best pokie sites should also win pretty often. The Riches of Midgard: Land and Expand online pokie is low to medium on the volatility scale. The maximum winning potential isn’t that high, but the pokie is certainly a lot of fun.

Riches of Midgard: Land and Expand Pokie Setup and Controls

The first thing you’ll notice about the Riches of Midgard: Land and Expand online pokie is the unusual layout. It has a 3x3 reel set, but don’t mistake it for a classic pokie with three reels. Those can expand in the free spins round and bring you higher wins.

The reels are set in a wooden frame with cartoonish characters featuring the likes of Odin, Freya, Thor, and other important Norse mythology characters. The Allfather himself pays the most, 15x your stake for three on a line. He is followed by Thor with 7x for the same combination and Freya with 3x. You’ll also find a horn and a huge ham along with stylized card royals.

To the left and right, you’ll see two special pokies with symbols that spin alongside the main reels. Those are called Hot Spot zones and they’re a fun part of the Riches of Midgard: Land and Expand pokie machine. Compare this title to others at PokieSource and see our no deposit bonuses too.

NetEnt online pokie games are famed for their suitability on mobile devices and this is no exception. Riches of Midgard: Land and Expand is fully playable on Android and iOS mobile devices, with a great layout and touch-optimised controls that enhance the experience.

The main feature in the Riches of Midgard: Land and Expand online pokie is the land and expand feature. As the name suggests, certain pokies that land on the reels can expand to increase your payouts. All the features in the pokie are triggered with the help of the Hot Spots zones. Before you get to them, however, you need to set your bet. The options range between 0.10 minimum and 200 maximum coins per spin, solid enough for most players.

When you spin the reels, they will turn along the two Hot Spots to the left and right. These don’t contribute to regular line wins. But if you land identical symbols on them, you’ll get a respin. Only high-paying symbols appear on the Hot Spots in the base game. Triggering symbols will expand to cover a reel and get locked in place, potentially increasing your base game wins.

The pokie’s mechanic allows even non-adjacent reels to pay. Its full winning potential is unlocked in the free spins round, triggered by the scatter. The top pokies deposit bonuses at PokieSource can help you get started.

Thor’s light-crackling Mjolnir hammer unlocks the free spins round. You’ll need three of these to get 8 free spins. During the bonus round, every scatter that lands on the reels adds 2 free spins to your tally and unlocks and additional row on the reels.

A fully unlocked 3x7 grid gives you 29 ways to win. The wild can now land on the Hot Spots, just like all other free spins. There’s plenty of great potential in the bonus round, especially if you play for maximum bets.

The Riches of Midgard: Land and Expand online pokie has an RTP of 96.03% and is of low-medium volatility. You can expect to land wins frequently and win up to 435x your bet, which is pretty low. At that top stake, the maximum payout is 87,000 credits.

Riches of Midgard: Land and Expand is an atypical Norse mythology pokie that can deliver decent wins. Landing symbols that will later expand offer plenty of fun action and the free spins round is really exciting. Play Riches of Midgard: Land and Expand for real money pokies winnings right now and join Thor and Odin on their quest for ancient riches.