The “Book of…” pokie niche that takes place in Egypt seems to be invincible. Every pokie developer has done one or two such pokies, but rarely any studio does it better than ... Read Full Review 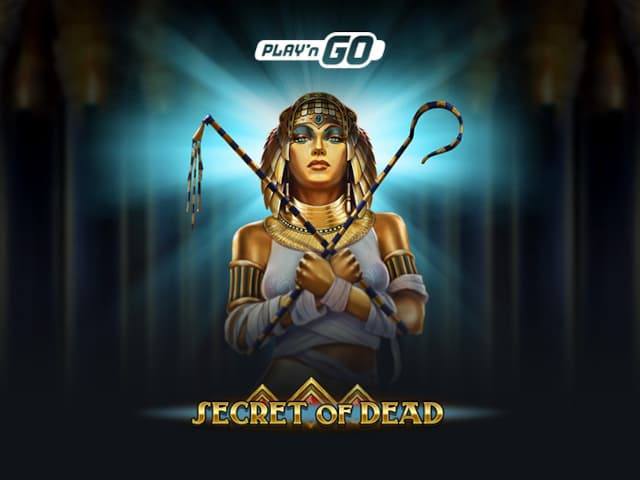 The “Book of…” pokie niche that takes place in Egypt seems to be invincible. Every pokie developer has done one or two such pokies, but rarely any studio does it better than Play’n GO. The original Book of Dead pokie is still popular to this day, but Play’n GO has gone and released a sequel called Secret of Dead that aims to do better than its predecessor.

While it takes a lot of things from its ‘father’, this is still a new pokie with more than a few surprises. It follows the “Book of…” formula while adding a few things on its own, or it revamps features that have been in need of a refresh. It has 10 fixed paylines and an RTP of 96.20% paired with high variance and wins up to 10,000x the bet.

One thing it does differently than its siblings is the addition of a sixth reel. It boosts the winning potential quite a lot and makes things much more interesting. Available for free and real money in any Play’n GO casino, check it out yourself and see if this ancient secret is worth trying a crack at.

The Secret of Dead pokie takes place on a 6x3 grid with 10 fixed betways. It’s your classic Egyptian-themed pokie game with plenty of hieroglyphs and deities on the reels. The Egyptian goddess of fate Shai is one of the premium symbols, paying more than any of the deities. Low-win card royals are here too, stylised as hieroglyphs.

Secret of Dead pairs the best elements of Play’n GO’s earlier releases Book of Dead and Legacy of Dead. Playing the game is very easy thanks to the familiar layout and the pokie’s design. Simply set the coin value and bet and hit the Spin button or use the Autoplay feature to spin the reels automatically.

Instead of a book, the pokie uses the Ankh Symbol as a Scatter and Wild. It can step in to complete winning combinations and trigger the Bonus Round too.

Both visually and in audio terms, the Secret of Dead pokie exceeds expectations. We’ve grown to expect that out of Play'n GO pokies and this one doesn’t disappoint.

Secret of Dead may be set in ancient times, but it was developed on a modern platform. You can spin it on the go on any Android and iOS device without downloading any software or app.

How to Play the Secret of Dead Pokie

Place a bet from $0.01 to $100 and hit the Spin button to start playing. Secret of Dead doesn’t have many special features in the base game, relying on basic Egyptian Symbols to deliver wins one way or another. The royals pay up to 25x your bet, while the premiums can pay up to 500x for five on a line. Of course, the Ankh Wild can step in to help and trigger the Bonus, just like in any other “Book of…” game.

If you’ve played one, you’ve played them all. Of course, the real differences come in the Bonus Round, and that’s the case with Secret of Dead too. We can only say that while the base game isn’t that impressive, those 500x payouts are more than enough to satisfy the tastes of all players.

Three to six Ankhs in the base game will trigger the Bonus Round. You can get 8, 10, 12, or 15 free games and a payout of 1x, 10x, 50x, or 250x the bet depending on the triggering Scatters. Before the slot bonus begins, the game will choose one symbol as the Expanding Symbol. When it hits the reels, it will cover one or more in full, boosting your chances to hit big wins.

Now the difference here is that when you retrigger the round, you get another Expanding Symbol in addition to 5 extra slot free spins. Things are much more different with two Expanding Symbols, allowing you to win higher scores.

The gamble feature is available after each win, possibly doubling them right away. You can gamble your wins five times in a row for a maximum win of 2,500x the bet.

The RTP of the Secret of Dead pokie is set to a solid 96.2%. That’s the average for a highly volatile pokie game like this one that can pay up to 10,000x the bet.

Secret of Dead is another exciting instalment in Play’n GO’s long-running series. It combines the best elements of its predecessors while adding another expanding symbol on retriggers in the Bonus Round.

Let Shai guide you through the labyrinth of symbols where you can win whopping rewards up to 10,000 times your stake. Spin the reels of the Secret of Dead pokie at the best online casinos.

Who released the Secret of Dead online pokie?

The Secret of Dead pokie was developed and released by Play’n GO. It’s one of the top studios in the business that brought you hits such as Book of Dead.

The RTP is set to 96.2%, which is common for highly volatile games and pokies released by the studio.

Is Secret of Dead a highly volatile pokie?

Yes, it is. Expect plenty of dry spells in it, although it’s not extremely volatile. Just keep an eye on your bets and you should do fine.

What does the Ankh Symbol in the Secret of Dead pokie do?

Instead of a regular Book Symbol, Secret of Dead uses an Ankh. The Ankh plays the dual role of a Scatter and Wild and is the key symbol to the biggest wins in the game.

Is there a Free Spins Round in the Secret of Dead pokie?

Yes, there is. You can trigger it with at least three Ankhs. These will also bring you an instant cash prize that ranges between 1x and 250x depending on the triggering Scatters.

Can I play the Secret of Dead pokie on my phone?

Absolutely. The mobile pokie game is available via browsers on Android and iOS devices. No need to download an app or any software to play it on the go.

How to win big in the Secret of Dead pokie?

There’s no special formula to winning big in the Secret of Dead online pokie. You’ll need plenty of luck, of course. We found that the key is two or more Expanding Symbols in the Bonus Round which greatly increases your chances of big wins.

What’s the best casino app to spin the Secret of Dead pokie on the go?

That depends entirely on you. Check out different Play’n GO casinos and their apps to find one that suits your playing style best.

Which pokies are similar to Secret of Dead?

When was the Secret of Dead pokie released?