Sevens High is an interesting fruit pokie game by Quickspin in which Sevens will turn Wild as you get wins on your re-spins! After six consecutive wins, three Seven symbols will be ... Read Full Review 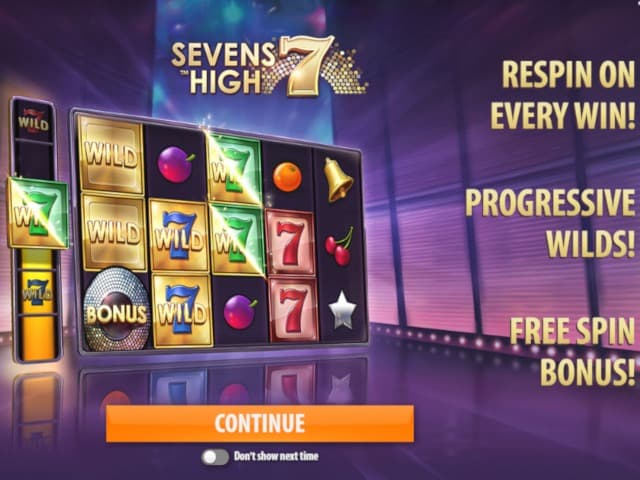 Sevens High is an interesting fruit pokie game by Quickspin in which Sevens will turn Wild as you get wins on your re-spins! After six consecutive wins, three Seven symbols will be Wild and you'll have a chance to win big!

The game has 25 fixed paylines on a 5x3 board, so all pokie players should be more than familiar with the setup, and the only choice you need to make is your bet per spin. There are 13 levels and they start at 0.25 per spin or 0.01 per payline, while the maximum allowed bet per spin is 100.00. After that, you simply click or tap Spin and enjoy the game.

Any winning bet line will activate the Wild Meter and will start the re-spins feature. Whenever you get wins in two consecutive re-spins, one Seven symbol will turn Wild, for a maximum of all three. This actually makes it easier to reach higher levels of the Wild Meter, as with more Wilds it will be more likely you'll get another win on the next re-spin. No symbols are held during the re-spin, so this is effectively a whole new spin that is free. Also, each spin pays separately.

Three Bonus Scatter symbols pay 3x your bet and then start the 10 free spins that can be re-triggered for 10 more if you land the Scatters again. Just like in the main game, every win triggers a re-spin and each two wins on consecutive re-spins will make a Seven symbol Wild, but will also award +2 additional free spins, so this feature can go on for quite some time. Due to the sheer number of spins and re-spins you'll get, it's likely you'll finish the feature with a decent win.

Crucially, in this game Wild Sevens pay much better than normal Sevens, so if you get five-of-a-kind of any Wild or Wild Seven, you'll get a prize of 20x your bet while for the normal Seven the prize would only be 2x. There are two more symbols that pay solid wins, Star and Bell are worth 1.60x your bet, and the four fruit symbols all get you your stake back at best.

It seems that this game's variance isn't too high, it's probably medium as the game often proceeds to the third or fourth re-spin easily, which means you'll get a win that's large enough to cover the losses of previous spins. It's an enjoyable game that doesn't risk your money too much, and can also pay very well if you land many Wilds. Theoretical return to player (RTP) is 96.54%, which is a solid level.

Graphics are not as good as we'd expect from a Quickspin pokie, and fans of fruit machines will be a bit disappointed to see fruit symbols that don't really stand out. The Sevens do, however, as their gold background block makes them both recognizable and pretty, and overall the game has decent graphics but it doesn't bring anything new to the table.

Sevens High is an interesting variation on the most popular theme in pokie machines, as this re-spins feature that makes Sevens turn Wild can end up with you having a full board of Wilds, which would result with a 500x win. That's an exciting proposition, and it's easier to achieve this during the free spins game as you get lots of extra spins. If you're looking for a fruit machine with some special features, Quickspin's own Second Strike and Joker Strike are equally good choices as Sevens High so you might want to look into those as well. Sign up with one of the best online casinos and you'll be able to enjoy all of these games.