When you hear the term snakebite, the first association that pops up in your mind is something slithering and toxic. Regardless of the product, that’s what we all think about when we ... Read Full Review 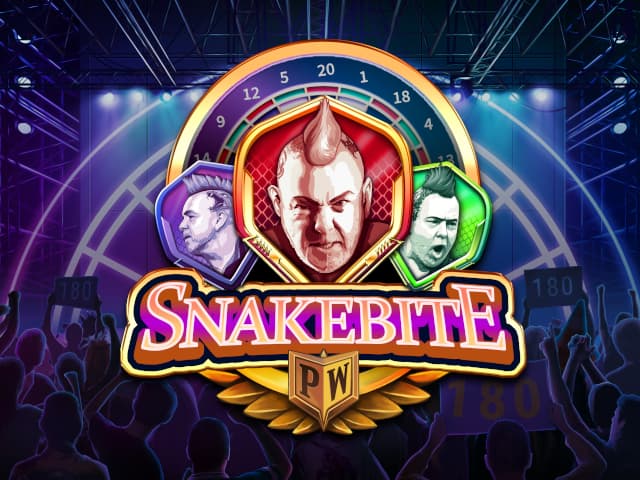 When you hear the term snakebite, the first association that pops up in your mind is something slithering and toxic. Regardless of the product, that’s what we all think about when we hear it. A pokie named Snakebite should probably be full of snakes on the reels and slithering features. However, the latest Play’n GO pokie game is anything but venomous. It’s named after Peter “Snakebite” Wright, a legendary darts player whose nickname comes from the various mohawk hairstyles he wears instead of the drink.

The Snakebite pokie is a darts adventure with plenty of surprises. It has only 10 paylines, but the high RTP and medium variance are more than enough to make up for the lack of ways to win. Of course, the pokie’s all about the darts legend, with plenty of trophies to win on the reels. Of course, you’ll need to hit bullseye shots to do it, but that’s what Wright does, and so will you.

Available in any Play'n GO casino for free or real money, Snakebite is a bullseye of a pokie. Let the darts fly, and with a bit of luck, you’ll hit the right targets on the reels.

The Snakebite pokie has a familiar Play’n GO layout with a 5x3 grid. In terms of design, it’s pretty straightforward. The colourful interface and design are inspired by Snakebite’s mohawk hairstyles invented by his wife. In terms of graphics, it has a kind of urban style to it which we like.

All the controls can be found beneath the reels, just like the bet adjuster. The pokie’s soundtrack goes in line with the action, picking up the heat as you progress. You’ll even hear chants in the background, elevating the experience up a notch.

In terms of symbol payouts, the trophy Wild Scatter pays the most – 200x your stake for five of a kind. The Red Snakebite symbol pays most from the regulars with 24x wins for the same combination.

The Snakebite online pokie is available on all Android and iOS mobile devices, thanks to the HTML5 platform it was built on. You can spin it on the go without downloading any recommended pokie app or third-party software – just play it from your browser.

How to Play the Snakebite Online Pokie?

Ready to hit the bullseye? Before you try your best shot, you should place a bet between $0.10 and $100 per spin. You can then use the Spin or Autospin feature to try and win across the 10 paylines. The base game is pretty straightforward, so you shouldn’t have trouble playing it. Wilds step in to complete winning combos, and a special Peter “Snakebite” Wright can land on the 5th reel.

Dartboards are a big part of the base game experience. This symbol lands on reels 1-4, and together with the Snakebite symbol on reel 5, it can trigger the Bonus Round. If 2 or more dartboards land on the reels with no Snakebite Wild, you get an instant cash award per dartboard.

The trophy Wild Scatter is by far the highest-paying symbol in the pokie. It acts as a Wild and substitutes for other symbols in winning combinations except for the Snakebite special symbol.

The Snake Spins bonus is triggered by at least 2 dartboards and a Special Snakebite symbol on the 5th reel. In this round, the playing area expands to 5x5. By landing instant cash prizes, Snake Snap, and Peter Pays symbols, the number of free spins resets to 3.

The Snake Snap symbol duplicates all instant prizes in sight. If you land the Peter Pays symbol, it will raise the value of all instant cash prizes. During the Bonus Round, you can also collect Golden Darts that raise the Multiplier awards up to x10. With the Multipliers and other special symbols, the winning potential of the Snakebite real money pokie is at its highest in the Bonus Round.

The RTP of the Snakebite pokie is 96.20%, which is typical for Play’n GO pokies and a bit over the average for medium volatile titles. With the highest Multiplier and other features, you can win a total of 6,000x your stake.

If you’re a darts fan or, better yet, a fan of Peter Wright, the Snakebite pokie will surely appeal to you. It’s a bullseye of a pokie complete with fans in the arena chanting the English legend’s name. The action may be pretty straightforward at first, but it can heat up thanks to special Snakebite symbols that can up the ante.

Play the Snakebite pokie for free at the top online casinos before you play for real money and go for the bullseye just like Peter Wright.

Who published the Snakebite online pokie?

The Snakebite pokie was developed and published by Play’n GO. It’s one of the top studios in the industry and has so far released dozens of hits, including the Book of Dead pokie.

The RTP is set to 96.2%, just like most Play’n GO pokie games. It’s a bit higher than the average for a medium variance pokie.

No, Snakebite is a medium volatile pokie game with varied wins. It can offer smaller wins regularly and the occasional big win.

Are there any special symbols in the Snakebite pokie?

Yes, there are. First up is the Special Peter Wright pokie that only appears on the 5th reel. Together with the dartboard that appears on reels 1-4, it can trigger the pokie’s Bonus Round. In the Bonus Round, you get other special symbols, including Peter Pays and Snake Snap.

Does the Snakebite online pokie have the Free Spins Round?

Yes, it does. The Free Spins Round is accessible when two or more dartboards land along with a Special Peter Wright symbol on the last reel. You get 3 free spins, and while you can’t get more, the number resets to 3 every time a special symbol lands on the reels in the Bonus Round.

Can I hit the jackpot in the Snakebite video pokie?

No, the Snakebite pokie doesn’t have a jackpot. However, the maximum win is 6,000x your stake, which is around the average for fixed jackpots.

What does the Peter Pays symbol do?

The Peter Pays symbol is only active in the Free Spins Round. When it lands, it instantly increases the value of all instant cash prizes in sight.

What does the Snake Snap symbol do in the Snakebite pokie?

The Snake Snap symbol triggers the eponymous feature and duplicates all instant prizes on the reels.

Which pokies are similar to Snakebite?

If you’re looking for more darts action, you can go for PDC World Darts Championship by Blueprint Gaming.

When was the Snakebite online pokie released?

The Snakebite online pokie was released on October 21, 2021.