Microgaming has released a new real money pokie developed by All41Studios, following several successful releases. This one, however, bumped into a few problems before it was released since it resembled a lot ... Read Full Review 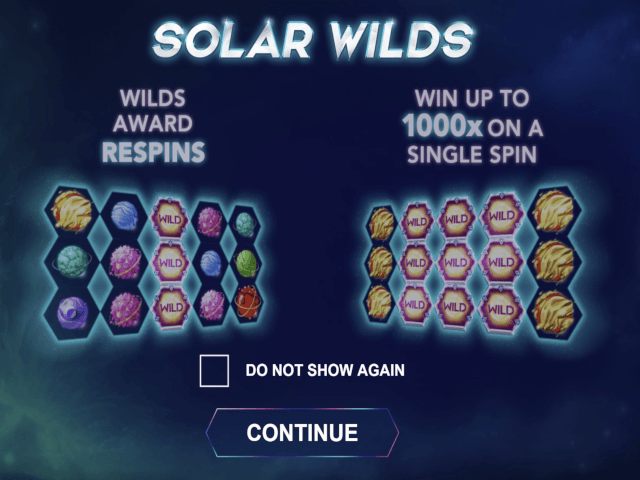 Microgaming has released a new real money pokie developed by All41Studios, following several successful releases. This one, however, bumped into a few problems before it was released since it resembled a lot to NetEnt’s mega-popular Starburst pokie. Initially called Space Enigma, the pokie was eventually rebranded as Solar Wilds.

Solar Wilds is a 5-reel, 10 paylines pokie with medium volatility. It features the familiar space theme, where the Star is the literal star on the reels. This is the Wild that plays a crucial role in the pokie as it can trigger Respins. In terms of payouts, Solar Wilds can deliver 1,000x the stake per spin and arrives with a decent RTP of 96.27%. Add to that the fact that the paylines pay both ways, and you’ve got yourself a winner. Excited to explore the galaxy?

If you’re a fan of Starburst, the minute you load Solar Wilds real money pokie, you’ll feel at home. You’ll notice the similarity right away, and you’ll either be glad for it or annoyed by it. Either way, the vast space is in the background of the transparent reels and the galaxy-inspired symbols.

On the right of the reels, you have the controls. Going bottom to top, you’ll see the Bet Configuration field. The least you can bet is 0.10 credits, while the most 100 credits. The Autospin button is next, followed by the Spin button. The 9-dot icon takes you to the paytable.

As you enter the paytable, you’ll see that the symbols are all gemstones, objects inspired by the galaxy, in purple, green, turquoise, purple and blue colours. The ones in red and yellow are high-paying, giving you 12x and 50x the stakes, respectfully, for their top combos. We need to mention right here that symbols pay both ways in a winning payline, therefore, you’d be able to make winning combos more often. There’s no Scatter in the pokie, however, the Star Wild plays several major roles, which will be explained below.

As you would presume in this age of mobile gaming, Solar Wilds pokie is available on mobile devices. Not only is it available, but it is also optimized to suit smaller screen sizes.

Therefore, whether you prefer playing your pokies at home, on your PC or laptop, or you’d rather take them on the go and play them via your tablet or smartphone, powered by either Android or iOS, you can rest assured that you’ll be able to enjoy Solar Wilds on any device at recommended mobile casinos, as the game won’t lack a thing.

If you’ve played the iconic Starburst pokie, you will not be surprised by the features in Solar Wilds, as they are nearly the same, with All41Studios tweaking them a bit.

In the base game, you will benefit from the Star Wild, which only appears on the middle reels. Naturally, the Wild will substitute for all symbols, with no exception, and help you form winning combos. On its own, the Wild cannot make a winning combo and deliver a payout.

When you land a Wild, it will expand to cover the whole reel it landed on. At the same time, it will trigger a Respin, locking itself in place during the Respin. Regardless of whether you land one or more Wilds in a spin, you will only get 1 Respin.

However, if you land additional Wilds during the Respins, you will get further Respins. This is the only Solar Wilds bonus feature that will take you closer to the biggest wins since the pokie does not feature Scatters or Free Spins.

We compared Solar Wilds to Starburst in many aspects, but this one would be one to consider. Contrary to Starburst with only a 500x the stake payout, Solar Wilds can deliver double that payout.

The max you can win is 1,000x the stake per spin. Translated, that means that if you play the game for the max 100 credits bet, you could win 100,000 credits tops on any spin. This is a nice payout potential, one worth playing the pokie for.

There’s no point denying that All41Studios was heavily influenced by Starburst in terms of visuals. As soon as you load the pokie, you’ll notice that. However, as we mentioned, the studio managed to tweak some things and make the pokie more interesting than the epic title. For starters, it comes with higher volatility; the original is low while the clone is a medium volatile one. The RTP is a bit higher, 96.27% compared to Starburst's 96.10%, and the payout potential is double, 1,000x the stake per spin!

Therefore, if you're a true Starburst fan, you’ll be excited to try Solar Wilds. It is an excellent upgrade to the iconic pokie, so if you’re looking for the same experience with a better payout potential, make sure you give it a try. You’ll greatly enjoy the 100,000 credits per spin payout, should you fill out the screen with the yellow gemstones.

What online pokies are similar to Solar Wilds?

NetEnt’s Starburst is the first title that comes to mind, as evident in our review. However, other similar pokies to Solar Wilds are Play’n GO’s Crystal Sun and Novomatic’s Power Stars.

How do I win on the Solar Wilds pokie?

To get the most out of the Solar Wilds pokie, you would need to play the max bet and land a screen full of yellow gemstones, and you’ll be able to grab the 100,000 credits win per spin.

What is the minimum bet on Solar Wilds?

The minimum bet you can place for the 10 fixed paylines is 0.10 credits, meaning 0.01 credits per line.

Who developed the Solar Wilds pokie?

When was Solar Wilds released?

Does the Star Wild expand every time it lands on a reel?

Yes. The Wild expands whenever it lands on the reels and remains sticky until the reels spin again.

No. Solar Wilds is a regular 5-reel, 10 paylines pokie which does not feature a jackpot prize. The maximum you can win playing it is 1,000x the stake per spin.

Are there any promo codes to use for Solar Wilds to get better wins?

It normally goes for new pokies. Online casinos offer promo codes. However, you would need to stay alert and check out whether any promo codes are available here at pokiesource.co.nz.

Why is the Solar Wilds pokie so popular?

The pokie game was initially supposed to be called Space Enigma and be released earlier in 2021. Still, due to its similarity to Starburst, it needed to be redesigned and renamed Solar Wilds. It became popular due to its resemblance to Starburst and due to the fact that even though that resemblance was uncanny, it still got the green light to be released.

Is Solar Wilds a good game after all?

As a matter of fact, yes. It is a medium volatile pokie with a nice RTP of 96.27%, offering a decent betting range that would appeal to any player, especially Starburst fans. With its 1,000x the stake per spin potential, it is a game that can deliver 100,000 credits per spin should you play it for the max bet.