Sticky Bandits is a Wild West themed pokie by Quickspin that features two Massive Wilds that can fill reels 2 through 5 entirely and are sticky during the free spins game. This ... Read Full Review 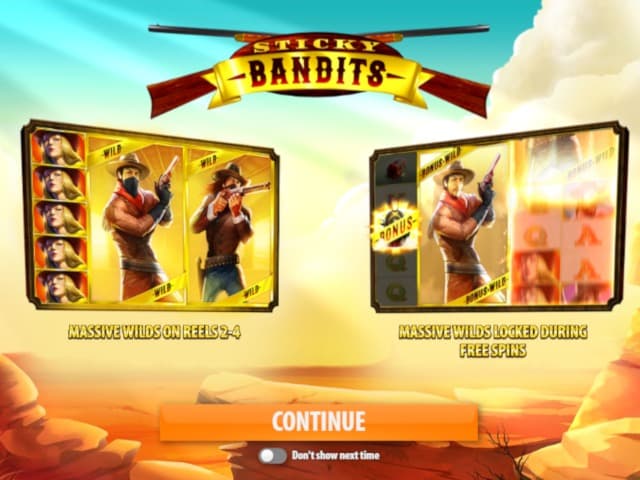 The game is played on a huge 5x5 board with 30 paylines, and bet per spin can range from 0.15 to 90.00, which is a bit different than the Quickspin usual range. Once you set your bet per spin you're good to go, and can only choose to make the game faster by clicking Fast Play or Autoplay. Since the game is so simple to set up, it's very easy to play it at any of the best mobile casinos.

There are nine normal symbols in the paytable, and four of these are low-win card symbols. These can roughly give you your stake back if you land five-of-a-kind, and for lesser wins they'll just give a fraction of the stake back. It doesn't get much better with the next two symbols in the paytable, Dynamite and Gold Bag, as they pay up to 2x your bet, and with three best symbols you can win from 3x to 6x your bet. Again, not that special, but with Quickspin it's usual to have the extra features produce the big wins and not the paytable itself alone.

The game doesn't pay often and even when it does, chances are the win will be 2x or 3x your bet, but the symbols in this game often appear stacked, which means there's a chance to land a full board win when the reels align properly. This is rare, but at least it's another route to a big win. To be more precise, that big win can be 200x your bet at best, in case of the Blonde Cowgirl symbol.

Massive Wilds are 2x5 Wilds that appear on reels 2 and 4, which means two of them will leave only reel 1 uncovered. In addition to this, any position that is Wild at the moment when the free spins feature is triggered will remain Wild for the duration of the feature. To trigger the free spins game, you need a Bonus symbol on reel 1 and a Massive Wild, either the one on reel 2 or the one on reel 4. You'll get 7 free spins with that Massive Wild held. Also, any additional Wild that lands during the feature will also be held until the end.

This means you can easily have almost the entire board covered in Wilds, except for reel 1 which can never have a Wild on it, and then you can go on to have several spins with those Wilds held. This will mean massive wins, the pokie game will keep on paying spin after spin until the feature ends. Sticky Bandits is a pokie game with a great contrast between the main game, which barely pays at all, and the free spins game which can pay ridiculous wins. Theoretical return to player (RTP) is 96.54% so it all evens out to create a pokie game that pays rather well.

Sticky Bandits is a game that will be liked by those players who want the bonus feature to be something amazing while the main game only pays here and there to give you some extra cash for the new spin. Variance is therefore quite high as you need to trigger the free spins game, and land the second Massive Wild early too, in order to get the biggest wins. But the chance of that happening is quite good, so go ahead and choose one of top casinos and play Sticky Bandits for real money.