Top online casinos offering classic pokies never go out of style. That’s why even the biggest developers are fully focused on these pokies. Pragmatic Play isn’t always big on these pokies, but ... Read Full Review 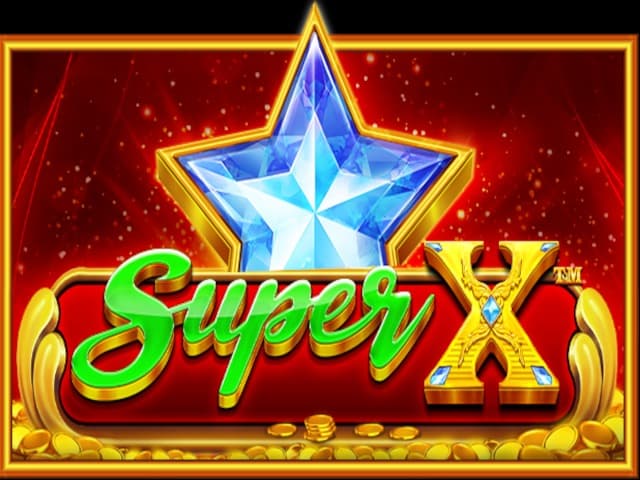 Top online casinos offering classic pokies never go out of style. That’s why even the biggest developers are fully focused on these pokies. Pragmatic Play isn’t always big on these pokies, but from time to time, it can release a classic pokie game. One of the biggest in the developer’s library is surely Classic 7s, a pokie that revolves around sevens released in 2020. It ended up being a huge sleeper hit, and because of that, Pragmatic Play has decided to give it a sequel.

Called Super X, the new pokie mostly follows in its predecessor’s footsteps. Its RTP is a tad higher at 96.56% (compared to the original’s 96.50%), but this time, the number of paylines and the maximum payout is higher. As the name suggests, the pokie revolves around special Xs instead of 7s. Landing these symbols on the first reel can lead to massive payouts thanks to the X Bet Respin feature.

Available for fun and real money in any Pragmatic Play casino, Super X is a great vintage pokie with a twist.

You shouldn’t have trouble spinning the Super X online pokie from any device. As a classic pokie game, it follows a traditional pokie design. You get a 5x3 layout with vintage symbols including stars, bars of gold, diamonds, and the ever-present card royals.

This pokie is all about wealth. The bars of gold on the reels hint at it as do the golden coin stacks in the background. A legacy lever can be seen on the right which is a throwback to times when pokies were simpler and a bit more fun.

The jazzy tunes in the background and Vegas sound effects create familiar vibes that will certainly sit great with Vegas fans.

While it is vintage in nature, the Super X pokie has been developed on the modern HTML5 platform. It allows players to spin it on any Android device or iPhone, with the same familiar setup as you get on a desktop.

Ready to hit those golden reels? Claim the No Deposit Bonus before you spin to win, and then select your bet. The lowest is $0.20 per spin while the largest is $100. Like most Pragmatic Play pokie games, it has a pretty familiar layout and design, so you shouldn’t have trouble playing it.

In the base game, you should cross your fingers to land the highest-paying symbols. Those would be the crown or diamonds in combination with Wilds. There’s only one special feature in the base game, but boy, can it be rewarding.

The feature is called X Bet Respin and is tied to the special X that only lands on the first reel. The blank symbol has no value unless a number lands in it (0-9). Those are used in the X Bet Respins, which is triggered by the X symbol on reel 1.

Whenever you get the respin, all blank symbols are filled with digits from 0 to 9. The X symbols are frozen in place. After each respin, the digits will form a number on each row containing an X. That number spells the number of total bets, so it can be a pretty lucrative figure.

Besides the X Bet Respin, the Super X pokie also has a Bonus Round.

The Free Spins Round is triggered with 3 or more Scatters. The Bonus Round starts with 5 free spins. What makes this feature significant is the fact that it’s played with nothing but X symbols. Blank symbols on reels 2-5 can trigger more free spins.

This is the round where you can hit the maximum possible win which isn’t a pushover in any case.

The RTP of the Super X pokie is pretty high at 96.56%. It’s variable depending on the round. This is a pokie of high variance with a maximum win in the Bonus Round of 9,000x the bet.

Super X pokie is a great sequel for fans of Super 7s. Think of it as a bigger and better pokie than the original. It has more paylines than Super 7s, almost the same RTP and variance, but higher bets too.

While there’s only one feature in the base game, the X Bet Respin is a pretty nice addition. Overall, this is a great pokie for fans of vintage pokie machines that can pay pretty great real money pokie wins.

The Super X pokie game was developed and published by Pragmatic Play. It’s one of the top studios on the market and the one that brought you hits such as Fishin’ Frenzy.

What’s the minimum bet I can place on Super X?

The minimum bet in the Super X pokie goes as low as $0.20 per spin. That’s suitable for new players and those who want to test Super X.

Similar to its predecessor, Super X has an RTP of 96.56%. It tends to vary in the base game and Bonus Round, so don’t expect a flat number.

Does the pokie have a Free Spins Round?

Yes, it does. The Free Spins Round has great winning potential and uses the same special feature you get in the base game.

Can I buy my way into the Bonus Round in Super X?

Yes, players from most jurisdictions can buy their way into the Bonus Round. Keep in mind that this will cost you a pretty penny, so it may be better to try your luck waiting.

Yes, it is, although not extremely volatile. Whatever the case, you should be careful with your bets.

How is the Free Spins Round triggered?

The Free Spins Round in the Super X pokie is triggered by 3 or more Scatters. You get 5 free spins and can earn more as long as blanks land on reels 2-5.

The maximum possible win you can hit in the Bonus Round is 9,000x the bet. Of course, you’ll need plenty of luck to get it, as those kinds of wins don’t land on every spin.

How does the X Bet Respin feature work?

The X Bet Respin feature is tied to the special X symbol on the first reel. It awards a respin with blanks and digits that land in them which indicate the total award you get.

When was the Super X online pokie released?