Nolimit City is back to its nudging ways of big-win pokies with Tombstone R.I.P. An ominous-sounding pokie game with plenty of surprises, Tombstone R.I.P actually sticks to a wild west theme. It’s ... Read Full Review 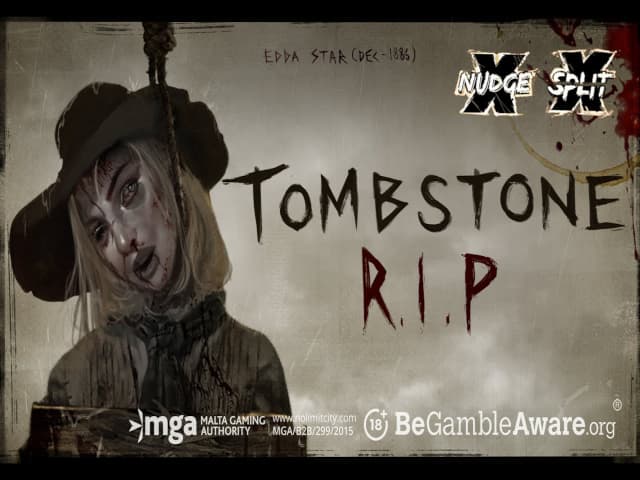 Nolimit City is back to its nudging ways of big-win pokies with Tombstone R.I.P. An ominous-sounding pokie game with plenty of surprises, Tombstone R.I.P actually sticks to a wild west theme. It’s a story about cowboys and sheriffs in a brutal war with guns blazing from all sides. The pokie’s a sequel to the original Tombstone from 2019 which helped make NLC’s name known.

This time, the R.I.P sequel brings the same number of betways but updated winning potential. The RTP has been lowered a bit to 96.08%, but it doesn’t impact the winning possibilities. The wild west showdown is riddled with great winning opportunities thanks to the studio’s well-known xNudge and xWays modifiers in this gritty sequel of the Tombstone pokie.

Available for free, real money, or with a bonus in any Nolimit City pokies casino, Tombstone R.I.P is a pokie that’ll blow your hat off.

The Tombstone R.I.P pokie has appealing visuals with a much darker tone than the original. That’s probably because of the R.I.P in the name which doesn’t imply a happy end for the characters. Nolimit City has nailed the vibes of the pokie, putting the 5 reels against a bleak landscape in a town in the middle of nowhere.

You’ll find various characters on the reels with portraits that can make it on their tombstones when they’re shot up. There are 5 reels, but the setup can be described as 2-3-3-3-1. This grid comes with 108 ways to win, so you can guess how easily wins are formed. In terms of symbols, El Gordo pays the most at 4x for five on a line. He’s followed by Edda Star with 3x and Skinny Joe with 2.50x. There are two other character symbols as well as 5 low-win card royals.

The bleak visuals are accompanied by an equally great soundtrack that immerses players into the wild west world of death.

The studio developed the Tombstone R.I.P online pokie on the HTML5 platform, making it available on a range of mobile devices at the best new pokie sites. You can play it on your Android and iOS devices straight from a browser instead of downloading an app.

The guns-blazing action begins when you place a bet. Your options go between $0.10 and $50 per spin, suitable enough for most players. You start shooting with the Spin button hoping to get those outlaws the tombstones they deserve.

Nolimit City graces its pokies with more than a few special mechanics, and Tombstone R.I.P hasn’t been left out in that regard. What’s cool is that when you fire the pokie up, there will be a question you need to answer correctly to enter the game. It’s a random question with an obvious answer, so you won’t botch it.

The first four reels in Tombstone R.I.P are regular, while the fifth one has special properties and limited symbols. For example, all symbols on it count double, there are no low-win symbols, and it holds specific symbols only during the special Bonus rounds.

Every time a Stacked Wild lands on the reels it will nudge to cover them thanks to the xNudge feature. These creepy Stacked Wilds show the main characters hanging off a noose. Every nudge raises the Multiplier by +1, and several Wild Multipliers can be combined for a total payout. These symbols land on the middle reels only.

There’s another feature in the base game called xRIP that brings nothing as expected. It’s a random feature that generates combinations that pay absolutely nothing.

There are two types of Scatters in the Tombstone R.I.P pokie that trigger different Free Spins rounds.

Triggered by 3 or more Hang ‘Em High Scatters. You get 8 free spins bonus shots with the Win Multiplier increased by regular Wilds, Reel Split Wilds, xSplit Wilds, and xNudge Wilds. Every time they land on the reels, they stick to them. Landing a Boothill Scatter on the last reel will give you 2 extra spins and upgrade the round to Boothill spins.

3 Hang ‘Em High Scatters plus a Boothill Scatter give you 10 Boothill free spins. The Winning Multiplier in this round is increased by the same special symbols as in the Hang ‘Em high Bonus round. On any spin, a Cowboy that lands on the last reel can turn all symbols of its type to Wilds. A random Multiplier between x5 and x999 can be applied to a random Cowboy.
18+ only. Terms and conditions apply. Click Play Now for more details

The RTP of the Tombstone R.I.P pokie is 96.08% which looks a bit low for a highly volatile title. However, keep in mind that it has numerous special features and symbols that can pay up to 300,000x your bet.

Tombstone R.I.P looks like another classic by Nolimit City. We’re always impressed by the developer’s new pokie games that combine frantic and high-paced gameplay with stunning winning potential. Tombstone R.I.P has the studio’s fingerprints all over it, giving you a chance to win up to 300,000x your stake. That’s progressive jackpot territory but with much better chances.

Try your luck in this gun-touting adventure now at the best online pokie casinos and hang the outlaws high to get the bounty.

Who developed the Tombstone R.I.P pokie?

The Tombstone R.I.P pokie was developed by Nolimit City. It’s the same studio that published the original Tombstone and hits such as Punk Rocker and Mental.

What’s the minimum bet I can place on the Tombstone R.I.P pokie game?

The minimum bet you can place on this pokie is just $0.10 per spin.

Can I play the Tombstone R.I.P pokie for free?

Yes, you can. The Tombstone R.I.P pokie demo is available in all Nolimit City casinos.

Is there a promo code I can redeem on the Tombstone R.I.P pokie?

No, we have no promo code to redeem on the Tombstone R.I.P pokie at the moment. There might be one you could use in the future, though, so keep checking our website.

How does the xNudge feature work in the Tombstone R.I.P online pokie?

The xNudge is a popular feature in all Nolimit City’s pokies. Whenever a Wild lands on the specified reels, it will always nudge to cover it, giving you more opportunities to win.

Does the Tombstone R.I.P pokie have a jackpot?

No, it doesn’t. However, thanks to the sky-high winning potential, it doesn’t even need one.

Is there a Free Spins Round in the Tombstone R.I.P pokie?

Yes, as a matter of fact, there are 2. The first, Hang ‘Em High, is triggered by 3 regular Scatters and you need the second type of Scatter to trigger the Boothills round.

The maximum projected winning potential of the Tombstone R.I.P pokie is 300,000x your stake, much higher than any NLC pokie so far.

Which pokies are similar to Tombstone R.I.P?

The original Tombstone pokie is pretty much similar to the sequel. You can also try Mental or East Coast vs. West Coast if you’re looking for more NLC pokie games.

When was the Tombstone R.I.P pokie released?