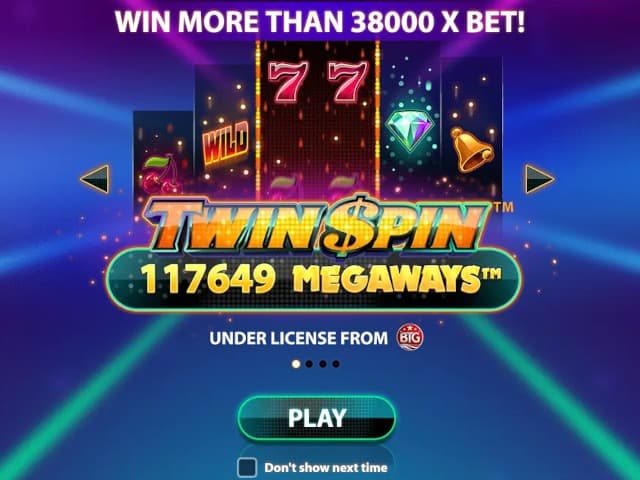 NetEnt’s Twin Spin pokie was one of the biggest hits for the Swedish developer. Released back in 2013, it dazzled with 243 ways to win in both directions and a top reward over 1,000 times your stake. The studio has just made the Twin Spin pokie bigger and better with Twin Spin Megaways.

An exciting new NetEnt pokie with 117,649 paylines, Twin Spin Megaways promises a lot of fun. The pokie uses the Megaways mechanic from Big Time Gaming to deliver massive wins. While its RTP is pretty average and the volatility is medium to high, the pokie has great winning potential and is suitable for all players.

If you’d like to try a revised and improved version of the classic, try the Twin Spin Megaways pokie for real money to hopefully win big.

The Twin Spin Megaways pokie has 6 reels based on the Megaways mechanic. These pokies have a unique random reel multiplier that varies the symbol height on each spin. Thanks to this, the number of paylines expands on every spin and makes the game super-unpredictable and fun.

Twin Spin Megaways is a perfect mix of the old with the new. The pokie game features straightforward vintage gameplay but in a modern setting. You have six reels in five rows with classic pokie symbols splashed across them. The visuals are pretty clean and sharp which is the case with most NetEnt titles.

The diamond is the most rewarding symbol, paying 10x your stake for six on a line. Card royals are among the symbols, delivering low-payouts.

NetEnt is a mobile first developer, so you can expect the Twin Spin Megaways pokie to perform flawlessly on Android and iOS mobile devices.

Give it a spin on your smartphone and tablet and you can win big anytime and anywhere.

Before you start turning the reels of the Twin Spin Megaways online pokie, you need to set your bet. The “bidding” starts at 0.20 coins and goes all the way up to 200 per spin. Set what you’re comfortable with and hit the Spin button to start the action.

The base game makes great use of the Avalanche feature. On each winning spin, the winning symbols are replaced with new ones, potentially leading to new win combos. The avalanche will continue as long as no winning symbols appear.

NetEnt has taken most of the elements from the original Twin Spin pokie and upgraded them for a more fun experience. There are a total possible 117,649 paylines depending on how lucky you are. With each spin, the number of paylines will expand and give you more chances to win.

On each spin in the base game, the Twin Reel feature might come into play. It will lock two or more adjacent reels with same symbols splashed across them. If you get the total of 5 twinned reels, they will all display the same symbols and boost your chances to form winning combinations greatly. With the Avalanche feature active too, you can win a pretty penny in the base game.

The free spins round is triggered traditionally with scatters. You need five anywhere on the reels to get 15 free spins. For any additional scatter on the reels, you get an extra spin.

Start the round and you’ll have both base game features active throughout it. Wild multipliers will join in on the action, appearing on all reels except the first one. These can double or triple your payouts, so things can get pretty lucrative during your extra spins.

At the same time, the Twin Reels will stay expanded to the maximum of seven symbols and give you even more active Megaways lines. Activate a maximum of five twinned reels, and you’ll play at 117,649 betways.

The Twin Spin Megaways pokie RTP may be lower than average at 96.04%, but it’s still a high-paying pokie. Its maximum winning potential is 38,000x your bet which can be unlocked during the free spins round.

Keep in mind that this is a medium-high volatility pokie that can burn through your bankroll if you’re not careful.

The Twin Spin Megaways pokie is the sequel to a classic we’ve all been waiting for. It uses the best elements from the original and adds new fun features that make it a great hit with players. If you loved the original Twin Spin pokie, you’ll love the Megaways update.

Try it for real money right now and you can hit the top reward in the free spins round and leave with your pockets full to the brim. Check out our recommended online casinos before deciding where to play.