If epic battlefields and ancient history are your bags, you're sure to get on well with the Valkyries online pokie. You'll be transported into the Norse wastelands, where the Valkyries await the ... Read Full Review 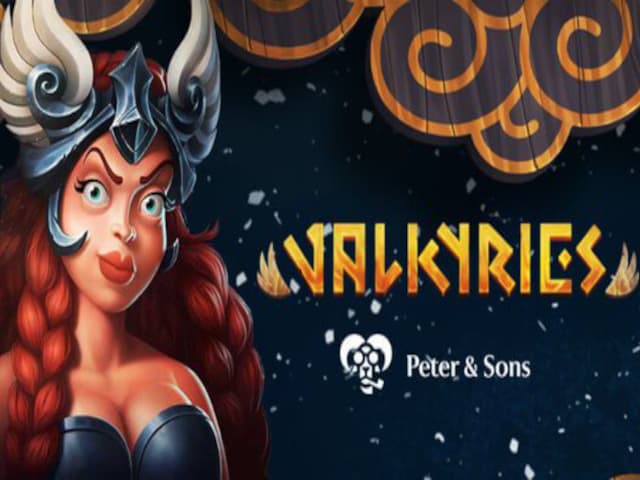 If epic battlefields and ancient history are your bags, you're sure to get on well with the Valkyries online pokie. You'll be transported into the Norse wastelands, where the Valkyries await the Vikings fated to fall in battle. As the name of this pokie suggests, the game focuses on the mythological maids of Odin who had the power to choose who would live or die in battle, then guide them to their master in Valhalla – clever, hey?

You'll find the Valkyries pokie is playable across a host of web browsers via desktop. It's also fully responsive on mobile and tablet devices, regardless of your operating systems or screen sizes.

From the moment you load the game screen, the Valkyries pokie is easy to grasp. You'll see the 5x3 reels immediately in the centre of the screen and all the help buttons you could wish for beneath them. The reels are designed to look like they're in the heart of theatre production – and we can assure you there's plenty of theatre on the reels here.

If you're firing up the Valkyries pokie using a web browser, the bottom left button displays the game rules, as well as the paytable and paylines. This means you can easily access the rules and small print if you're confused by a specific outcome on the reels.

A clever trick to discover the value of each base game symbol is to click the symbols as they land on your reels. It will display the value, even if it doesn't align with other matching symbols.

The lowest stake you can play per spin is 0.10 credits, while the max is 50. It's possible to set your bet per spin before you play or change it before each spin by clicking on the bet in the bottom right corner.

It's helpful to see your balance, winnings, and bet amount as you play, to keep track of your outgoings and incomings before spinning again.

The base game symbols include the Bonus icon, the Viking King, the Valkyries, one with a red crown and one with a blue crown, and the classic icons from a deck of cards.

There are also Scatters, two of which activate the Wild Spins and the Power Reel, and three of which win you 10 free spins with the (almighty) Power Reel.

As with most best Yggdrasil pokies designed by Peter & Sons, Valkyries boasts highly intricate and engaging visuals and animations that stay true to the Norse theme.

If you're someone that enjoys casual pokie gaming when you're out and about or on the pre or post-work commute, Valkyries offers a flawless mobile pokie experience on iOS and Android-powered devices. The clever minds at Peter & Sons and Yggdrasil have ensured this title is fully responsive for browser-based gameplay too on mobile browsers such as Safari, Google Chrome, and more.

Whenever you land two or three Scatters on the reels, the Power Reel comes into play. The Power Reel adds Dropping Wilds, Locking Wilds, and re-triggers to the game.

Dropping Wilds drop down one row per spin, while Locking Wilds stay in the same place for subsequent spins. If any of these Wilds overlap, their multipliers are added together. This creates ample opportunities for you to maximise your payouts should they fill an entire payline.

Two Scatters also trigger the Wild Respin feature, which spins the pokies until the Dropping Wilds are out of the picture. Three Scatters trigger 10 free spins which include the Power Reel for additional opportunities for Wilds to appear, so there are plenty of opportunities to reap the rewards playing the Valkyries real money online pokie.

The maximum payout is a hefty 20,000x your initial bet. The bonus features have the potential to trigger the maximum win, including the Power Reel, as we mentioned earlier. The RTP of this highly volatile online pokie is 96%.

On the whole, we think you'll find the Valkyries pokie game visually pleasing. Its clever animation style and simple layout and controls make it easy to engage with. The reel set and symbols come to life rather than standing still, which makes the game pretty immersive.

On the flip side, you may consider the gameplay itself to leave you wanting more. It doesn't quite have the bells and whistles of a Megaways or Infinity Reels pokie, which may be better suited if you prefer pokies to have an ever-changing, endless feel.

Nevertheless, Valkyries' fixed number of reels, paylines, and multipliers is like a cosy comfort blanket. What you see is what you get. It's easy to understand and the theme is familiar, allowing you to get started pronto at one of the best online pokie sites you can find on PokieSource.

Who is the developer of the Valkyries pokie?

The Valkyries pokie game was developed by Peter & Sons and published by Yggdrasil, a company that has been active since 2013.

What is the maximum available payout in the Valkyries pokie?

The maximum payout is 20,000x your stake. There are no progressive or random jackpots in this game, so this number will remain the top potential jackpot.

How many paylines does the Valkyries pokie have?

There are 10 paylines in the Valkyries pokie game.

What base game pokie symbols are on the reels of Valkyries pokie?

The base game symbols in the Valkyries pokie game are the Bonus icon, the Viking King, six Valkyries, including one with a red crown and one with a blue crown, and the classic icons from a deck of cards. The symbols you match change the potential payout you receive, with the Bonus icon and crowned Valkyries having the highest values.

Is Valkyries a Megaways pokie?

The Valkyries pokie game is not a Megaways pokie, meaning there are a fixed number of symbols on each reel. This means there may not be as many ways to win as with a Megaways pokie.

Can I play the Valkyries pokie game on my mobile?

Yes, the Valkyries pokie game is supported by iOS and Android, as well as Safari, Firefox, Internet Explorer, and Google Chrome browsers, so you can play the game on a smartphone.

What online pokies look and feel similar to the Valkyries pokie?

Nordic themes are fairly common in pokie games, including the Vikings pokie game by NetEnt. However, this game is based on the TV show and is, therefore, more graphically “realistic”, as opposed to Valkyries' cartoon-style characters. Odin Infinity, Thunderstruck II, Vikings of Fortune, and Thor's Treasures are just a few other pokie games with similar themes to the Valkyries pokie game.

When was the Valkyries pokie released?

Yggdrasil released the Valkyries pokie game in December 2021, so it's relatively recent compared to many of the classic and well-known online pokie games.

There's no need to download the Valkyries pokie to play. As mentioned above, the game is suitable for various browsers, and so it's possible for you to play it without downloading it.