Valley of the Gods 2 Pokie

One of the most popular pokie studios in the industry, Yggdrasil Gaming, has developed a slew of big hits. The Valley of the Gods online pokie stands among the best in the ... Read Full Review

Play Valley of the Gods 2 for Free Now!

Yggdrasil - Valley of the Gods 2 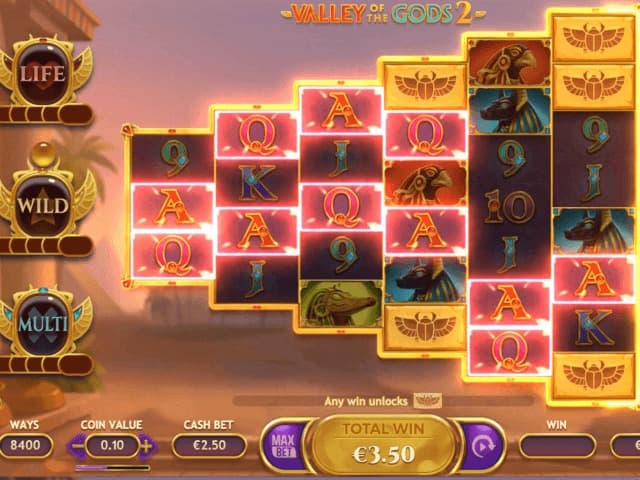 Valley of the Gods 2 Review

One of the most popular pokie studios in the industry, Yggdrasil Gaming, has developed a slew of big hits. The Valley of the Gods online pokie stands among the best in the studio’s library. The 2017 release has made thousands of players richer thanks to its memorable high-paying features. In 2020, Yggdrasil has released a sequel: Valley of the Gods 2.

The Valley of the Gods 2 online pokie keeps all the fun features of the original and adds a few new tricks. Its graphics are even more impressive than its predecessor. It follows the Valley of the Gods pokie right where it ended, continuing the ancient Egyptian adventure in a lost desert landscape.

You can play this Yggdrasil online pokie game for free, but playing the Valley of the Gods 2 makes more sense as a real money pokies entry thanks to the top cash reward worth 6,423x your bet.

Valley of the Gods 2 Pokie Paytable and Setup

Valley of the Gods 2 has simple and proven gameplay mechanics yet adds layers of fun over its predecessor. It has an ancient Egyptian theme so you most likely know what it looks like. The reels are set against sand dunes and what looks like an Egyptian temple. There are six reels with a total of 33 symbol positions.

The Valley of the Gods 2 pokie starts with 240 paylines. That number can expand to 20,160, giving you plenty of chances to win. The reels are populated by scarabs and Egyptian deities, common for this type of pokie.

Check the paytable to see what each symbol pays. Bastet (the cat) pays 400x your bet for five-of-a-kind; the other deities pay less. All of the action is followed by perfect sound effects and a tranquil Middle-Eastern tune in the background that will soothe your senses.

Valley of the Gods 2 Mobile Pokie

Yggdrasil Gaming is a mobile-first developer, so it’s no wonder that the Valley of the Gods 2 video pokie was made with mobile devices in mind, just like most games from online pokies game providers these days. You can play it across a wide range of Android and iOS devices. No matter if it’s a smartphone or tablet, the pokie works seamlessly across all screen sizes.

How to Play the Valley of the Gods 2 Pokie Machine

It might look unusual, but Valley of the Gods 2 can appeal to newcomers at the best pokie sites. The first thing you need to do is set your bet – you can choose from 0.10 to 100 credits per spin. When you spin the reels, you’ll see that some symbol positions are covered by blocker scarabs. All winning symbols give scarabs which destroy the blockers and unlock more ways to win.

You will also get a respin on each win, which could lead to successive wins. The default number of paylines is 240 ways to win. As you destroy the blockers, it will gradually increase all the way up to 20,160. Unfortunately, the blockers come back to their respective places when the wins stop.

If you’re lucky and land consecutive respins that destroy all blockers, you will activate the Scarab Collection feature and the three bonus meters to the left.

The Valley of the Gods 2 pokie doesn’t have a typical free spins round. Instead, it’s all about the crazy combinations as you destroy blockers along the way. Once they’re all destroyed, all winning symbols will instead go to the bonus meters.

If you land 5 golden scarabs, a randomly wild reel will be placed between the others. It will remain sticky until you run out of respins or it’s a part of a win combo.

The last feature is a win multiplier that goes up by 1 when you collect 5 blue scarabs. The multiplier is applied to the next respin and there’s no cap on it.

The Valley of the Gods 2 online pokie has an RTP of 96.3%, a bit higher than its predecessor. The volatility is medium to high, so make sure to keep your bankroll in check. If you’re lucky, the special features can land you a top reward of 6,423x your bet. Compare this to hundreds of other games at PokieSource and learn about our no deposit bonuses as well.

Three years after the original, Yggdrasil Gaming has another hit in Valley of the Gods 2. It’s a great pokie with simple, yet lucrative gameplay mechanics that offer crazy-fun gameplay. The game lacks a bonus feature, but special features can lead to big winning combinations in the base game. Play the Valley of the Gods 2 pokie for real money to unlock Egypt’s mysteries. Big wins feel even bigger if you learn about our best pokies bonuses at Pokiesource before playing.