Yggdrasil, the world’s leader in online pokies development, has launched a brand new title developed via its YG Masters program, in collaboration with TrueLab. The studio has already released two other pokies ... Read Full Review 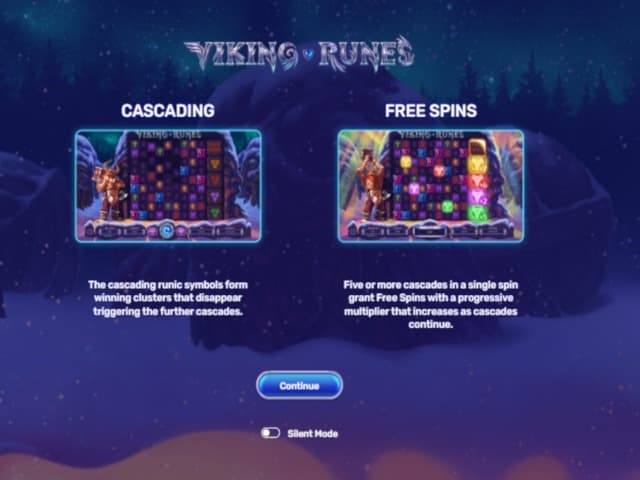 Yggdrasil, the world’s leader in online pokies development, has launched a brand new title developed via its YG Masters program, in collaboration with TrueLab. The studio has already released two other pokies in the program, Victoria Wild and Christmas Tree, but Viking Runes looks like its most powerful release so far.

With an obvious Norse theme, Viking Runes is a Cluster-Pays, 9x9 grid pokie, with high volatility and massive payout potential of 25,000x. The highly engaging gameplay, filled with rewarding features like Lightning Wilds, Runic Shuffle, Spell of Ancestors and Viking Sorcery make winning clusters land more often, and the cascades allow for consecutive wins. Ready to hop on an adventure with the Nordic warriors?

The Northern lights, the Aurora Borealis cover the background the minute you load Viking Runes. You can see the snow falling aggressively all across the reels, and the mighty Viking with his war hammer on the left of the reels, guarding them. On the right, you see the Free Spins counter and the Lightning Wilds in four colours placed under.

When you click on the tiny “-“ button found below the reels, on the far left, you will find the game’s Settings, Paytable, Speaker and Rules buttons. Click on the Paytable button and you’ll see the symbols. They are each presented with some ancient letters from the Nordic runes and deliver prizes from 200x the bet to 1,600x the bet for their top winning clusters. 6 or more identical symbols need to land in a cluster in order to deliver a win. A regular Wild appears, as well as the four mentioned Lightning Wilds.

Going right below the reels, you will see the Bet Configuration field. The bet level when playing for real money can be anywhere from 1 to 15, while the total bet from 0.40 to 40 credits. Next is the Max Bet button, followed by the Play and Autoplay buttons. The Win and Balance displays are at the far right.

Whether you enjoy playing pokies on your mobile device, in landscape or portrait mode, or you prefer playing them on your desktop device, you should know that Viking Runes is a pokie playable across all kinds of devices.

iOS and Android smartphones and tablets, laptops and PCs are equally suited for you to play the game. But the pokie is specifically optimized for mobile devices and suited for smaller screens, so you can take it on the go with you and enjoy it wherever you are, as long as you're connected to the internet.

Much of the action in the Viking Runes pokie happens in the base game. You have the regular Wilds which substitute for all symbols except the Lightning Wilds.

The Lightning Wilds, however, have the main role. When you trigger a winning cascade, one of the four Lightning Wilds gets activated and randomly placed on the grid. In a sequence, you can get up to 4 Lightning Wilds, moving to a different position on the grid with each cascade. When no more cascades occur in a spin, they are removed from the grid for the next spin.

There are three random modifiers, which can be activated both in the base and the bonus round. When the winning cascades end in a spin, the Viking Sorcery may get activated and add 3 to 9 Wilds at random on the grid. When Spell of Ancestor is activated, it will transform low-paying symbols into high-paying ones. And when the Runic Shuffle is activated, it reshuffles the symbols on the grid to guarantee one or more winning cascades.

The Viking Runes bonus is not triggered the usual way with Scatters. Since there are no Scatters in the game, the Free Spins are triggered when you get 5 consecutive winning cascades. You get 6 Free Spins during which all 4 Lightning Wilds start appearing on the grid.

However, during the Free Spins, these Lightning Wilds appear with a Progressive Multiplier which increases by +1 whenever you land a winning cluster. The Free Spins are not retriggerable.

As pointed out at the very beginning, the maximum payout Viking Runes real money pokie can deliver is 25,000x the stake.

The max bet in the pokie is 40 credits, meaning should you place it and scoop the 25,000x the stake prize, you would actually scoop 1 million credits! That’s right, Viking Runes online pokie can make you a millionaire, just like that!

Viking Runes is neither the first nor the last Norse-themed pokie released by Yggdrasil. However, it is a special one, as it can deliver a staggering payout of 1 million credits, should you play through all the features and have luck on your side. It might be inspired by Viking Runecraft, however, its payout potential and gameplay are more powerful. Therefore, if you haven’t tried it yet, make sure you do the first chance you get. You’ll see that the game is suited for any type of player, due to the low max bet and the massive payout potential.

It may seem unclear who created the Viking Runes pokie because we mentioned Yggdrasil, YG Masters and TrueLab. You should know that Yggdrasil’s YG Masters program supports smaller studios in the development and global distribution of their games. That means that the pokie was developed by TrueLab but powered and released by Yggdrasil.

No. Viking Runes is a regular online pokie with a 9x9 grid and Cluster-Pays mechanics. Even though it offers cascade-based wins, it does not feature the Megaways mechanics, therefore, it is not a Megaways pokie.

What is the RTP in the Viking Runes pokie?

Definitely! It is a pokie with a massive payout potential, but it also offers feature-packed and exciting gameplay and is suited for any type of player.

Does the Viking Runes pokie have Free Spins triggered with Scatter symbols?

Viking Runes does have a Free Spins bonus round, however, it is not triggered by landing 3 or more Scatters as the case is with most pokies. To trigger the Free Spins, you would have to land at least 5 consecutive winning cascades.

Are there any special symbols present in the Viking Runes pokie?

The Lightning Wilds are the only special symbols in the pokie, aside from the regular Wilds. The pokie does not offer Bonus or Scatter symbols, but the Lightning Wilds play a crucial role both in the base and the bonus game.

Yes. Viking Runes is a highly volatile pokie. Its volatility is measured at “2065”, which may not mean a lot to you, but means that the pokie is very high on the volatility meter.

How many paylines does the Viking Runes pokie have?

The pokie does not have paylines since it is based on the Cluster-Pays mechanics. You need to land symbols in clusters in order to get a win and get paid.

Does the Viking Runes pokie offer a random or a progressive jackpot?

There’s no jackpot prize pool attached to the pokie. However, its payout potential is so big that if you hit the max payout, you could say that you’ve hit the jackpot. Seriously, for a game that offers up to 1 million credits, it is fair to say that it is a game with a jackpot-like prize.

When is Viking Runes’ release date?

The pokie has already been released by Yggdrasil on the 15th of March, so you can already try it out across all Yggdrasil-powered online casinos.