Have you ever won a dream holiday that let you enjoy a jet-set lifestyle (even for just a couple of weeks)? "Pigs might fly!" we hear you cry! Well, they most certainly ... Read Full Review 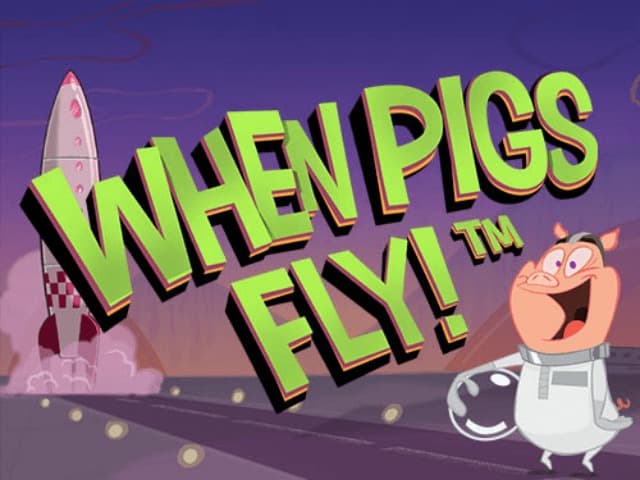 Have you ever won a dream holiday that let you enjoy a jet-set lifestyle (even for just a couple of weeks)? "Pigs might fly!" we hear you cry! Well, they most certainly do in the When Pigs Fly! pokie, a quirky and hilarious 2016 release from NetEnt that features 3,125 ways to win via bonuses. Our pokie review guide reveals whether this might be the game to bring home the best bacon!

About When Pigs Fly! Pokie Game

Most of us remember those happy childhood days of flicking on the television on a Saturday morning and having our eyes metaphorically glued to the cartoons. Well, NetEnt clearly hasn't forgotten either, since the When Pigs Fly! online pokie machine brings back that feeling with oh-so-retro cartoon graphics and in-game animations. And there's more than a hint that the game was inspired by The Jetsons... The pokie features pigs in space, with symbols including the When Pigs Fly! logo, piggy space helmets, female flyers, space balloons, cherry flying helmets and piggy wilds, as well as the classic fruit machine BAR's, A, K, Q, J and 10.

The inventive five-reel, five-row format enables good win potential in the base game, while the bonuses can lead to 3,125 pay-out chances. The game comes with a 97% return-to-player ratio, giving a fair level of payback, even if lady luck isn't gracing you with her brightest smile.

Net Entertainment has engineered the When Pigs Fly! online pokie machine with a wide range of betting options, with all paylines playable from 0.50 to 100.00 per spin. The base game pays out for three to five icons on an active line, with the When Pigs Fly! sign being the game's hottest property. Five of these will reward you with a porky pay-out of 1,000-times your line stake. The pokie's other base game pay-outs range from times-five for three letters, to times-500 for five piggy space helmets. The game can be played manually or set on fire with auto-spins, whether you're playing via laptop, PC or mobile.

The re-spin bonus is a cool feature in the When Pigs Fly! video pokie, opening up a huge number of potential winning combinations. The re-spin is awarded when you land a winning combo, causing an explosion on the reels that reveals two new symbols. You can roll over the re-spin bonus up to five times, with progressively more and more potential ways to win:

However, these pigs really do fly, so there's more to come if you manage to hit a win on the fifth re-spin. Getting lucky rewards you with eight free spins and an expanded five reels and five rows. This means you get 3,125 ways to win and could enjoy up to 962-times your spin stake!

With the When Pigs Fly! pokie, Net Entertainment has produced another game that's a true pleasure to play. It's an online pokie with innovative and fun features that will please many punters.