The Wilhelm Tell online pokie by Yggdrasil looks pretty ordinary at first. Just 20 paylines, no exploding reels or insane graphics, a soothing classical music soundtrack. But once you start to get ... Read Full Review 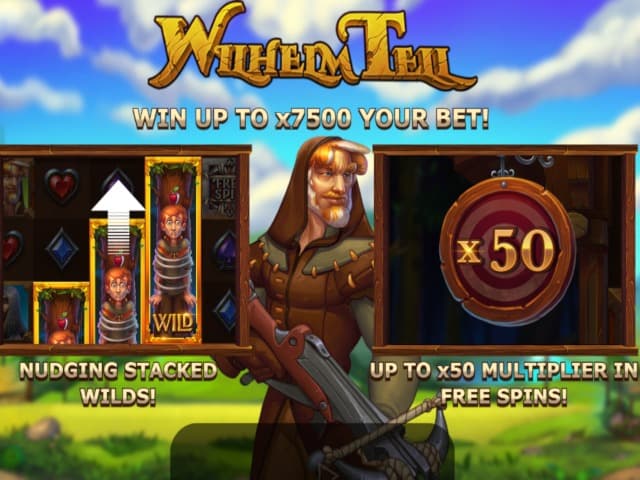 But once you start to get into it, Wilhelm Tell has something to offer for players on all levels. The poor boy tied to a tree with an apple on his head – the son of Wilhelm Tell, as Yggdrasil describes it – means stacked wilds in a reel and those can add up quickly. The lilting music gets more urgent and is punctuated with modern beeps and blips when you hit a jackpot.

And most of all, you control how crazy you want to get with your multipliers when you get free spins – we’ll get to that later in this review of the Wilhelm Tell online pokie.

This game has a classic 5x3 setup. With 20 paylines, only paying left to right, it’s pretty standard for anyone familiar with playing online pokies for real money.

Click on the plus sign on the bottom left of the screen to open a toolbar. Once there, click the “I” button to access the paytable as well as an explanation of the Wilds, Free Spins and paylines. After the “i” button the next button to the right on the toolbar gives you access to the game’s settings, including autoplay. The other buttons are to read the rules and to control the volume. Change your bet by clicking on the buttons next to the coin value, either plus or minus.

The other symbols include Wilhelm Tell himself, a knight and Tell’s enemy, Gessler (he pays out the most amongst the regular symbols). From there you have the standard card suits. Hearts pay out the most (up to 50 coins for five in a row) followed by spades, diamonds and clubs.

The Wilhelm Tell mobile pokie is available for mobile (iOS or Android) users. Players who enjoy real money pokies anytime and on the go can access the Wilhelm Tell online pokie on their mobile or tablet devices as well as the desktop version.

The nervous-looking boy with the apple on his head is a stacked wild. The good news about this stacked wild is that it does not have to land completely within the reel. If it leads to a guaranteed win, you get what’s called a Wild Nudge, when he fills all 3 rows on the reel and becomes a wild symbol for all rows.

Fans of the best pokie sites can get bonus spins by hitting on three, four of five Free Spin symbols from left to right. With five free Spins you also get 10,000 coins; with four you get 400 coins and with three you get 40. With two Free Spins, oddly enough, you do not get any bonus spins but you do get 40 coins.

The Free Spin Mode is the truly memorable feature of the Wilhelm Tell online pokie.

This high-variance online pokie truly turns on your level of bravery when you get bonus spins. Anyone who wants to can go for a big jackpot, but if they come up empty they might rue not having the other nine Free Spins they could have had if they had settled for a 5x multiplier.

The default maximum win of 376,000 is a salient feature of Wilhelm Tell and one that makes this online pokie by Yggdrasil stand out. The maximum win is 7,500 times your stake.

With an RTP of 97% and a 29.5% hit frequency, this is one of the online pokies for real money that low-risk players can also enjoy, even though this is designated as a high-variance game.

Wilhelm Tell is a high-variance online pokie game, but interestingly it can also act more like a medium-risk game for those who stick to the 10-spin choice on their Free Spin Mode. This is an enjoyable feature and helps to make this game a good play.

As for the theme, those who like to have a bit of an old fable whilst they watch the reels spin might also want to look into Hansel and Gretel by NetEnt. That one is a medium variance game with a maximum bet of 200.

For more online pokie games you can play for real money, see our complete PokieSource.co.nz catalog.