NoLimit City is becoming one of the most productive developers on the market. In the past year or so, the studio has made its name known with hits such as East Coast ... Read Full Review 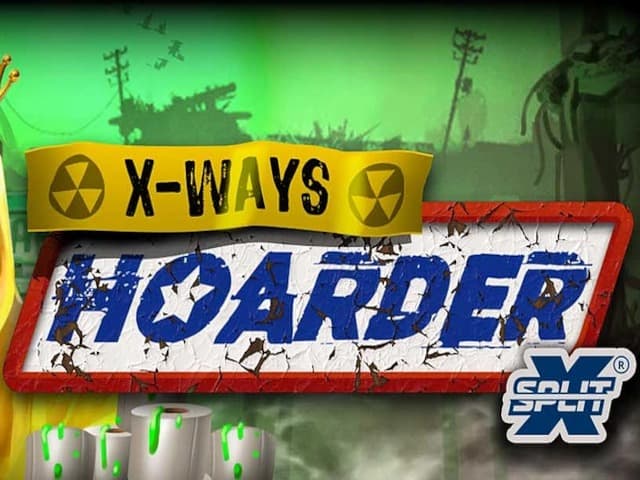 NoLimit City is becoming one of the most productive developers on the market. In the past year or so, the studio has made its name known with hits such as East Coast vs. West Coast, Deadwood, and San Quentin. NoLimit City is known for pokies with thrilling mechanics and fantastic winning potential. That’s certainly the case with the studio’s latest offer called xWays Hoarder xSplit.

That’s not a typo. NoLimit City’s pokies usually have crazy names that showcase the pokie’s gameplay mechanics. In this case, it’s yet another entry to the xWays series, with the xSplit mechanic also in play. Not surprisingly, it’s a pokie that can deliver huge wins to the tune of 11,030x your bet. You can win in 243 different ways in this pokie game, making it one of the top releases in NoLimit City’s extensive pokie catalog.

Play the xWays Hoarder xSplit pokie for free or real money and enjoy the winning opportunities it offers.

The xWays Hoarder xSplit has a rather unique appearance. It’s set in the middle of a nuclear wasteland, with hoarders wearing gas masks and peculiar characters on the reels. Feel-good tunes can be heard from a radio in the background, giving the xWays Hoarder xSplit online pokie a rather distinct look and feel. It may be a bit too creepy for some players, but it reminds us of the look and feel of the Fallout video games, so we’re OK with it.

Click on any symbol on the reels, and it’ll show you the payouts. The dead skeleton in a biohazard suit pays the most, delivering wins of 5x your stake for 5 on a line. The pokie comes with the already familiar xWays and xSplit symbols that have made an appearance in other NoLimit City releases.

The action takes place across 243 betways which can be expanded to 95,760 with the xWays symbols.

Just like all NoLimit City releases, the xWays Hoarder xSplit pokie is available on all mobile devices. Claim your No Deposit Bonus and give it a spin on your Android or iPhone now – no download required!

To start playing, choose a bet from the selector. You can dance across the nuclear wasteland for as low as $0.20 and as high as $100 per spin. Hit the Spin button and cross your fingers for the xWays or xSplit symbols.

Both are key to the action in the xWays Hoarder xSplit pokie. The first one lands on the middle 3 reels only. The xWays symbol reveals a random symbol underneath, with the size ranging between 2-4 symbols.

The xSplit Wilds are particularly fun. They only land in the base game on the three last reels. Whenever they do, they split the symbols to the left on the same row into two, doubling them right away. If a symbol is split more than one time, a multiplier is attached to it.

If an xSplit symbol splits an xWays symbol, the multiplier is doubled for every split. At the same time, the xSplit symbols also act as Wilds, so you can see how they can deliver combinations worthy of a nuclear reaction.

There’s a third special symbol, the Fallout scatter, that gives you access to the Free Spins.

Land 3 or more Scatters to trigger the Bunker free spins round. You get 7 or 10 Bunker Raid Spins with xWays symbols sticky for the duration of the round. There’s a Super Scatter symbol too that can convert themselves to sticky xWays symbols in the bonus round.

Every new xWays symbol that lands on the reels during the bonus round awards an extra spin. On every 3rd collected xWays symbol, your Hoarder Level goes up by 1. Each level adds a new feature to the pokie. Get to level 3 with 3-9 xWays symbols, and the 3rd lowest-paying character and object symbols will be removed from the reels.

NoLimit City has set the RTP for its xWays Hoarder xSplit pokie to 96.14%. That’s solid for a highly volatile pokie with several great features and a maximum win of 11,030x your bet.

The xWays Hoarder xSplit online pokie is a unique addition to NoLimit City’s library. The popular studio is doing its best to deliver unique pokies, and this one certainly qualifies. The post-apocalyptic look and feel give serious Fallout vibes we definitely dig.

On top of that, the pokie comes with 2 unique gameplay mechanics that can deliver the big post-apocalyptic bucks. Try it now for free or cash and enjoy hoarding nuclear treasures at one of the top online pokie sites.

The xWays Hoarder xSplit pokie was developed and published by NoLimit City. It’s one of the most fun studios lately, releasing massive pokie hits such as Deadwood.

The minimum bet you can place on the xWays Hoarder xSplit pokie game is $0.20 per spin. That’s suitable enough for new players and for those who like to use a bit of strategy.

How many paylines does the xWays Hoarder xSplit pokie have?

The xWays Hoarder xSplit pokie gives you 243 ways to win. Those can be expanded to 95,760 ways to win with the xWays and xSplit symbols.

The maximum cash win you can hit in xWays Hoarder xSplit pokie is 11,030 times your stake. That’s pretty high if you ask us, putting it among the best-paying NoLimit City pokies of all time.

Yes, it is. Don’t expect wins in it to come easily. Instead, take things slow in the beginning and try to build a few wins up before upping your bets.

How do the xWays and xSplit mechanics work?

The xWays symbol lands on the 3 central reels. It reveals random symbols underneath and can turn 2-4 symbols into another random symbol for big wins. When it comes to the xSplit mechanic, it splits symbols to two, doubling their payout and adding multipliers on top of your wins.

Does the xWays Hoarder xSplit pokie have a jackpot?

No, it doesn’t. However, the 11,030 max payout is just as big as a jackpot, so we believe you’ll be satisfied.

Does the xWays Hoarder xSplit pokie have a free spins round?

Yes, of course, it does. To trigger the free games round, you will need at least 3 scatters. You get between 7 and 10 free spins with sticky xWays symbols and a few other features.

How to win big in the xWays Hoarder xSplit pokie?

To win big, you’ll need a bit of luck in the free spins round. Every new xWays and xSplit symbol raises your chances of hitting the King of Waste feature, which is the max payout of the game.

Which pokies are similar to xWays Hoarder xSplit?