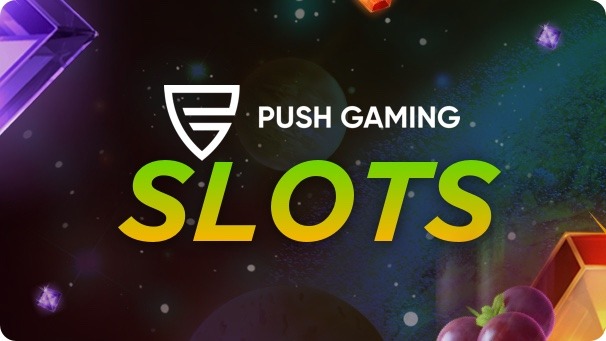 Across online casinos, you will find tons of online pokies you could try out and play. But, as you can see, not all of those pokies offered feel, look and play nicely, and not all of them are suited to your tastes and preferences.

That’s because all pokies offered across New Zealand online casinos are developed by different software providers. Considering these software providers are driven by different principles, come with different backgrounds and offer different quality in their games, you could be overwhelmed the choices at your disposal. And that’s why we at PokieSource have made it our mission to help you find pokies that suit you faster. We are reviewing both software developers and their pokie games, and this occasion, we want to present to you a name that produces pokies with stunning art, Push Gaming. We’ll guide you to find the best Push Gaming pokies and take advantage of all the things they have to offer.

Whenever you find a casino that displays Push Gaming logo, you should know that you’ll be in for a real treat. You’ll be getting the opportunity to choose from a portfolio of delicately designed games that offer stunning visuals, highly engaging features and huge payout potential. The developer has been active in the online gambling scene for a decade, so it knows what players are looking for in pokies, and it delivers it to them. But even though funded in 2010, Push Gaming has been getting more and more popular in the last few years.

Push Gaming focuses on entertaining players, by delivering games to them which are engaging, with unique features and masterful art. That’s why its pokies are featured in the lobbies of some of the biggest, most prominent online and new casino operators.

Another reason why Push Gaming is getting both players' and the industry's attention is that its staff, as well as the CEO and COO, have a background in both online and land-based gambling, and have worked in popular games development and gambling solutions providers such as Cryptologic, Barcrest, and NextGen.

The developer takes its love for land-based pokie games and reflects it in the world of online and mobile gambling, and players have noticed that dedication. Each game that has come out of its studio is completely optimized for mobile play, and that only further makes its games popular among online pokies players. Lately, though the developer has been a bit more focused on producing exclusive new online pokies. Stay tuned to check them out.

How Safe are Push Gaming Pokies?

Being well aware that players are worried about the safety and randomness of the games they’re playing, Push Gaming has not only tested and certified its RNG to ensure that its games are completely fair and random but has also licensed its games.

The developer holds a license to deliver its games remotely by the UK Gambling Commission. It also holds an Alderney Associate Supplier Certificate, and it is licensed by the Malta Gaming Authority, for which it holds a Critical Gaming Supply License. All of these licenses and certificates guarantee players that all of its games are legit, monitored, and above all, completely safe and worth playing.

Push Gaming game portfolio counts near 30 pokie games so far. Out of these games, some have even been awarded for their quality, such as Jammin’ Jars.

Push Gaming Jammin Jars won “Best High Volatility Game” at Videopokies Awards, and for a good reason. First of all, the game was an instant hit, being featured across online casinos the moment it was released. This is due to its cool theme, the Free Spins, the Rainbow feature, the Cascades and the significant payout potential.

Tiki Tumble is another successful release for the developer, mainly because it comes packed with features. To give you a second chance to form a win, the game includes Nudging Wilds. Thanks to the Limitless MultiplieFrs during the Unlimited Free Spins, and the Stacked Wilds, you can scoop the most staggering wins in this pokie.

Push Gaming’s Wild Swarm comes with many buzzing special features, as implied by its name and bee theme. You will be showered with Instant Prizes, Expanding Wilds and Free Spins. But you’ll scoop the honey in Wild Swarm when you reach the Swarm Mode!

The Shadow Order is a more serious pokie in terms of the theme, although largely gamified and suited for all pokies and video games players. It comes with Cascading Wins and Free Spins. The game has 4 levels, where you need the Orbs to land on hotspots in order to trigger the bonus round. As you collect Scattered Rings, you unlock different characters, arriving with their own set of unique skills and special features, to deliver the most precious prizes.

With Golden Farm Push Gaming surprised players with a really unique game, where you will see both reels and Wilds on those reels replicate themselves on each spin, giving you many chances to win. And if you’re lacking chances to win somehow, you have the Respins to give your luck another shot in winning big playing Golden Farm.

Blaze of Ra, Gems of the Gods, Immortal Guild, Fat Santa and Mystery Museum are also titles worth trying out. They all have that special element that would keep you engaged and would take you to the most incredible wins.

As you could notice, Push Gaming has been in the business for a decade, yet it has a portfolio that consists only of around 30 pokies. That’s because the developer takes its time to create the most amazing pokie titles out there. And, whenever a new title is released, it becomes an instant player-favourite pokie across any casino Push Gaming supplies games to.

Among its latest releases, we can mention Joker Troupe, Fat Rabbit, and Razor Shark. All three titles have become an instant hit the second they were released.

Among others released by the software gurus in recent months was the spooky hit Mystery Museum, the mysterious The Shadow Order and heroic and adventure-filled Immortal Guild.

There’s another awesome news for you. You can try out the best Push Gaming pokies for free in the top New Zealand casinos! The developer has made sure to give you a chance to try out its pokies in demo mode before you commit playing them for real money across the best Push Gaming casino sites.

You can try out Gems of the Gods, Viking Clash, Ice Breaker and all of the other incredible pokies by the developer for free across any New Zealand casino powered by Push Gaming.

All games Push Gaming releases are designed in HTML5, to be playable across any device, with any operating system. The developer’s mobile-first approach is another reason why its pokies are so popular among players who enjoy gambling on the go, such as millennials.

Just try out Push Gaming Fat Santa, Blaze of Ra or Immortal Guild, and you’ll see that these are all pokies which were designed to play perfectly on any mobile device, as well as any desktop device.

They are all designed for the best user experience, and that’s why they are some of the most popular mobile pokies available across the sites recommended at PokieSource.

When you explore the casinos listed on our site, you will notice that they all offer promotions and bonuses. But if you read the Terms and Conditions on these offers, you will also see that the bonuses can be used for Push Gaming pokies, in addition to pokies and other games by other leading software developers. Double-check the Terms and Conditions if you're looking for a bonus for a particular Push Gaming pokie, though.

Also, you should know that the majority of pokies by the developer come with their own in-play Free Spins round. Push Gaming Immortal Guild and Fat Santa are just some of them. The Free Spins bonus round is players’ favourite feature in pokies, and Push Gaming wants to make players happy, so you should not be surprised to discover many Free Spins in its games.

The Free Spins round is the one that actually brings the biggest wins in its pokies. For instance, in Immortal Guilds, the minute you trigger the Free Spins, you are showered with Multipliers and Respins, giving you a shot to pick up some massive wins. In Fat Santa, on the other hand, you get 5 Free Spins each time you land the Wild Christmas Pie symbol and the Fat Santa symbol simultaneously, without a limit! This means the chances to win are without a limit, too!

When choosing a casino to join from PokieSource’s casino list, though, you will see that you can also claim Welcome Bonus offers which offer bonuses for the best Push Gaming pokies. Check out the casino’s special campaigns and promos, because these can also offer Free Spins and Bonus Matches that can be used for playing Push Gaming pokies.

You’ve probably concluded by now that Push Gaming is the type of developer that mainly focuses on creating visually appealing pokies that would come with a twist in their gameplay that would keep you engaged for a long time. Well, you should know that there are other alternative developers that are also focused on these things.

One of them is Quickspin. The developer focuses on creating pokies that would look and feel great on any device, thanks to their exceptional graphics. Therefore, if you’ve already gone through all of Push Gaming’s pokies and would like to play similar ones, you can always try out pokies by Quickspin, as they would provide you with a similar experience.

Elk Studios is another incredible developer, which delivers mobile pokies that would take you to the most amazing wins. Just like Push Gaming, it is a mobile-first pokies developer whose games you can enjoy on the go. NetEnt, on the other hand, is currently the leader in the pokies development department. It is a developer that has received multiple awards for many of its pokies, especially for its progressive jackpot pokies, which have been recorded in the Guinness Book of Records for delivering life-changing prizes.

NetEnt might have developed some of the most popular progressive jackpot pokies, but Push Gaming has not. At least not yet. Considering the developer works in mysterious ways, who knows what its next release would offer?

Push Gaming currently focuses on designing video and mobile pokies, but maybe progressives and other types of games are next on its list. At PokieSource, we keep a close eye on the developers we review, therefore, if you’re interested in knowing whether Push Gaming would ever release other games but pokies, make sure you stay with us. We’ll be the first to inform you on that the moment it happens, as we keep track of all the software developers we vet, and we make sure you’re the one that gets informed on new developments first.